Discuss DVDs and Blu-rays released by Criterion and the films on them. If it's got a spine number, it's in here. Threads may contain spoilers.
Post Reply
110 posts
Message
Author

David, that's a very telling story about projecting DEATH IN VENICE. I do wonder whether the softness and overall graininess in the film may have do with the heavy reliance on a zoom lens as you suggest, perhaps combined with shooting in relatively low light conditions. For me, Visconti's most beautifully photographed color film is still by far THE LEOPARD, but that's something very special and it was shot in Technirama by Rotunno with robust and carefully designed lighting.
Top

From what I've seen so far (I've yet to sit in front of the full movie), while I believe it is far from being the worst offender regarding Ritrovata's hands-on, the fact that we can still easily guess which lab did the grading remains quite telling.
Top

I took a closer look at Criterion's Death in Venice, alongside the HD streaming version which is still available on Amazon.

The black crush problem in the new restoration is worse than I originally thought, and I agree completely with Chris's criticisms of the image in his review on this site. Sampling the image with video scopes, it is similar to Ritrovata's The Color of Pomegranates in that the gain in the green channel is pushed up for most of the film, contributing to a greenish cast to varying degrees depending on the specific content of the shot. The other point of similarity is that the floor of the blue channel is pushed down lower than the other two channels. If there are deep blacks in a particular shot, it results in black crush and information is getting lost. The problem was not as readily apparent with the Pomegranates master because it doesn't have as many deep blacks. On this Blu-ray it is more obvious.

Here are some sample scopes to illustrate what I mean:

Shot beginning 05:56 (Lots of blue in this shot because of the blue sky in the background.) 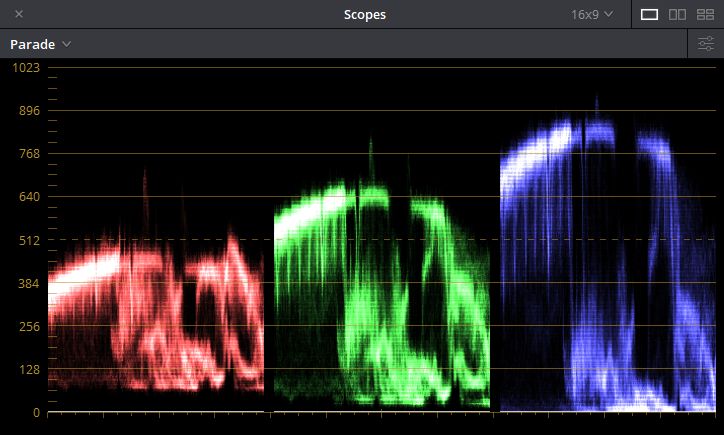 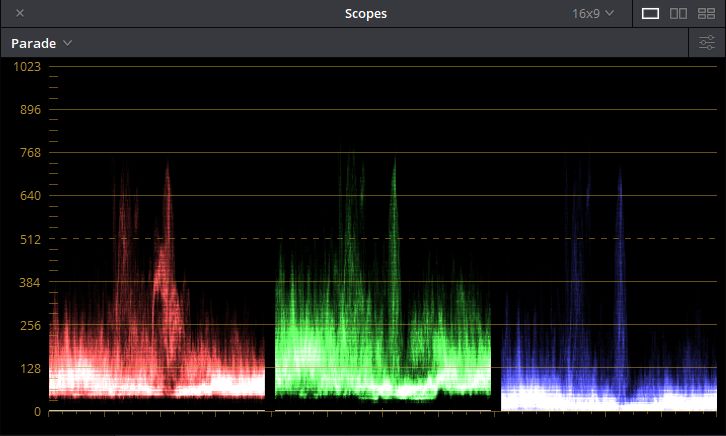 Here are several frame grabs to compare with the older HD master on Amazon. As you can see, sometimes the older master handles flesh tones better, but it is also quite dated and has a red push in many places.

I think consumers have a right to expect video transfers without obvious technical defects. Between this and the dark and teal Mélo, its as if we are entering a new "dark ages" in digital film restoration.
Top

Wow, I expected it to look great with a little green or yellow pushing, which seems to be the trend of late.

But this is unwatchable. The film looks dark, harsh, underexposed. Definitely, black crush. Not the delicate film I recall from a cinema screening or from Warner’s old DVD. Where’s the greys and browns gone?

Looks weird as some other Italian films restored by this house Ritrovata. Such as several scenes in Arrow’s What Have you Done to Solange & Property is no Longer a Theft. But far worse.

(Yes I actually have the Blu ray & am not looking at screen grabs online.)
Top

I don't think the older HD master is faithful either. It does look like a master graded following the habits of that time, especially regarding how pink-ish it can get (as James wrote).
It might be better overall compared to the intensity of the direction taken in the new restoration, but I'd be extremely wary in thinking this is more delicate.

I'm not sure about what issues the Eureka releases have. IIRC, Rocco has an incorrect gamma, but I don't think there was anything else, and I'd argue that's relatively negligible.
Top

I actually just picked up the MOC Conversation Piece since it didn't adopt the obviously incorrect Gaumont color timing. And since the MOC generally is better at keeping audio hiss in tact, it figured to be the one to get.
Top

Both the older Criterion and the now out-of-print Australian Madman edition of The Leopard are my favorite Blu-rays of Visconti color films, followed by Arrow's Ludwig. The Australian Blu-ray of The Leopard is based on the Film Foundation/Bologna restoration, which turned out extremely well even if some have debated the choice of standard 'scope aspect ratio. (I'm fine with it and prefer to watch that restoration, if given a choice.) That said, it seems almost unfair to compare The Leopard to other Visconti Blu-rays because the film is clearly better photographed than any of the other films and benefits from being shot in Super Technirama 70.
Top

tenia wrote: ↑
Sat May 11, 2019 4:14 pm
I don't think the older HD master is faithful either. It does look like a master graded following the habits of that time, especially regarding how pink-ish it can get (as James wrote).
It might be better overall compared to the intensity of the direction taken in the new restoration, but I'd be extremely wary in thinking this is more delicate.

I'm not sure about what issues the Eureka releases have. IIRC, Rocco has an incorrect gamma, but I don't think there was anything else, and I'd argue that's relatively negligible.

I was watching the old dvd on a 4:3 32” TV. It seemed fairly balanced, at the very least. At the time. Any other issues I wouldn’t have seen due to the smallness of the widescreen within the 4:3 screen.

The Criterion Blu ray is just objectionably strange. I was lucky to see a cinema screening and it wasn’t weirdly murky and dark like the current Blu ray. Lots of shadow & colour details are lost.
Top

I appreciate seeing the scopes up thread, the out of balance blue channel is glaring.

But I watched the criterion last week and was stunned at how good the actual video on my system looked. Given the context of the scirocco in the film, I soon was able to not expect the skies to look normal.

The entire grade felt balanced and rich, not too blue nor too yellow and definitely not the old school magenta push seen in some of the above caps.
Top
Post Reply
110 posts