Discuss DVDs and Blu-rays released by Criterion and the films on them. If it's got a spine number, it's in here. Threads may contain spoilers.
Post Reply
45 posts
Message
Author 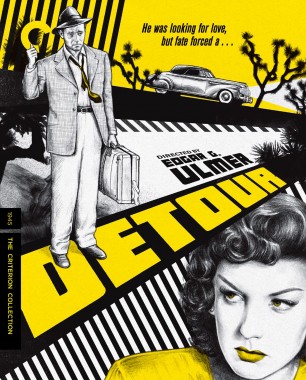 From Poverty Row came a movie that, perhaps more than any other, epitomizes the dark fatalism at the heart of film noir. As he hitchhikes his way from New York to Los Angeles, a down-on-his-luck nightclub pianist (Tom Neal) finds himself with a dead body on his hands and nowhere to run—a waking nightmare that goes from bad to worse when he picks up the most vicious femme fatale in cinema history, Ann Savage's snarling, monstrously conniving drifter Vera. Working with no-name stars on a bargain-basement budget, B auteur Edgar G. Ulmer turned threadbare production values and seedy, low-rent atmosphere into indelible pulp poetry. Long unavailable in a format in which its hard-boiled beauty could be fully appreciated, Detour haunts anew in its first major restoration.

Confirmed by Leonard Martin at ComicCon as forthcoming from Criterion
Top

What has he got to do with it , does he own the rights to the original film?
Top

It's in the public domain but Williams owns high quality prints of many of these types of films. (See Image's numerous releases in the Wade Williams Collection, which usually boast the best picture quality for any given one of the films.)
Top

I haven't seen it since college, but I remember loving it and showing it to many friends at the time. Looking forward to revisting it.
Top

I think the prints used were not belonging to Mr Williams. The link above explains.

It played at the TCM film festival but didn’t see one review or comment about the quality.

Sorry, this isn’t actually what happened during the panel. When asked what his favorite B Movie was, Leonard said Detour. My tweet was poorly phrased and I included a link to the article I wrote when the Janus press release went out earlier this year. So he didn’t confirm anything about Criterion. He just said that he liked the movie.
Top

This came from Glenn Erickson aka DVDSavant aka CineSavant. Another confirmation...

A brief news bit today. Just last night the Academy screened Edgar G. Ulmer’s amazing ‘loser noir’ classic Detour, the new restoration that premiered at the AMIA’s The Reel Thing a few weeks back. As one of the more desired of Hollywood pictures partly tied up in the hands of private collectors, Detour has been languishing in an unrestored state far too long. I wasn’t able to attend last night’s scheduled screening, and am curious to know what if anything was said about the film’s ownership status. Ulmer’s daughter Arianné Ulmer Cipes has been promoting her father’s career and restoring his films for the last 25 years or so; finally bringing the director’s most celebrated picture back to the fore must be a big step for her. I interviewed Arianné about life her with her adventurous filmmaking parents on last year’s Blu-ray of The Man from Planet X. Around 2003 or so she opened her files to show me PRC paperwork proving that Detour wasn’t quite the phantom shoestring film that overzealous reviewers had made it out to be — its shooting schedule was brief but she assured me that the budget ($135,000, I think) was above average for a PRC picture in 1945. When Arianné wrote to let me know me about last night’s screening she hinted that a Blu-ray would be on the way soon, from Criterion. I hope that works out to be true.

Great news, and I really hope that Ulmer's 'Citizen Kane film', Ruthless, might be the next up for restoration and release after Detour!
Top

I've not got it, but those stills it looks pretty good to me!
As for the film, I've not seen it since that Moviedrome screening, but I remember enjoying it a lot.
Top

Sorry Mr Deltoid, I had completely forgotten that!
Top

This looks amazing. It will be a pleasure to watch this all spanking cleaned and stable.
Top

I caught this today at the Film Forum. It looked terrific, which I thought was never ever possible. To see Ann Savage’s crazed witchy expressions in HD is sheer delight. And Tom Neal’s sweat is so prominent that I felt like I was perspiring.

It’ll be interesting to see how Criterion fills out the release. FWIW... One of the FF employees said it’s getting a bluray release in the spring.
Top

Recently caught The Strange Woman on Filmstruck [R.I.P.] since I hadn’t seen many Hedy Lamarr films. I was quite surprised when Ulmer’s name appeared as the director in the opening credits. While the film has several flaws (some, like the ending, which can be be unintentionally funny), It struck me as a first rate proto-feminist campy drama where the female lead rebels against her designated role in society at the time (both as female and poor) by getting what she wants through manipulating men. If Joan Crawford had played the lead, I don’t think the character would have been as complex as in this film, which portrays her at times as purely evil in her deeds & other times as sympathetic in dealing with the hand dealt to her. Apparently the film is far less salacious than the book it was drawn from, but in spite of its flaws (wrong accents, overacting, plot inconsistencies) it really stands out from the similar narratives that Hollywood produced. I’d love to see a Criterion release of it, so hopefully Detour isn’t a one-off.
Top

It like this is actually in the public domain, so it's available everywhere
Top

Interesting that all the extras are Ulmer-specific rather than any broader ones about the film's genre legacy, especially considering that it's of the most widely-seen Noirs given its PD status
Top

Isenberg, I remember him now. When I caught this at BAM (in 2009?), he gave a lengthy introduction. Apparently too lengthy for an elderly French couple, because they started heckling him and they were in turn shouted down by much younger audience members who weren't exactly delicate. Good times.
Top

And here's Alex Cox's Moviedrome introduction to Detour from 1994 (when it was shown in a double bill with Race With The Devil!)
Top
Post Reply
45 posts