Discuss DVDs and Blu-rays released by Second Run and the films on them.
Post Reply
37 posts
Message
Author

Whoever imagined that Christopher Lee would end up on a Second Run DVD!

Mind you, they've just released a disc with Terry Gilliam and Tim Burton extensively featured in the extras.

But happily, they've done it without compromising their principles one iota - anyone who thinks that this is selling out clearly hasn't seen it! (I've owned the big Pere Portabella box for some time.)
Top

Seems a bit unneccesary as the Pere box is English-friendly and very nicely-priced. Maybe if it were a blu ray or if it has some nice (non-box) extras I'd be tempted but hard to see the reasoning behind this release. Maybe one for the ever-expanding Jess Franco market?
Top

Realistically, few people outside this forum are going to risk £40 or thereabouts on what is most likely a complete blind buy. I did, but only after it got rave reviews and multiple awards.

On the other hand, this offers a much more attractively priced entry point.

Remember that guy a decade or so ago who ranted and raved about how "pointless" Eureka's F For Fake was because it was already out on Criterion? It turned out to be one of their biggest sellers.
Top

Grasshopper Films has this in the states. But I'll go with Second Run.
Top

Seems a weird choice for release, but whatever gets Portabella more known is all I care about. Hopefully (not that I need this) they also include one or two of his shorter works for the sake of variety.
Top

Second Run has confirmed that a new interview with Portabella will be included.
Top

Somewhat surprisingly, Second Run have confirmed that this title will be released on Blu-ray in response to a Twitter post from Damien Chazelle mentioning it as a favorite of his. (In the past they've been indicating this as soon as a title's been announced, so it seemed like this would be DVD only)

And they've given a peek at the spiffy artwork: 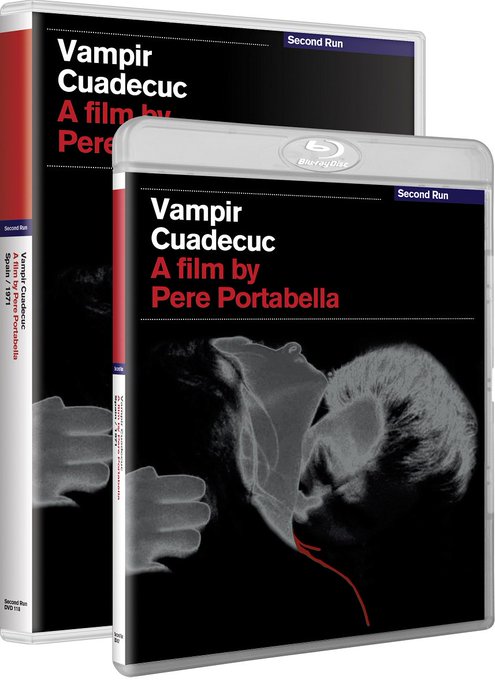 
Made in Spain while General Franco was still in power and shown clandestinely, Pere Portabella's extraordinary Vampir Cuadecuc ostensibly follows the filming of Jess Franco's shocker El conde Dracula (Count Dracula, 1970) starring Christopher Lee, Herbert Lom and the exquisite Soledad Miranda. This experimental 'making of' documentary and investigation into the myth of the vampire, becomes a powerful political metaphor for bloodthirsty fascism epitomised by Franco and tyrants like him, a witty allegory with Dracula as the dictator whose demise is certain.

Our release is presented from a new HD transfer of the film and features a new and exclusive interview with director Pere Portabella, plus two short films and more.

"The film creates a ravishing netherworld that seems to exist in neither the 19th century nor the 20th but in a unique zone oscillating between these eras, just as it seems to occupy a realm of its own that is neither fiction nor non-fiction... But above all is an all-embracing sensual pleasure and humour overriding centuries, generic categories, and conventions" Jonathan Rosenbaum

• Presented from a new HD restoration from original materials
• A new interview with director Pere Portabella
• A new filmed introduction writer and curator by William Fowler
• Pere Portabella’s experimental short films La Tempesta (2003) and No Al No (2006).
• Booklet featuring a new essay on the film by journalist Stanley Schtinter
• Available for the first time ever in the UK

I think that amply answers the question of why this was necessary despite the existence of the Portabella box!
Top

Agreed. I had planned on skipping since i have the boxset, but now I'll definitely be buying this. Hoping for a bluray of Warsaw Bridge down the line.
Top

Agreed. I had planned on skipping since i have the boxset, but now I'll definitely be buying this. Hoping for a bluray of Warsaw Bridge down the line.

Ditto all of this.
Top

antnield wrote:Available for the first time ever in the UK

Mubi UK did show this earlier in 2017, but I didn't get to see it. I'm definitely interested!

They also showed Warsaw Bridge, but I didn't get to see that either,
Top

While we await the first reviews of the feature, Graham Williamson gives his opinion of one of the Pere Portabella shorts included on our VAMPIR CUADECUC disc with this review of No al No
Top