Discuss DVDs and Blu-rays released by Second Run and the films on them.
Post Reply
62 posts
Message
Author

Right you are. I knew it had been released on DVD in the UK by somebody, but for the life of me, I couldn't remember who it was. Maybe AE will step up to the plate, then, but sadly, I think the only other real option is Criterion, who clearly won't be able to do a native 50Hz encode, even though I would hope they'll pitch-correct it.


rapta wrote:But anyway, this is ecstatic news. I feel bad for only having only bought 2 Second Run DVDs to date but I'm well aware that's my loss! I will definitely be supporting the move to Blu-ray, and hopefully this means some older titles will make the transition...though I'm happy if it's only your newer acquisitions as I'm aware it would be a costly exercise in most cases. That said, you could always attempt it with some of the more contemporary directors' work you've released before (Weerasethakul, Lanthimos, Alonso, Gomes etc), as I assume the materials are in a better condition and more easily off-the-shelf?

Funnily enough, I am in a similar boat. I have followed Second Run's output, but the DVD-only status meant that I didn't buy most of what they put out. In fact, the only one I know I have is Confidence. Clearly, with Blu-ray, that can all change, and however many they are able to put out, my hope would be to be able to buy them all.
Top

From Blu-ray.com: Second Run to Begin Releasing on Blu-ray
Top

It may feel like we’ve come a little late to Blu-ray but as a carefully curated and independent label we really had many things to take into consideration, chief amongst them the fact that some of the wonderful films we wish to release may never have materials or size of audience that allow for anything but a DVD release.
Writing here gives us the chance to share our cares and concerns with you... after judging the response we get to the Blu-ray release of HORSE MONEY please know that we hope to do BD’s whenever possible but we will still continue to really need your support for the films we release on DVD, otherwise those great films and films like them will once again be lost and remain unseen.
Top

I'm someone who just wants to own the best version of films that interest me, so you'll be pleased to know that I own a couple dozen of your DVDs as the odds of anyone giving them better than your DVD treatment is slim to none. It's the film first for me, format is second.
Top

Fantastic news. I will buy this, and I am much more likely to by your films on DVD if I know it's the best edition the film can ever get. What sucks is buying something on DVD, and 12 months later it gets released on Blu-ray in USA or Poland.
Top

Up for pre-order
Top 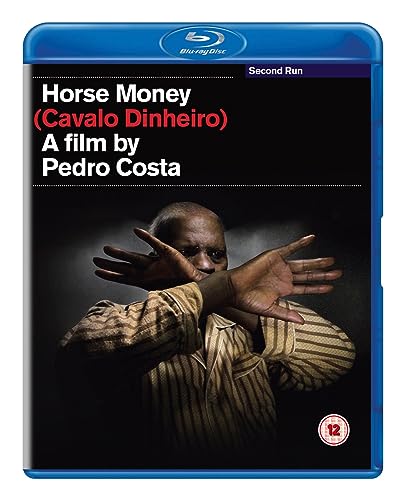 Bikey wrote:Writing here gives us the chance to share our cares and concerns with you... after judging the response we get to the Blu-ray release of HORSE MONEY please know that we hope to do BD’s whenever possible but we will still continue to really need your support for the films we release on DVD, otherwise those great films and films like them will once again be lost and remain unseen.

FWIW, offering something I want on Blu-Ray will immediately grab my attention - a DVD-only release will take some consideration, but in a case like Pedro Costa, I never hesitated to buy a standard-def DVD in the past simply because of the format he chose for his films (at least for most of them). I'll still get the Blu-Ray though because it's great to get the film without the compression that comes with DVD encoding, but I bring it up because it probably makes more sense to judge the sales of a true HD (or film-sourced) picture on Blu-Ray than one shot on DV.
Top

I've put in a pre-order for this since it looks very intriguing.

I only buy blu-rays at this point since I no longer have any shelves dedicated to DVDs (and I have a bit of a compulsion about how my collection is stored and displayed). The fact that I'm watching a large projected screen also impacts that decision (and probably seems a more rational justification to others).

That said, for some reason I had not looked into Second Run's releases prior to this thread, and now that I have, I might go back and pick up a few things on DVD from them. To admit my ignorance, I was unaware they'd released so many films that I want to own. If DVD is the best they'll get, then DVD it is.
Top

ermylaw wrote: That said, for some reason I had not looked into Second Run's releases prior to this thread, and now that I have, I might go back and pick up a few things on DVD from them. To admit my ignorance, I was unaware they'd released so many films that I want to own. If DVD is the best they'll get, then DVD it is.

To be honest if you actually watch their catalog and read the notes it should be rather evident why it would be DVD only, they are for most part forgotten movies.

That said the best movies I've discovered from this label are those whose quality is definitely on the lower end of the spectrum, e.g. Kim Longinotto's films, Romeo, Juliet, and Darkness, Rat Trap, David Holzman's diary, The Ear, Party and the Guests, etc to name some stand out few. These films while fantastic are obviously on the heavily neglected or criminally under seen that it's no surprise there wouldn't be any better transfers, let alone restorations. At the end of the day between never seeing the films to seeing them in the only available condition possible well as a cinephile its pretty obvious which wins out.
Top

Hey Bikey, when you get a chance, I have sent you a PM about this. I wasn't sure if you'd seen it, yet.


Arrow Films to handle sales and distribution for Second Run

Second Run has today announced that Arrow Films will be handling their sales and distribution from 1st February 2016 in Arrow’s first deal of this type.

It was always Second Run’s intention to be part of a cinephile community who care for, seek, discuss, present and watch such films – and now more than 10 years later Second Run have found themselves at the forefront of presenting rare and hard-to-see films from around the world to a dedicated and ever-appreciative UK and international audience.

Arrow Films are renowned for their incredible releases, from TV series to cult and classic cinema, combining state-of-the-art restorations with bespoke, striking and unique packaging.

Arrow are a global market leader in the premium home entertainment.

“This is a great opportunity for Arrow to be able to represent one of the finest and considered labels in the UK. I have been a long-time admirer of Second Run for its curated approach to distribution, its distinct brand and for its many accolades and awards it collects each year. We are excited to be able to represent Second Run’s rich catalogue at this special point in time for the company”

“As we enter our second decade as an independent label, Second Run is really fortunate to begin working with Arrow Films to represent our sales and distribution. As well as being an exemplary sales company, in the past few years Arrow have become one of the very top labels for the discerning cinephile – showing clear focus, an excellent choice of films and presenting their work in the best possible editions.

Arrow’s whole-hearted understanding of a curated label such as Second Run clearly shows me that we will be in good hands – they have even released films from Second Run’s own wish-list! I really believe that this alliance with Arrow will provide us with a wider reach for our films and more opportunities for the filmmakers we work with – which is exactly what Second Run exists to try and do.

As a totally independent label, it has also given us the confidence to make our first foray into Blu-ray, with the release in March 2016 of Pedro Costa’s award-winning and extraordinary film Horse Money.

All this makes the next ten years of Second Run even more exciting to contemplate.”

To launch this new arrangement, Second Run will be releasing Something Different / A Bagful of Fleas: Two films by Věra Chytilová on 29th February; and on 14th March 2016 Second Run will release their first Blu-ray title, Horse Money.

Forthcoming releases from Second Run include the early works of Joshua Oppenheimer (director of Oscar-nominated The Act of Killing and The Look of Silence), Apichatpong Weerasehakul’s stunning debut feature Mysterious Object at Noon and Ján Kadár & Elmar Klos’ Oscar-winning Czech film The Shop on the High Street.

Great news! I hope this means we can buy Second Run releases from the Arrow Store soon.
Top

I am hoping exactly the same thing.
Top

Looks like a healthy release indeed; practically stuffed by Second Run's standards. I hope this release is a big success so we can get more of this.
New and improved optional English subtitles
Top

"A richly rewarding experience that haunts the mind long after viewing"

"Many movies have aspired to the quality of dreams but Costa is maybe the first director to make a film with the genuine rhythms of a shifting nocturnal subconscious... No wonder, then, that that essential label Second Run should choose to make this their first foray into Blu-Ray, a format that shows Costa's undeniable visual brilliance to its best advantage; indeed, when coupled with the generous special features, this is one of the best releases of the year thus far."

The first film to feel like a dream? What is it about Costa that makes critics leap so quickly to extreme hyperbole?

What is it with all these disc reviews that talk about the movie but barely mention the disc at all?
Top
Post Reply
62 posts