Discuss DVDs and Blu-rays released by Second Run and the films on them.
Post Reply
113 posts
Message
Author

This is the mock sleeve only - and because we haven't yet submitted the film to the BBFC, we don't have an idea of the final certificate - so to err on the side of caution ...

Having said that Daisies was submitted to the BBFC by Connoisseur Video in 1994 and received a '15' rating. However, I don't ever recall having seen a copy of a Connoisseur release anywhere. Not sure if it ever made it into stores??
Top

Skritek and Michael, thank you both for the useful information!


MichaelB wrote:As far as I could establish when doing background research for my Valerie intro, she was best mates with Ester Krumbachová - who of course was also a costume designer on many New Wave films. She wasn't an actress, but Krumbachová persuaded to appear in several of her films, presumably including Daisies - into which Krumbachová had a massive creative input, just as she did with most of the things she worked on, and usually far beyond what the credits suggested. The auteur theory has much to answer for in her case, as she's just as important a figure in the Czech New Wave as any of the directors, as they'd be the first to acknowledge.

That makes sense regarding her uncredited appearance in Daisies. I would like to learn more about Krumbachová. She seems to have collaborated in some of the best films of the Czech New Wave. By the way, has anyone seen the doc that Chytilová made about her in 2005? It's called Searching for Ester / Pátrání po Ester.
Top

filmghost wrote:By the way, has anyone seen the doc that Chytilová made about her in 2005? It's called Searching for Ester / Pátrání po Ester.

Yes - and it's very good, albeit slightly frustrating if you bought it in search of concrete facts about Valerie and her Week of Wonders, of which it has virtually none. But it does an excellent job of capturing what Krumbachová was like as a (pretty overwhelming) personality.

The Czech DVD is almost entirely English-friendly, even stretching to subtitles on most of the (generous) extras.
Top

That's the temporary cover, as confirmed by Bikey above.

The film's most unlikely to get an 18 certificate today - also discussed above.
Top

MichaelB wrote:That's the temporary cover, as confirmed by Bikey above.

The film's most unlikely to get an 18 certificate today - also discussed above.

Just thought it made sense to display the cover being discussed rather than having everyone going back to the first post and click a link.
Top

An extremely rare opportunity to see Chytilova's DAISIES on the big screen!
Showing this week at London's Cine Lumiere http://www.institut-francais.org.uk/cin ... -ball.html (as part of their celebration of the French Nouvelle Vague and its influences) on Wednesday 15th April at 6.30pm (where it plays in a double bill with Forman's The Fireman's Ball) and on Saturday 18th April at 3pm.
Second Run's very own Mehelli Modi will introduce DAISIES at the screening on Wednesday 15th.
Top

New cover art up at amazon. 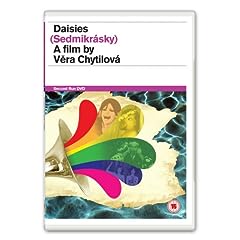 Ew, don't like the cover (didn't think much of Celia's either) but I'll still definitely be picking it up.
Top

I really like the cover - it manages to combine several of the film's key ingredients (a sense of anything-goes absurdism, psychedelic colour schemes, the two lead actresses) into a single image that you're initially not sure how to "read". Which was presumably the intention.
Top

No, it's a swing and a miss
Top

Thank you MichaelB - we love it too.
Top

I also like the cover. It uses some specific images from the film in a subtle and intriguing way, at the same time placing the film with a context of Sixties psychedelia. The horn with the rainbow colors streaming out even made me think immediately of a specific image from the film, so as far as I'm concerned it "works."
Top

I like the cover okay. Like I said, the shape of the colors is a little sgt. peppery, but it manages to capture the comic zaniness of the film. I just preordered it (along with some MoC titles I've been waiting to pick up) today. Time to find a charity to donate my copy of the Facets version to...
Last edited by jbeall on Mon Apr 20, 2009 9:21 pm, edited 1 time in total.
Top

It's about a hundred times better than this:

The film runs 53 minutes and is fascinating insight into the life and work of of one of Czech cinema's most important filmmakers.
Top

I can't comment on the documentary, as Second Run sent me an early test pressing of Daisies created before the rights were cleared (it was added at literally the last minute), but I can certainly endorse the transfer of the main feature, which is right up there with the best of Second Run's Eastern European efforts.

In fact, on the basis of the quick spin I've given it, it might well be the best - unlike Valerie and her Week of Wonders, exposure levels seem to be bang on, the source print is in excellent physical condition (with the understandable and presumably unavoidable exception of the numerous stock-footage flash-cuts), and as far as I can see the correct balance is maintained between pure black-and-white, tinted monochrome and full colour.

And the optional subtitles make a big difference - unlike my old BBC2 VHS tape or the Facets disc, everything is now completely readable. I can't wait to watch it in full.
Top

I wonder what people will think of Chytilová, she's not exactly sympathetic.
Top

Full DVD detail on DAISIES is now up at our website.

And if you scroll down that page, you'll see that the Trailer is just a click away. Would love to know what you will think of it.

Really hoping that you will be happy with the way our DAISIES DVD has turned out...
Top

Hot damn! If that trailer is taken from the actual SR disc, then the transfer is a steep upgrade on the Facets indeed! =D> =P~
Top

jbeall wrote:Hot damn! If that trailer is taken from the actual SR disc, then the transfer is a steep upgrade on the Facets indeed!

I'm delighted to confirm that the transfer does indeed look like that.

Assuming Second Run does what they did with Valerie - i.e. take the restored master created for the Czech DVD and re-encode it at a higher bitrate to preserve as much detail from the Digibeta source as possible - then this will clearly be the definitive Daisies disc short of a Blu-ray remaster.

And I honestly can't see that happening any time soon!
Top

Bikey wrote:Full DVD detail on DAISIES is now up at our website.

And if you scroll down that page, you'll see that the Trailer

That trailer looks very promising. But are there no dialogues in the Movie? Damn, I have to read about the Czech New Wave. Or even better, about all eastern European New Waves in general.
Top

golgothicon wrote:That trailer looks very promising. But are there no dialogues in the Movie?

Plenty, but it's so visually quirky that you don't exactly need words to sell it.

On a more practical note, retaining dialogue would mean that the trailer would need its own set of subtitles, and I think we'd much rather Second Run spent its limited funds on things like this Chytilova documentary!
Top

Fantastic trailer. Did SR themselves make it, or is it pre-existing?
Top
Post Reply
113 posts