Discuss DVDs and Blu-rays released by Criterion and the films on them. If it's got a spine number, it's in here. Threads may contain spoilers.
Post Reply
74 posts
Message
Author 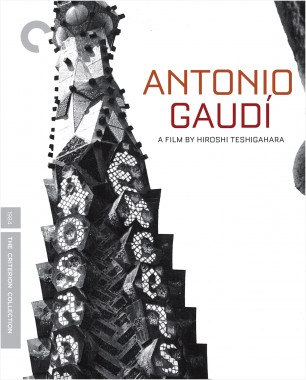 Catalan architect Antoni Gaudí (1852–1926) designed some of the world's most astonishing buildings, interiors, and parks; Japanese director Hiroshi Teshigahara constructed some of the most aesthetically audacious films ever made. In Antonio Gaudí, their artistry melds in a unique, enthralling cinematic experience. Less a documentary than a visual poem, Teshigahara's film takes viewers on a tour of Gaudí's truly spectacular architecture, including his massive, still-unfinished masterpiece, the Sagrada Família basilica in Barcelona. With camera work as bold and sensual as the curves of his subject's organic structures, Teshigahara immortalizes Gaudí on film.

• High-definition digital restoration, with uncompressed monaural soundtrack on the Blu-ray
• Interview with architect Arata Isozaki from 2008
• Gaudí, Catalunya, 1959, footage from director Hiroshi Teshigahara's first trip to Spain
• Visions of Space: "Antoni Gaudí," an hour-long documentary from 2003 on the architect's life and work
• BBC program on Gaudí by filmmaker Ken Russell
• Sculptures by Sofu—Vita, a 1963 short film by Teshigahara on the sculpture work of his father, Sofu Teshigahara
• Trailer
• PLUS: An essay by art historian Dore Ashton, a 1986 reminiscence by Hiroshi Teshigahara, and excerpts from a 1959 conversation between Hiroshi and Sofu Teshigahara on their trip to the West

Wow! Does anyone have any more information on the Ken Russell Monitor film (Lino or MichaelB?)

Really? This is getting its own release? Well I'll be... I guess there goes my hope of a Criterion Rikyu or Man Without A Map anytime soon.

I might get it if only for the Ken Russell film.
Top

Cold Bishop wrote:Really? This is getting its own release? Well I'll be... I guess there goes my hope of a Criterion Rikyu or Man Without A Map anytime soon.

Yeah, it's disappointing that this is (likely) the only other Teshigahara we get anytime soon. As Schreck said in a post elsewhere, it would've been nice to see this as a supplement to one of his other films instead of its own release.

It will be nice to see Gaudi get a decent transfer, though, as the Image DVD (the only DVD release in the world) is dire. And it shoud sell well to the architects who flood screenings of it (if I remember the post about that correctly).

Extras look average, and not enough to fill out a two-disc set (especially given the brevity of the main feature-it better have a kick-ass encoding). I enjoyed this a lot (even seeing it via the aforementioned crappy Image DVD), but perhaps not enough to take the dive.
Top

colinr0380 wrote:Wow! Does anyone have any more information on the Ken Russell Monitor film (Lino or MichaelB?)

Not me. MichaelB is the real Russell savant around here. I'm just an enthusiast.


Cold Bishop wrote:I might get it if only for the Ken Russell film.

The documentary is worth it even if it didn't come with any extras with it. The Russell docu is icing on the top of a very good release all around!
Top

Seems like a great release: three Teshigahara films and an early Russell sounds like plenty of value for money to me.
Top

Here's to a Russell Monitors Eclipse!

zedz wrote:Seems like a great release: three Teshigahara films and an early Russell sounds like plenty of value for money to me.

Do you know how considerable they are in terms of length? Quality is better, sure, but are the Teshigahara shorts and the Russell long (coupled with the other features) enough to justify the second disc/upper-tier price?

EDIT-I had me a look. The Russell-Monitor bit seems to be 15 minutes long and fairly straightforward. Here's a BFI screenonline entry about it.

I also found info on Sculptures by Sofu â€“ Vita (1962, 11 mins), which is a wordless evocation of sculptures made by Teshigahara's father, layering images and sound effects to explore their sinuous forms, seen here.

I couldn't find any info on Gaudi, Catalunya 1959, but I found this on Senses of Cinema:


As early as 1959 [Teshigahara] had written of the impact of his first glimpse of Gaudi's cathedral:

Shortly after entering Barcelona, four grotesque steeples appeared before me. Their peaks seemed to domineer over the city shining with gold. I was struck with a sense of conviction. As I approached, the holes pierced in those four tense conical structures, just like a tremendously appealing demonic whisper, clutched me with force. What I was looking at was Gaudi's last masterpiece Sagrada Familia.

I know I shouldn't bitch about the features; I'm happy with the release as it stands, slight though it seems to be for a 2-disc/$40 title (it would seem that all the bonus features and the film could've fit on one disc as a $30 package). I was hoping for more, but this'll have to do.
Last edited by Cronenfly on Sat Dec 15, 2007 9:06 pm, edited 6 times in total.
Top

Some Russell fan site had this to say about the doc:

"About the Spanish architect. Huw Wheldon gives the commentary and it is a reasonable documentary with good photography of his buildings. There are interesting facts mentioned- Gaudi's hatred of flying buttresses, and that all his building were merely experiments for his cathedral. But it lacks any bite or excitement. 15 minutes."
Top

I actually suggested a Russell Eclipse back when they were soliciting ideas. The obvious choice would be the various composer films: Elgar, Delius, Bartok, Prokofiev, Debussy.........only Elgar & Delius are available on R2. We should all hit them with emails suggesting this now that there seems to be a door open on availability.

I only just saw this! Wow I'm so pleased, can't wait for this. Bring on The Ruined Map!
Top

Don't get too excited about the Russell short - you'd never guess the director if you didn't know in advance (which certainly isn't true of many of his other BBC films).

There's nothing wrong with it per se - it's a good, solid introduction to his work, and fully worthy of a BBC Monitor slot - but its visual flamboyance is entirely courtesy of Antoni rather than Ken.

But it's excellent news that Criterion has started trawling through Russell's BBC back catalogue, especially as the BFI releases of Elgar and Song of Summer are out of print.


unclehulot wrote:I actually suggested a Russell Eclipse back when they were soliciting ideas. The obvious choice would be the various composer films: Elgar, Delius, Bartok, Prokofiev, Debussy.........only Elgar & Delius are available on R2.

Not any more, sadly - the BFI's licensing deal expired earlier this year and proved impossible to renew. So grab those DVDs when you can, as I've no idea when/if they'll be reissued.

Incidentally, does anyone know what the situation would be regarding releasing Russell's Dance of the Seven Veils in the US?

In Europe, it's effectively banned until 2019, as the composer Richard Strauss died in 1949, and European copyright law requires his estate to grant permission for any screenings/distribution within 70 years of his death. And given that the film depicts him as a crazed sex-obsessed Nazi who was only in it for the money, such permission is unlikely to be granted any time soon.

But what's the situation on the other side of the Atlantic?
Top

MichaelB wrote:But what's the situation on the other side of the Atlantic?

Crazed sex-obsessed Nazis -- only in it for the oil and war profits -- are still running the country.
Top

The following bit was added to the specs:

- Visions of Space: Antonio Gaudí, a one-hour documentary on the architect's life and work
Top

Great news on the added extra. I'm eagerly looking forward to devouring this set. I loved the Teshigahara boxset and can't wait to see more of his work but I also must admit to having more than a passing interest in architecture, in general, so this release seems fantastic.
Top

A wise inclusion, now it's starting to feel closer to a justified release
Top

The DVD Beaver review has been updated.
Top

Just for completeness the Gaudí documentary was the third in the Visions of Space series. The first two documentaries focused on Albert Speer and Ludwig Mies van der Rohe.

The lack of love for this film surprises me. What a great film experience. Definitely on of the best hour one can spend getting lost throughout beautiful images and sound.
Top

Having been to the Sagrada Familia, I LOVE this film too. Truly breathtaking, but definitely agree that the score wasnt very fitting in many instances.
Top

Antoine Doinel wrote: The only thing that didn't work at all for me were the more contemporary portions of Toru Takemitsu's score. Too often they sounded like bad, 80s experimental "synth music". The score has dated really badly and is obtrusive in many places when the focus needs to be Gaudi's works.

Oh well, I thought Takemitsu's score was one of the better examples of this type of thing. While nothing like Takemitsu's music for the concert hall, it's not terribly like his other film scores either, so I enjoyed the fact that he was trying something new. Perhaps the late hour which TCM aired it last year contributed to the effect it had on me!
Top

Interested if there are any reactions subsequent to the above. Deciding whether to add this to my already groaning cart for the sales, am wondering if it's a curio, part documentary, part film worth seeing on its own merit--or better, both.
Top

I didn't liked the score. Mostly the kind of slowed down glass harmoncia sound that plays during almost the whole thing.
But I can say that it's a sure choice for anyone interested in Gaudì. Who's not?

Nobody cares: I have seen the movie with one person snoring next to me, and two people behind me commenting everything they saw on the screen; "It's beautiful", "Oh, I like that" "it's the Sagrada Familia in the background!", surely my worst screening experience to date.
Top

I was pleasantly surprised--a very nice contemplative experience, and didn't last too long. (I sound so bourgeois, I know!). I've been to Barcelona, but the only thing I saw that I knew was Gaudi's was the Sagrada Familia. So much of his stuff is wonderful, and since my girlfriend was working just a few feet away, I had to turn down the volume and so the score wasn't intrusive.

I was a little sketchy on this film's inclusion in the collection, but I'm very glad I saw it.
Top
Post Reply
74 posts