Discuss DVDs and Blu-rays released by Criterion and the films on them. If it's got a spine number, it's in here. Threads may contain spoilers.
Post Reply
64 posts
Message
Author 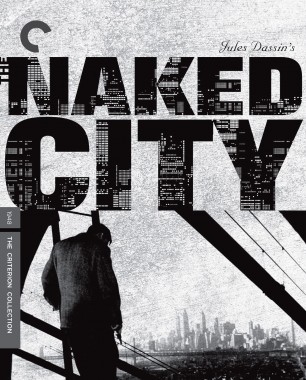 "There are eight million stories in the Naked City," as the narrator immortally states at the close of this breathtakingly vivid film—and this is one of them. Master noir craftsman Jules Dassin and newspaperman-cum-producer Mark Hellinger's dazzling police procedural, The Naked City, was shot entirely on location in New York. Influenced as much by Italian neorealism as it is by American crime fiction, this double Academy Award winner remains a benchmark for naturalism in noir, living and breathing in the promises and perils of the Big Apple, from its lowest depths to its highest skyscrapers.

• On the Blu-ray: New 4K digital restoration by TLEFilms FIlm Restoration & Preservation Services, with uncompressed monaural soundtrack
• On the DVD: Restored high-definition digital transfer
• Audio commentary from 1996 featuring screenwriter Malvin Wald
• Interview from 2006 with film scholar Dana Polan
• Interview from 2006 with author James Sanders (Celluloid Skyline) on the film's New York locations
• Footage of director Jules Dassin from a 2004 appearance at the Los Angeles County Museum of Art
• Stills gallery
• English subtitles for the deaf and hard of hearing
• PLUS: An essay by author and critic Luc Sante and production notes from producer Mark Hellinger to Dassin

Wow I can't believe they got Malvin Wald to do a commenary!
Top

Derek Estes wrote:Wow I can't believe they got Malvin Wald to do a commenary!

It's a shame that they couldn't include the pilot episode of the late-50s T.V. spinoff. Image has the rights.
Top

Jeff wrote:It's a shame that they couldn't include the pilot episode of the late-50s T.V. spinoff. Image has the rights.

That would be cool, it would then move this to a 2 disc I'm sure.
Top

Just because Image released it on DVD, doesn't mean they have rights to it.
Top

The commentary appears to be ported from the laserdisc that also had a second commentary by actor Don Taylor. If the Taylor track wasn't that great, as that review seems to indicate, it would have been nice to present excerpts as an audio interview, but never mind - what's there certainly looks comprehensive enough.
Top

Really wish they could track down some of the "lost footage" of this film-- which disappointed Dassin so much upon it's excising by the studio-- which in brief sympathetically told many of the "lesser stories" to be seen all around the city's bleak alleys and byways. (Like the voices of the dj, building porters, in the opening montage... just a bit seedier.)

Either way, good to have something beyond the old Image/Kino transfer on this (which actually wasn't all that bad tell the truth).

Gorgeous cover, wonderful extras (love Luc Sante's work!). I can't wait to get my hands on this.
Top

The cover design is CLASS. And the collection could use some fresh Dassin! Criterion is off to a great start for '07 I must say.
Top

soma wrote:The cover design is CLASS. And the collection could use some fresh Dassin! Criterion is off to a great start for '07 I must say.

Maybe I'm not being critical enough, but I think criterion's always on the ball. Even when the releases for a particular month underwhelm initially, I get them on netflix and am almost always pleasantly surprised, if not blown away. They release the occasional lemon from time to time, but they're consistently impressive in their releases.

Judging from the enthusiasm I've seen on the criterion boards about this film, I may buy it sight unseen.
Top

This sounds right up my street but I don't really know anything about it.
Can anyone give a short synopsis/ review?
Top

The Naked City is in some ways a standard police procedural. A young woman is killed, and the department swings into action, led by the almost-but-not-quite-twee Barry Fitzgerald. Some twists and turns follow.

...What this synopsis misses, however, is the majestic and innovative cinematography, Dassin's unique and biting humor, and a quite moving piece of narration.

Some (Pauline Kael, among others,) call it unremarkable save for the camerawork. (Which still, I'd say, demands a viewing.)

Others (such as myself) would call it an utter and unqualified success, one of the essential noirs of the '40s.
Top

jt wrote:Can anyone give a short synopsis/ review?

What the hell is up with this rounded corner stuff popping up as a complaint now in his reviews? Is disc reviewing that uneventful that you need to erect straw men of this size?


The comparison is fairly cut-and-dried - the, now out-of-print, Image Entertainment DVD is interlaced (see image below), shows frequent rounded corners and is very dark with highly visible damage marks (so dark that some background details are lost). The Image Ent. does show more information on all 4 sides, but with the rounded corners this is probably not meant to be shown theatrically. The Criterion transfer is again pictureboxed (see our description of 'pictureboxing' in our Kind Hearts and Coronets review).

On one hand we hit Pictureboxing and cropping, then on the other hand we're now smacking the discmakers in the head for showing the edges of the frame thus proving that nothing's been cropped or overscanned. This is turning into a Comedy of the Very Serious TechDweebs!

Chalk another one up for the Damned If You Do & Don't Dept.
Top

So, can we return to the key issue, which is that Pauline Kael is correct in calling the film "unremarkable, save for the camerawork"? Proponents of this movie are careful to say that it is "more a police procedural than film noir", which is another way of saying that it is tedious, by the numbers, and distinctly uninvolving in its storytelling. Bit players may be great, but we are stuck mostly with the twinkle eyed Barry Fitzgerald who resembles no Irish cop ever seen on the streets of the Naked City. Yes, the location photography of the city in the 1940's is just wonderful, and any reason to see the movie begins and ends there.
Top

The longest time this has been one my best-loved cops-and-criminals films. No, it's a noir in the traditional sense, but it is the absolute standard of what it does offer: phenomenal location shooting, a great story peppered with remarkable characters and an absolutely fantastic sequence that ends the film (I won't go too much into here for those who haven't seen the film).

And "police procedural" isn't just a euphenism for "shoddy noir". If you're a fan of Law & Order and Dragnet, The Naked City is pretty well where it started. And what a helluva start.
Top

Ditto, I love this film and always have. It never gets old, and the little slices of life, the vignettes of the strangers-- dj's, typesetters, cleaning ladies-- are entirely unique even for a non-'procedural'... and actually are remnants of the original lost cut of this film which got far deeper into the sad corners of NYC.
Top

I wonder if the stills gallery included in this will have some of the set photographs taken by Stanley Kubrick for Look Magazine.
Top

20 minutes into this and had to pause and check to see if anyone has complained about the sound-picture synch problem. Slight, but somewhat annoying. Is this my system? my disc?
Top

I'm surprised no one has replied to this. I'm getting my copy tomorrow, I'll let you know.
Top
Post Reply
64 posts