Discuss DVDs and Blu-rays released by Eureka/Masters of Cinema and the films on them. If it's got a spine number, it's in here.
Forum rules
Please do not clutter up the threads for MoC titles with information on pre-orders. You can announce the availability of pre-orders in the MoC: Cheapest Prices / Best Places to Buy / Pre-Orders thread. Any posts on pre-orders in any other thread will be deleted.
Post Reply
43 posts
Message
Author 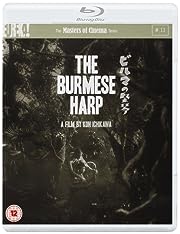 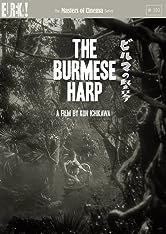 A rhapsodic celebration of song, a brutal condemnation of wartime mentality, and a lyrical statement of hope within darkness; even amongst the riches of 1950s' Japanese cinema, The Burmese Harp [Biruma no tategoto], directed by Kon Ichikawa (Alone Across the Pacific, Tokyo Olympiad), stands as one of the finest achievements of its era.

At the close of World War II, a Japanese army regiment in Burma surrenders to the British. Private Mizushima is sent on a lone mission to persuade a trapped Japanese battalion to surrender also. When the outcome is a failure, he disguises himself in the robes of a Buddhist monk in hope of temporary anonymity as he journeys across the landscape – but he underestimates the power of his assumed role.

A visually extraordinary and deeply moving vision of horror, necessity, and redemption in the aftermath of war, Ichikawa's breakthrough film is one of the great humanitarian affirmations of the cinema. Nominated for a Best Foreign Language Film Oscar and honoured at the Venice Film Festival, The Masters of Cinema Series is proud to present this landmark film on Blu-ray for the first time.

I am happy with the Criterion release but if the extras are great or if it includes the remake I will double dip and buy it.
Top

Any time frame when to expect this? Any special features?
Top

September according to the MoC site
Top

Evidently, this has been delayed until Janurary now!
Top

How's this coming along Nick? Any news on the extras or whether this will be Blu?
Top

Nick, assuming this does receive a Blu release, is it likely to be region-free?
Top

No - it would be Region B, unfortunately.
Top

I'd be surprised if it wasn't. I think it is a smart move, opting for a Blu-only release. there have been so many Criterion sales over the last year, a competing dvd release could be a slow mover. I guess you will be number-crunching the City Girl figures over the next few months, Nick. Even the blu-ray nay-sayers must concede that the Dvdbeaver screencaps of City Girl are just a little bit special. Good luck with the blu only leap of faith.

securing both versions for bluray would be fantastic.
Top

The only version/edit that exists is the one that Criterion put out. The original, longer, 2-part cut does not exist anymore.

There is another similar version which is just like Criterion's but which has ingrained Japanese subtitles vertically down the righthandside only when Burmese is spoken.
Top

I think he means the 1985 remake by Ichikawa.
Top

Ah, well that's with Toho, and the original is with Nikkatsu. So that would be like us putting out Losey's M with Lang's M together in one package, we couldn't do that without charging double for it (that's overlooking the other tie-ups with Losey's M for the sake of the example).

Which is why releases like Criterion's THE KILLERS are so rare (and so special).
Top

Thanks, Nick, I thought that was the case.
I would say that while it is wonderful to have Kon Ichikawa on Blu-Ray, it is such a shame that so much of his work is not even available on DVD. We can but hope.
Top

Floating Weeds from Criterion would be a more appropriate example since the original and remake are from the same director and two different studios (Shochiku and Daiei)...

I just saw an MoC web page that lists it as such in the top right corner...
Top

might be August 2010 on BD. I'll change the website, it's an overhang from a hopeful schedule from last year.
Top

peerpee wrote:might be August 2010 on BD. I'll change the website, it's an overhang from a hopeful schedule from last year.

Is a BD issue definite, Nick? I'll happily trade up from the Criterion for a MoC Blu. =D>
Top

It's looking good, but not definite yet. Will know for sure in about 5 weeks.
Top

I guess there is no way to tickle Toho's funny bone to get them to OK the remake as a bonus film? I was surprised that recently let UK's Third Window to release "Kamikaze Girls" in a region free bluray, even though there isn't a BD in Japan as of yet....

If it had both films together, I would gladly pay to get it out. But if it means a delay....
Top

Any chance that Iwai's Ichikawa Kon monogatari will make it as an extra?
Top

In any case, "The Burmese Harp" seems no longer to be #68, which indicates blu exclusive, I suppose. On the website, there is now a small size cover for Feyder's "Le grand jeu" in its place (and nice it looks).
Top

Re: The Burmese Harp

Coming in August on BD