Matthias and Maxime? I though Dolan never has issues getting his films released
Top

I can see why he'd have trouble getting distribution in the wake of the Life And Death Of John F. Donovan fiasco
Top

Has anyone picked up The Wild Goose Lake?
Top

Regarding Dolan, It's Only the End of the World went straight-to-Netflix like a year after its Cannes debut, but not like released by Netflix like The Ballad of Buster Scruggs or even Happy as Lazzaro. It was more like it was uploaded in the middle of the night. Tom at the Farm didn't receive distribution for two years. The Death and Life of John F. Donovan apparently doesn't have any distribution, online or otherwise. Netflix quietly uploading a film starring Natalie Portman and the guy from Game of Thrones seems like a best case scenario. Matthias & Maxime was met with indifference and doesn't have any stars. Maybe someone sees something in it? I just learned from this thread that Strand picked up Yomeddine and an Egyptian comedy getting picked makes sense. The stakes in Dolan's latest seem very low and, on the basis of It's Only the End of the World, I don't know capable he is of dramatizing his worn-out scenario such that it feels fresh.

I haven't heard about it's release stateside, but I thought it sounded like a decent enough prospect for release---decent reviews, lauded for its direction and stylish cinematography, and firmly genre).
Top

Omensetter wrote: ↑
Sat May 25, 2019 8:55 pm
Only three films from last year's competition didn't end up with distribution---Ayka, Yomeddine, At War, so I'd say it's odds are still very good.

Just scanning the competition, I'd say the films most in danger of not getting distribution are Matthias and Maxime and Mektoub My Love: Intermezzo.

Also AT WAR will be released via Cinema Libre in NY and LA this July. So AYKA is the lone holdout from the 2018 lineup!
Top

Haven't even heard of Cinema Libre! Good for Brize. It looks like their other big title is another 2018 Cannes dud, the Cotillard-starrer Angel Face.
Top

4. “Once Upon a Time…in Hollywood”

1. Celine Sciamma, “Portrait of a Lady on Fire”

3. Quentin Tarantino, “Once Upon a Time…in Hollywood”

2. “Portrait of a Lady on Fire” (Celine Sciamma)

4. “Once Upon a Time…in Hollywood” (Quentin Tarantino)


“Almodóvar isn’t only the greatest and most influential Spanish director since (Luis) Buñuel, he is a filmmaker who has offered us the most multifaceted, controversial and provocative portraits of post-Franco Spain,” said Venice festival director Alberto Barbera in a statement, noting that he imbues his topics “of transgression, desire and identity ... with corrosive humor and adorns with a visual splendor.”

Earlier in this thread someone mentioned Kiyoshi Kurosawa normally being in UCR. It's usually the case with Claire Denis as well. Why is it that these two directors are often left out of the main competition? They've both been healthily represented by premier boutique labels like Criterion and Eureka and are among the most praised figures in world cinema of the last 20-25 years, so surely they'd have enough cultural capital to make it into the main competition.

In any case, maybe filmmakers should call it a day at playing the Cannes game once they win big on the festival circuit. This is basically what both Fellini and Bunuel did. Interestingly, Bresson is one of the few major directors to never win the top prize at one of the Big Three festivals: Cannes, Venice, Berlin. At least during the "cinema d'auteur" era. Rivette's another one. And Truffaut, and Almodovar, so okay...never mind.
Top

"Un Certain Regard" as the name says is destined to quirky films and odd filmmakers with a peculiar look... things that don't appeal to the majority of the Press. The Competition is purely for safe bets and seasoned participants and awarded winners. Competition is more "mainstream" and UCR is for the mavericks, all in the context of world art cinema.
It's a privilege to be in UCR, it means you're different!
From what I heard, when the Fremeaux team selects the films, there is only one list for both sections and then the films move from Competition to the parallel section, or the off competition, etc.

And we know the juries make democratic votes based on feelings, and make mistakes in regard to film history. The system is not perfect, but it should never be. Even if the jury was 100% film critics they wouldn't even agree on the palme d'or. Just take a look at the Cannes ratings in the press (a film can be considered both a palme d'or and a travesty by film critics! there is no consensus, no measure).
If it was a popular vote of all festival goers, the results would be middle-of-the-road and disputed by many.
It's a lose-lose situation. Nobody's happy. It's either we cope with the jury partial decision or we don't have a competition (which is a sports concept applied to art)
Top

But I'd say it's been a while since there was a Palme d'Or that was truly disliked by a large number of critics. Maybe Dancer in the Dark. And Fahrenheit 9/11. Of course you have guys like Richard Brody who as a matter of course pan just about any contemporary festival darling auteur. That's not to say I dislike Brody. He's often an engaging read but a tad predictable in that you often know ahead of time how he'll react to certain types of films. I'm not saying Brody's Armond White. Much of what he says about the state of contemporary French cinema is spot on, but you sometimes get the sense he's reviewing a film by Haneke or Farhadi without having actually watched it and is merely entering into a diatribe against the Haneke-esque.

I know I'm straying off topic here, but I'd say Brody's mostly bored with a "cinema of ideas" and is more interested in the sensual/aesthetic pleasures offered by cine-plastics(for lack of a better term). At least that's my impression. So he's more interested in filmmakers who "make cinema" in the way someone like Ophuls, Tati, or Mizoguchi "made cinema".
Top

Who dislikes Dancer in the Dark?
Top

Both of his examples were broadly well-liked worldwide
Top

Well I mainly had in mind the fact that Dancer in the Dark had a 61 on metacritic which is low for a Palme winner. That’s all.
Top

That's fantastic news. She hasn't made a less-than-great film and is one of the best directors in the world. Cannes rejecting Zama was one of the more baffling dismissals in recent memory. I really hope she's getting financing, so we don't hafta wait another nine years. That's about a great a president Venice could have gone with.
Top

She could have played OOC or in UCR, but she didn't receive an invitation.

Venice didn't even put her in Competition.

But, you know, I probably care about this more than Martel.
Top

Armando Iannucci’s The Personal History of David Copperfield will open the London Film Festival as a ‘European premiere’, which means it will likely appear in Toronto or Telluride first.
Top

Alejandro Amenábar's While at War will compete at the San Sebastian Film Festival.
Top

This time of year finds me scouring a lot of sources I wouldn’t usually read for potential festival news and rumors, and this self-editing fail (from the Jeff Wells-esque Jordan Ruimy’s World of Reel) made my day: 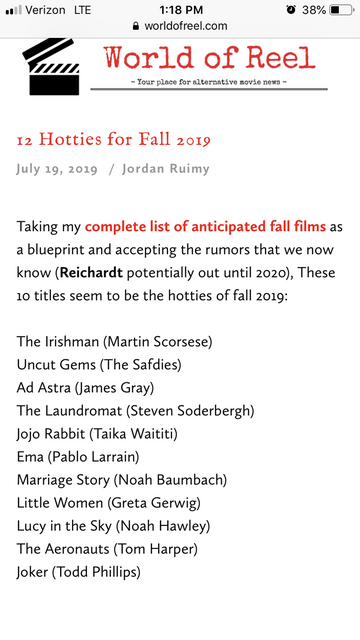