I'm sworn to secrecy 'til it's announced, but at least one of TT's recent Fox announcements will be getting a deluxe treatment in the UK soon
Top

domino harvey wrote:I'm sworn to secrecy 'til it's announced, but at least one of TT's recent Fox announcements will be getting a deluxe treatment in the UK soon

In for Little Murders and Marigolds myself. Had never heard of the former until it was teased in last month's newsletter, but I love 70's Elliot Gould (and Arkin of course), and the latter is one I've wanted to see for a long time now. Will definitely try and get the other two shortly afterwards as well, with emphasis on the Mankiewicz (since I'm far more likely to hang onto it after seeing it).

Quick question, Michael - a new interview with Elliot Gould is mentioned on the Amazon specs for Little Murders. Still planned, or has that idea since been scrapped?

PS: stunning artwork and extras as usual, gang. A very strong month, that's for sure!
Top

Suddenly Last Summer for me.
Glad I hadn't bought the TT edition yet.


mistakaninja wrote:Photo at the bottom of the newsletter is Claude Akins in Comanche Station, so coupled with Nick Wrigley's tweet that confirms the Budd Boetticher box.

I am hoping for Tourneur’s Night of the Demon.

rapta wrote:
I think they said Night of the Demon won't be arriving 'til Summer, but that's another instant pre-order for me.

If they do I hope they include the hour long Doc on Tourneur that was doing the rounds on french TV last year.
https://www.youtube.com/watch?v=KmmIG14ZE4Y" onclick="window.open(this.href);return false;
Top

The Effect of Gamma Rays on Man-in-the-Moon Marigolds: 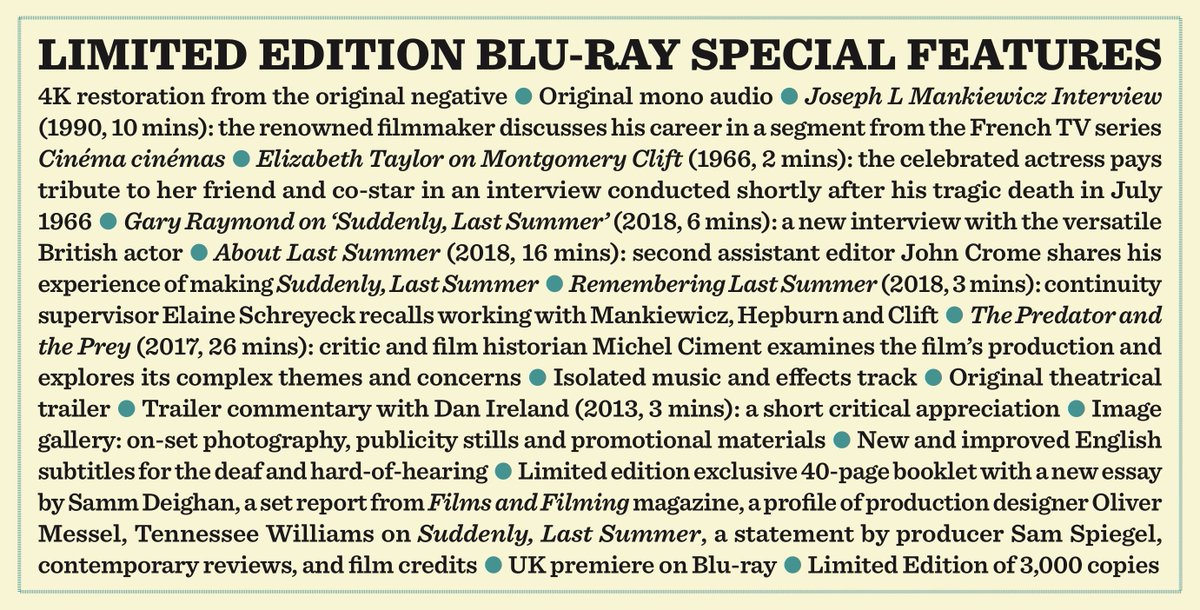 DVD Beaver has now covered all of March's releases: Gumshoe, Otley, The Passenger and Town on Trial.
Top

Isn’t it a Sony/Columbia title.

Hill has stated that Geronimo is the one title in his filmography he'd like to go back and do another cut of. A longer cut, which is kind of odd, as this is (I think) his longest film. But it's still less than two hours. I've hoped someone would take him up on this, but Criterion is probably the only boutique label that could finance such a thing, and I doubt they have any interest in Geronimo. Would pick this up from Indicator in a heartbeat though, even if it's only the theatrical cut.

Edit: Found the interview. The longer cut exists, and is only 12 minutes longer. And according to Hill "It was damn good".
Top

That’s interesting. I do wonder though, if the film is in the hands of anyone that would release alternative, or multiple cuts, of the same film.

Certainly not TT, and if Indicator release it in the UK, that surely wouldn’t be their kind of thing? With them still developing, growing, albeit doing outstanding work.

In the hands of Criterion or Arrow, who offer the kind of completist packages, definitely but I don’t see them getting these films.
Top

Full Columbia Fuller box confirmed. 7 films on four discs. The two Fuller directed titles get their own discs (for later individual release presumably) and the others are split over two discs. Four booklets included.

All of June's releases are region-free.

(And, as ever, specifically authored to be universally compatible, so no pesky European framerates.)
Top

China Syndrome is great as well. I'm in for all of these!
Top

What A Disgrace wrote:I hope they start replicating Sony's film noir boxed sets, even if The Big Heat is left out of the mix for obvious reasons.

Yes, my thoughts exactly! Public service announcement to Indicator that as far as I know I'm Richard Quine's biggest living booster, should they need any bonus material for his films...
Top

Imagine a Quine at Columbia 1954-60 box of Drive a Crooked Road / Pushover / My Sister Eileen / Solid Gold Cadillac / Bell, Book and Candle / It Happened to Jane / Strangers When We Meet.
Top

I'm not sure if the new prints struck for the MoMA Universal Restorations and Rediscoveries series automatically translate to a HD digital transfer, but I do hope someone at Indicator has been hearing my pleas for an Edward L. Cahn at Universal set.

Anyway, this is yet another fantastic line up from Indicator and I'll certainly be picking up both the Fuller set and Modern Romance. I take it that the design of the Fuller set is Nick Wrigley's work? It looks fabulous.

As someone who sorts his collection by director, it does pain me slightly when there are box sets under any other grouping but I've just decided to use a separate shelf for 'Various'. I'm certainly not going to adopt the position of a certain Alan Clarke-enthusiast on another forum who has decreed that "only real full Fuller films should be released on Blu-Ray;" I'm grateful to Indicator for choosing to not drop Power of the Press, Scandal Street etc. as I'm sure no other label is going to release them on the format.
Top

I agree that auteurism is an over-utilized shorthand for lumping a director's work together.
In my opinion being the director does not automatically indicate authorial intent. But it does
get trickier if you try to define a group of films by the cinematographer alone. For example,
you could do a box set of Sven Nykvist lensed films that might include, say...Winter Light,
Star 80, Nostalghia, Hannah and her Sisters, Agnes of God, and Chaplin. All of these films
are masterfully photographed, but somewhat broad in terms of a general theme or cinematic
approach.
Top

Correction to my last post...I should have included The Sacrifice, not
Nostalghia!

I'm way more interested in these other movies from the 30s then the two Fuller actually directed - they're the reason I'm buying. Indicator's just so perfectly in my particular niche, with so many of thse relatively forgotten and admittedly generally deservedly so studio movies being given a full treatment literally no one else would begin to concieve of, and often doing that several times a month!

How on Earth has TT not released Modern Romance?
Top

JSC wrote:I agree that auteurism is an over-utilized shorthand for lumping a director's work together.
In my opinion being the director does not automatically indicate authorial intent. But it does
get trickier if you try to define a group of films by the cinematographer alone. For example,
you could do a box set of Sven Nykvist lensed films that might include, say...Winter Light,
Star 80, The Sacrifice, Hannah and her Sisters, Agnes of God, and Chaplin. All of these films
are masterfully photographed, but somewhat broad in terms of a general theme or cinematic
approach.

But then so would a box set of, say, Breathless, Masculin Feminin, Wind from the East, First Name Carmen and Goodbye to Language. Or throwing The Sex Thief into a collection of Martin Campbell's James Bond films.

Obviously, the Alton set revolves around a certain type of cinematography carried out within a certain genre, and it's a plausible supposition that purchasers will appreciate all four films.
Top

Probably the best month of announcements so far, and I was already a huge fan of the May titles!

Definitely pre-ordering Modern Romance (which I had been requesting since they first launched!) and the Fuller set as soon as I can...might even go direct for the Fuller set (free tote!). Would definitely consider pre-ordering The China Syndrome too any other month, but I may try and grab Criterion's Mishima or Eureka's Iron Monkey for a full month of very-much-wanted HD goodness. Unfortunately I can't pre-order everything!

And now Arrow are presumably about to announce a Hong Sang-soo box set...how are we supposed to keep up with the frequency of quality from UK labels right now?!
Top
Locked
259 posts