If my spreadsheet is correct, with the release of Columbia Noir #4 all of the titles from the four DVD sets from Sony/TCM of Columbia Film Noir Classics will now have been released on Blu-ray, with the exception of The Burglar.

There seems to be barely any overlap between the Indicator sets and the Kit Parker Noir Archive sets, which is fine by me for the time being. Only 5 Against the House, The Lineup, Escape in the Fog, and 711 Ocean Drive overlap, with the first two also overlapping the Sony/TCM sets.

Some other Columbia-originated titles (rather than Columbia-distributed) not available on Blu and not in any of these sets which have potential include Dead Reckoning (1947), The Harder They Fall (1956), and Miami Exposé (1956). If Columbia-distributed titles were included in the mix, that opens lots of other possibilities for future inclusions.
Top

As The Undercover Man draws to a close and the end credits start coming up, Tony Rayns says he forgot to discuss a subject he had announced earlier in his commentary, so he launches into it. Indicator graciously provides him with nearly 5 minutes of a black screen so he can finish his interesting comments. I am trying to remember at least one other instance where a commentary provider was allowed to speak substantially beyond the length of the film and I am drawing a blank. Are there other notable examples?

Also, the commentary track and the subtitles seem to be mutually exclusive on that disc. If you turn one on, the other feature becomes unavailable. I will have to test it on another player.
Top

Adrian Martin did it for one of the Godards, maybe Vivre sa vie?
Top

Hmm, I just listened to that commentary track a few weeks ago and don't recall that happening
Top

Florinaldo wrote: ↑
Thu Jul 08, 2021 4:25 pm
Also, the commentary track and the subtitles seem to be mutually exclusive on that disc. If you turn one on, the other feature becomes unavailable. I will have to test it on another player.

It's most likely the film is mastered as a "hidden playlist" where one stream is just "The Undercover Man" normally while the other stream is the commentary with the blank five minutes being seamlessly branched. Some early Silversun-authored Eureka discs like "The Man From Laramie" and "Witness for the Prosecution" are similar where selecting the commentary won't let you switch back and forth between the main audio nor turn on subtitles (though I have no idea why they were authored like that since the video is the exact same on both).
Top

therewillbeblus wrote: ↑
Thu Jul 08, 2021 4:51 pm
Hmm, I just listened to that commentary track a few weeks ago and don't recall that happening

On whichever Australian DVD it was, it cut off. They reissued it with blank screen after the movie to cover the missing audio. My guess is no issue resulted from Criterion using it because it was timed to the PAL video so it didn’t run long on 24fps.
Top

If it was a scene-specific commentary (and Adrian's usually are), the synchronisation would have gone haywire if they'd done that.

I've occasionally had to deal with commentaries recorded for PAL releases, and sometimes even commentaries inadvertently recorded to a PAL release because the commentator wasn't aware of the difference. Provided I'm aware of this upfront - and the fact that it'll run short by approximately four minutes is the usual giveaway - it's easy enough to fix. In most cases I simply slow the commentary down to 23.976fps, pitch-correcting to compensate, although in one case the commentator hadn't really recorded anything scene-specific so was happy to send me another four minutes that I could just drop in anywhere that seemed appropriate.

In the case of Tony Rayns and The Undercover Man he simply asked us upfront if we could add five minutes of black and we were happy to oblige. I seem to recall that something similar happened with The Beast Must Die, although if a commentary only slightly overruns (up to a minute, say) and it's not obsessively shot-specific it's usually quite easy to edit it so that it fits. (Quite a few commentaries end up rambling a bit by the end just to fill space, so it's easy enough to trim those points.)
Top 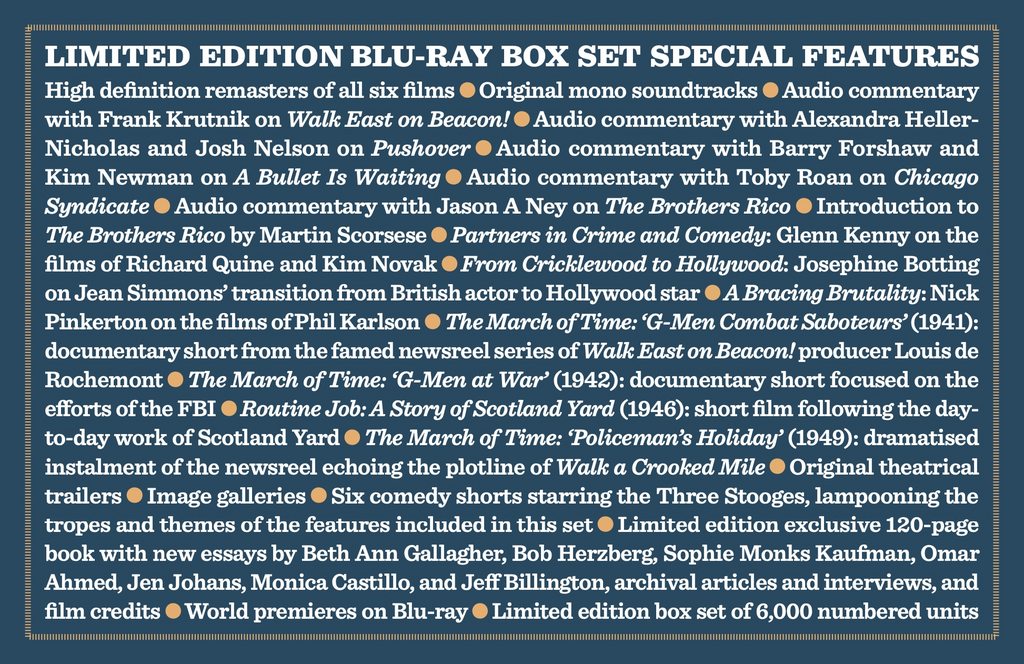 Bullet Is Waiting, A:

According to Bob Furmanek, A Bullet is Waiting should be 1.85:1, but it is 1.37:1 on the new release. I wondered at first if Sony only had a very old master but the caps just put up at Beaver show that it looks very nice and new indeed.
Top

And Tavernier might have found the French title himself.
Top

Are you sure that wasn’t Domino?
Top
Post Reply
165 posts