Filmstruck now has every Ozu except Munekata Sisters. Having seen Late Spring and Tokyo Story, I've started at the beginning and so far made it through 1933.

I liked Tokyo Chorus quite a bit more than Passing Fancy. And then there was I Was Born, But ... which stands on its own.

But wow, what a revelation Dragnet Girl was. Some uneconomical writing in the middle keeps it from being a masterpiece, but the last 23 minutes I could put on loop and watch for the rest of my life. Just as good as anything else Ozu ever made.
Top

What a coincidence, I just started an Ozu marathon on FilmStruck. I’m starting with the sound films and just made my way through A Hen in the Wind (great film, very underrated). Record of a Tenement Gentleman was also surprisingly a powerful, although brief, film as well.

From what I’ve seen so far, even at his weakest Ozu films still tend to be very rewarding film experiences. I’ve heard mixed things about his silent era though.
Top

That's great kcota, nice to see other people watching Ozu for the first time. I'm only a few films away from The Only Son and looking forward to it. Seems to have universal praise.

Definitely check out the silent films if you get the chance. From what I have seen so far: Tokyo Chorus, I Was Born But ... and Dragnet Girl are all super watchable. I like Walk Cheerfully too.

Dragnet Girl is a stylish, sometimes self-conscious gangster flick. Kinuyo Tanaka gives maybe the best performance of the Silent Ozu era, playing an impulsive borderline psycho girlfriend. She's nevertheless sympathetic at the end due to the unquestionable love she has for her man. Visually the film is stunning.

I Was Born, But ... has such authentic performances, particularly from the child actors. It would be hard to find a better film about boyhood in any country in any era. And Tokyo Chorus was everything that Passing Fancy wasn't for me. It was funny, humorous, also touching. Really what I would call the first "Ozu pic" in the same style and material as his later films.
Top

There are quite a few gems in Ozu's silent era. An Inn in Tokyo is my personal favourite (another story about children). There is also I Was Born, But..., A Story of Floating Weeds, which are top notch Ozu even before his cristallized style. I'm not a fan of his gangster flicks though but they are still very good films on their own.
As for the B&W sound films you can look forward to The Only Son, There was a father, A Hen in the wind, and of course Late Spring! But my favourite of this period (not to mention Tokyo Story) is The Flavor of Green Tea Over Rice, an absolute beauty and underexposed.
I prefer not to tell too much about the movies as it's always better to discover them fresh without advance knowledge.
Top

There's something quite thrilling and exciting knowing I have both the entire filmography of Mizoguchi and Ozu to explore, so I'm happy to read all these comments
Top

Don't forget Naruse and some others (unless you've already seen their films, of course).

Also I need to apologize for my Dragnet Girl hyperbole. It was really good especially the ending, but nothing is as close to as good as Late Spring.
Top

BenoitRouilly -- Tokyo Inn is one of my veryt favorite Ozu films (silent or not) -- and one one of my favorit silent films (Ozu or not). Have you seen What the Lady Forgot? Definitely needs to be seen in tandem with Grean Tea.

FilmSnob -- Dragnet Girl is wonderful no reason to apologize for loving it -- or need to compare it (much) to Late Spring, a very different sort of film. Dozens of superb Naruse films -- and then there's the almost always wonderful Shimizu and the even more neglected Shimazu (but good luck finding anything of his in subbed form)....
Top

Indeed I saw What Did The Lady Forget?, quite funny, but why would you pair it up with Green Tea Over Rice? Because of the quarrel between spouses?
Oddly enough, I'm not as well versed in Naruse, but the few I've seen are beautiful. The only Shimizu I saw is Arigato-san, quite an original "huis-clos" in a bus. I liked it much.

FilmSnob, it's only the genre I don't associate with the typical Ozu style, but it's a perfectly fine film on its own.
Top

A great deal of plot overlap between Lady and Green Tea -- Not just the argument between spouses, but the major niece subplots and the maritally-romantic endings. The other half (or so) of Green Tea draws on an unmade war era film (probably mostly only thematically).

There are, alas, a lot of missing silent films -- so it is a bit hard to truly define "typicality" for the Ozu silents.

There are at least 20-30 gems in the Naruse cinematic treasure chest. Too bad is almost possible to see most of these (and Shimizu is even more difficult -- as to Shimazu and early Uchida -- forget about it)....
Top

Perhaps consideration should be given to Naruse's Repast as a film to watch along with Ozu's Green Tea Over Rice and What Did the Lady Forget?

Everytime I watched What Did the Lady Forget?, I've always had a smile on my face.

It would be so nice if Criterion release on Blu-ray all of the Naruse films that they currently have on Filmstruck.
Top

artfilmfan -- All 3 of these movies put a smile on my face -- but I love Repast even more than the 2 Ozu ones.

It would be so nice to have high quality new scans of all the more-or-less available Naruse films -- but I can't believe it will ever happen.

Michael,
Let’s take an incremental approach, wishing for Criterion to release the Naruse films one dozen at a time. I’d say now we wish for those that are currently on Filmstruck. And when Criterion find out that they sell so well just like hot cakes and then they add more titles to Filmstruck, we will wish for more

We can dream
Top

A Straightforward Boy (or at least surviving pieces thereof) will be next week's featured film on Le Cinéma Club. This is among the extras on Criterion's Good Morning, but I have my fingers crossed we'll be getting the version discovered in 2016, which is apparently about five minutes longer than the fragments on the Criterion disc.
Top

The Fanciful Norwegian wrote: ↑
Fri Jul 12, 2019 12:48 pm
...I have my fingers crossed we'll be getting the version discovered in 2016, which is apparently about five minutes longer than the fragments on the Criterion disc.

Yes, apparently this will include the little bit of additional footage from Tokkan kozo.
Top

That doesn't reflect the actual amount of additional material, since the two versions turn out to have hugely different frame rates. By my count, the older print was presented at 20fps, while the new restoration is 14-15. The short version might be a smidge too fast, but the new one is frankly molasses-slow and I'd like to know how they arrived at that speed.
Top

It sounds like the new version may have only a little additional material. If only someone could find the _full_ version.

In re. the FPS of the new version, I can't think of hardly any silent-era films that were meant to be projected at such as speed. I can see that making some sense only if the restorers are confident that many individual frames—spaced at roughly even intervals t/o the film, rather than clustered together—were missing....
Top

Michael Kerpan wrote: ↑
Fri Jul 19, 2019 11:26 pm
It sounds like the new version may have only a little additional material. If only someone could find the _full_ version.

Adjusting for 20fps, the new print would still be about five and a half minutes longer than the old one... which corresponds to the amount of new footage reported when the print was discovered, as well as the 19-minute runtime that festivals have indicated for the new restoration. So it seems at some point a 20fps speed was assumed, same as the older print. I wonder if there's two versions of the restoration out there at different frame rates, though I still can't see why anyone would go with 15fps when it's clearly soooooo muuuuch slooooower than the filming speed.
Top

He also had real issues with night... (the monograph I'll never write -- Ozu After Dark...)
Top


This week we are releasing new posters for Yasujiru Ozu's ‘Tokyo Story’ by the much celebrated French illustrator Tom Haugomat. We have wanted to work with Tom for a long time and we are over the moon with our first collaboration. 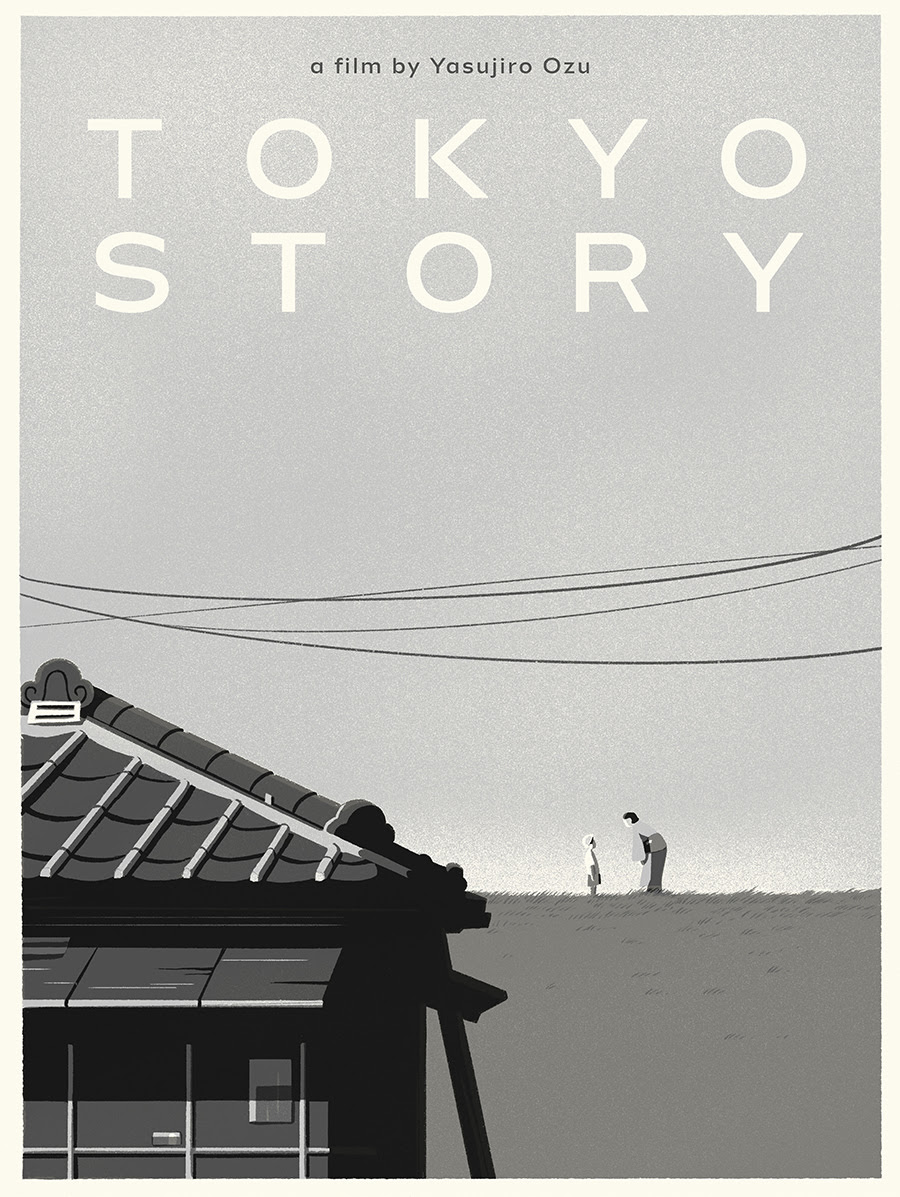 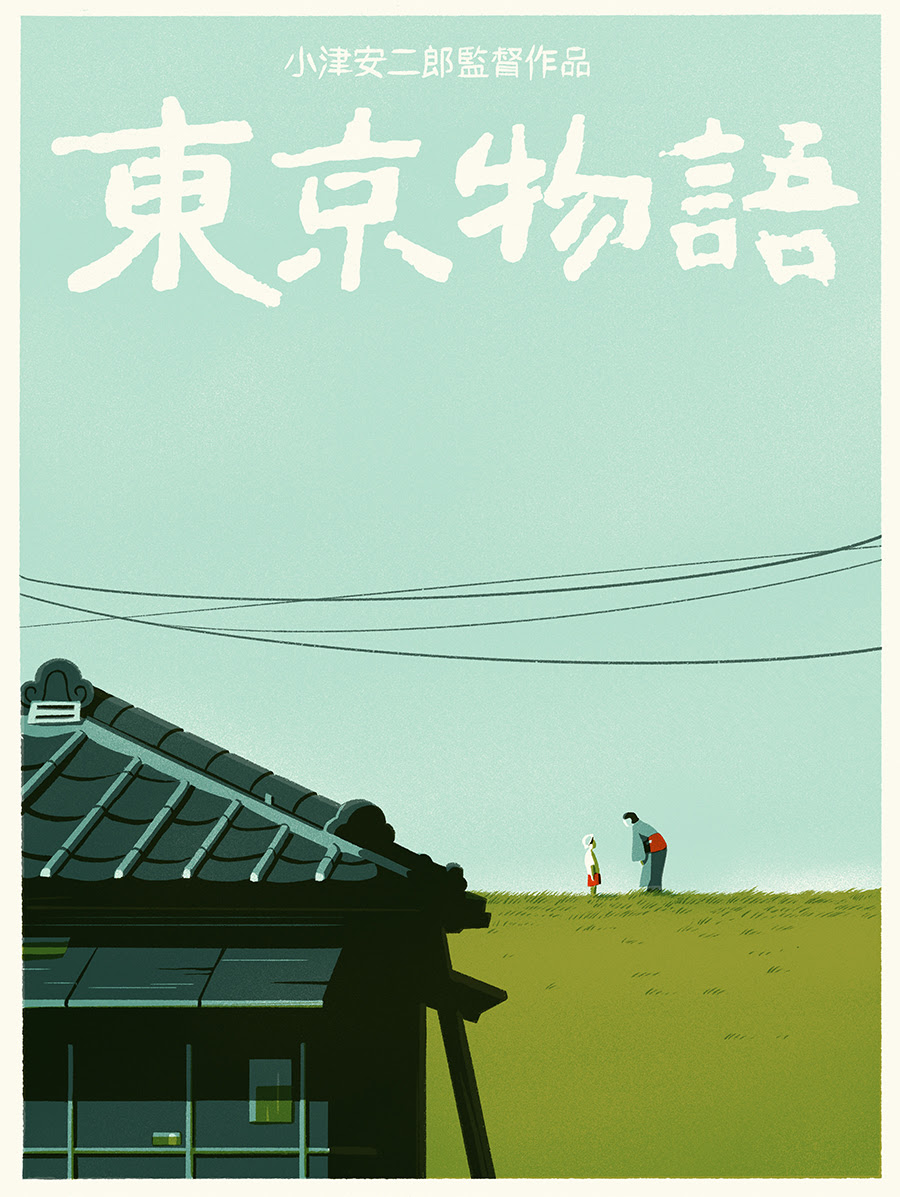 "Yasujiro Ozu's diaries have been reissued after being out of print for nearly 20 years. Yasujiro Ozu: Carnets 1933-1963 covers thirty years of the filmmaker's life through the daily journal he kept all his life. Between laconic notations, poetic inspiration, expression of his emotions and often sarcastic thoughts, the 32 notebooks reveal an ordinary being of flesh and blood of rare sensitivity and intelligence. Chronicling his day-to-day activities, often in a concise manner, sometimes by enriching it with haikus, Ozu recorded the weather, food, family, friends, the drinking evenings, baseball season, bereavements, the war, illness, the throes of writing and directing, films and the shows he sees. This volume offers a complete translation (1262 pages), revised and enlarged from the original French edition published in 1996 by Editions Alive. The preface, written at the time by filmmaker Alain Corneau, has been preserved. You can order this publication on the website of Carlotta, where you can also listen to an excerpt read by the translator Josiane Pinon-Kawataké. /.../
In a short text about these diaries on the Criterion website, Ozu expert Donald Richie notes that “in [his diary] he pays as much attention to what he eats as to the film at hand. (...) On August 31, 1934, he and fellow director Mikio Naruse enjoyed Scarface and then talked about it while having pork cutlets. A year later, he goes alone to see Frank Capra’s It Happened One Night, which he calls “a really successful comedy.”

Looks like a must-buy. I missed out on getting this the first time around...
Top
Post Reply
528 posts