Not that most Trumpistas would be thinking about such issues, but I wouldn’t exactly be giving Lynch three cheers over Duchovny’s cameo in the new series – I was kind of surprised that the tone-deafness of a cis man doing a (frankly pretty cringeworthy) caricature of a trans woman didn’t provoke more of a backlash; it was certainly one of the worst bits of the series for mine, and not helped along by the fact that Lynch (whose use of people with disabilities and from minority groups has always struck me as a little exploitative and gimmicky) seemed to have designed the entire sequence to publicly backslap himself. If there are hints of latent progressivism in Lynch’s work, I’m not sure that’s one.
Top

I'm not going to deny that Denise was originally included to add extra wackiness to Twin Peaks, but at a time when trans- and gender-fluid characters still mostly were psychopaths and murderers (Silence of the Lambs), Denise was the very rare trans-character in mainstream popular culture who was sane, sympathetic and competent. She was respected by her co-workers, was an excellent agent and she got promoted. We live at a time when the US government wants to deny trans people the right to serve in the military, so how radical was a trans character mainly defined by her professional success in the early 90s ? When Agent Cooper referred to Denise by her previous male name, she corrected him and demonstrated how trans-characters should be addressed to an audience of millions. Would David Duchovny be cast in the current climate ? Probably not, but I also saw nothing wrong in having such a groundbreaking character return rather than be swept under the carpet. Sure, there were problems with her depiction in the original series. The way Denise found out she was trans was problematic but on the whole she was afforded a humanity which was very unusual in mainstream culture in regard to trans-characters.

I also don't agree that transgender characters should exclusively be played by transgender actors, just like I'm fine with heterosexual actors playing gay characters if they a right for the role. For one thing it may not be practical when trans-characters spend considerable screen time before they've transitioned. The only way they got around that with Orange is the New Black is that Laverne Cox happens to have a twin brother who played her in flashbacks and how often does that happen ? Sometimes a cis actor may fit the character better than any of a small number of trans-actors or be a big enough name to get a project funded at all.
Top

Lynch is an intuitive, not an analytical artist. I wouldn’t expect nuanced or considered political opinions from him.

It’s also the case that artists are capable of being much better people in their art than they are in life. I once had a discussion with zedz about how Nabokov the man could be dismissive, small minded, homophobic, and sexist, and yet as an artist was broad minded, layered with pity and sympathy, and used misogyny, anti-semitism, and all other bigotries and hatreds (often subtly depicted) as deliberate clues that a given smooth-talking character is a monster whose words the reader should inspect carefully. As an artist he knew precisely the power quotient of words, and how more powerful people can use them to remake reality and co-opt and stifle other, more vulnerable people’s voices.

How to square all this? I don’t. The beauty of Nabokov’s art is that he could transcend his limitations as a person in it, be better and more perfect than he could manage in life.

So it no doubt is with Lynch. I don’t need Lynch to have all the right opinions or be perfect as a person. He just needs to keep being an astonishing artist.
Top

The shame of this is (re: Sausage) that by most accounts Lynch is a pretty exceptional person to boot, and this absolutely casts a cloud over that for as long as he doesn't respond to it (if he ever does). It's unfortunate, but of course continues to have nothing to do with his art.
Top

While the alt-right are twisting in arms that a known celebrity "praised" Trump, the Resistance-type liberals are just escalating the tension by saying they'll never watched his work, or the old trick of saying they knew something was wrong with Lynch because they found him to be a creep. One man went far as saying we shouldn't care about the opinions of a man whose famous for a tv series on a fictional rape/murder and a movie that's "incoherent psychodrama with a "hot girl-on-girl" scene in the middle," implying the art doesn't go deeper then the surface of the sum. A scumbag due to supporting Bernie Sanders in the primary. In Lynch's case he should try to rebut the clickbait critics by offering up with the criticism of Trump and co as being "petulant children who are destroying the fabrics of our country", as no one's is understanding the nuance of what he said was not a ringing endorsement of fascism in America.
Top

Or, as a character in The King of Comedy succinctly put it when her favourite celebrity was too busy to sign an autograph, “You should only get cancer! I hope you get cancer!”

Lynch’s argument seems perfectly coherent to me, and I don’t see that he has any need to defend or clarify it.
Top 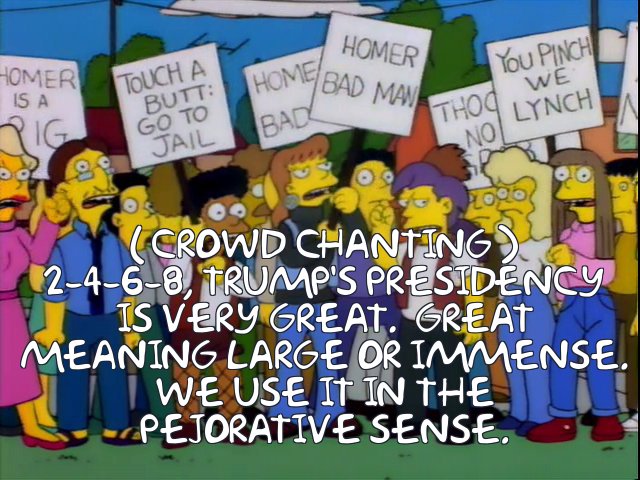 Vice to the rescue
Top

This thread has certainly taken a turn for the ridiculous.
O.K., It's disappointing when artists reveal questionable political or moral views but it doesn't diminish my liking for their work one iota.
H. P. Lovecraft was a racist, William Burroughs expressed misogynist views and Tarkovsky was sexist. Lynch and Burroughs believed all sorts of pseudoscientific nonsense.
They were also all geniuses, and some of that genius may have derived from them being a bit crazy.
Top

The last several posts in this thread have stated what is essentially exactly the same position you just did. Not sure in what way it's 'taken a turn for the ridiculous'
Top

This is David Lynch writing. I saw that you re-tweeted the Breitbart article with the heading – Director David Lynch: Trump ‘Could Go Down as One of the Greatest Presidents in History.’ I wish you and I could sit down and have a talk. This quote which has traveled around was taken a bit out of context and would need some explaining.

Unfortunately, if you continue as you have been, you will not have a chance to go down in history as a great president. This would be very sad it seems for you – and for the country. You are causing suffering and division.

It’s not too late to turn the ship around. Point our ship toward a bright future for all. You can unite the country. Your soul will sing. Under great loving leadership, no one loses – everybody wins. It’s something I hope you think about and take to heart. All you need to do is treat all the people as you would like to be treated.

Well now he just sounds like a wanker.
Top

This episode illustrates all too well why today's media is so appalling - sentences half quoted or taken out of context for blatant click bait articles. I cringed at Lynch giving Trump the benefit of the doubt when this orange-tanned monster is so incapable of reason, compassion and diplomacy and strong leadership, let alone being a real mensch. And if Lynch has learned a lesson from this, I hope it's that if you take an interviewer's bait with politically loaded questions, you're more articulate next time. Me, I wouldn't agree to any interview of any kind unless I had my own tape recorder or camera at hand to record my own copy of the interview. There are still good journalists out there but they are increasingly drops in a sea of assholes.
Top

All you need to do is treat all the people as you would like to be treated.

Have Russian prostitutes pee on our beds?

Er, this is David Lynch we’re referring to, right?

Is David Lynch making a new film with Netflix?
Top

One of David Lynch's first Q&A's has gone up online courtesy of BAMPFA: https://soundcloud.com/bampfa/archival- ... avid-lynch
Top

Lynch has directed a new short film, What Did Jack Do?, for Netflix. Available now.

EDIT: Despite its (2020) labelling, it seems like this has been doing the rounds since 2016/7 but this is the first time it has been available outside of festival screenings
Top

I didn’t like this short at all, which surprised me since I like everything else Lynch has done, up to and including his Dumbland short cartoons. So of course I thought I was immune to disliking anything of his, but this just falls flat in every way- I don’t think it’s particularly funny or curious as something bizarre, or even enjoyable to turn my brain off to. The content is often too specific to be washed away in sacrifice rob Lynch land, and I just came down thinking this was probably one of Lynch’s many vivid dreams from a transcendental meditation session and he decided to film his least exciting memory of one.
Top

On one hand I found it off putting even by Lynch standards but I also found it an amusing way to spend fifteen minutes after dinner. I'm a bit torn. I will say that it was at least never boring and it's inspired some good shitposts online and that's about it.

The only really question I have after all of it is why did it just show up on Netflix of all places after essentially disappearing for a few years?
Top

I must say I really liked it, and probably because the content is so specific, well known and easily identifiable as such (a police interrogation) but seen through Lynch's highly particular view which he makes fun of at the same time (similar to what he did with cooking shows in "Quinoa"). I guess he simply wanted to play around with his Twin Peaks cop persona again in a different setting, too. And perhaps it's just me, but I always really like to listen to his very particular voice and way of speaking, and lending his voice to both protagonists here has additional charm. Of course this is in no way an important work, not even an important minor work, but I found it really nice and entertaining, and pleasingly absurd without being scary.
Top

It is sporadically funny but way too long and the shot reverse shot bored me after a while. But it isn't completely empty, as I laughed at Lynch'es constant usage of well known and cliched idioms which he undercuts with the silliness of it all. It just really doesn't amount to much
Top
Post Reply
575 posts