Discuss DVDs and Blu-rays released by Eureka/Masters of Cinema and the films on them. If it's got a spine number, it's in here.
Forum rules
Please do not clutter up the threads for MoC titles with information on pre-orders. You can announce the availability of pre-orders in the MoC: Cheapest Prices / Best Places to Buy / Pre-Orders thread. Any posts on pre-orders in any other thread will be deleted.
Post Reply
8 posts • Page 1 of 1
Message
Author 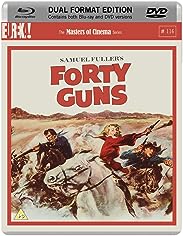 One of the very best films by the uncompromising American director Samuel Fuller ( — also: one of the very best, and most iconoclastic, Westerns ever conceived) was also a mid-career triumph for the brilliant Barbara Stanwyck. Forty Guns finds Fuller at the height of his game.

Jessica Drummond (Stanwyck, with her iconic night-nurse babyface) is avatar of the consummate Brooklynite, transplanted here to the dusty crags of the West – Cochise County, Arizona, to be precise – where as a wealthy landowner she exerts a powerful influence over town affairs and commands a league of some "forty guns" to enact her will. The appearance of interloper Griff (a character name that recurs throughout all of Fuller's body of work, embodied this time by Barry Sullivan) precipitates Jessica's domain's slide into chaos...

Originally intended by Fuller to be titled The Woman with a Whip, Forty Guns represents an apex of 20th Century Fox's filmmaking while the studio era still shone. The Masters of Cinema Series is proud to present Forty Guns on Blu-ray and DVD for the first time in the UK in a special Dual Format edition.

This is the 4th time today that I've had to cancel a large Amazon UK pre-order on account of a new release announcement.
Top

Just email customer service and ask them to add the new titles to your existing order. (That way you don't lose out on any lower prices that have come before.)
Top

I didn't know you could do that. Very interesting trick indeed not to lose the pre-order price drops. Thanks Swo !
Top

The Beaver wrote:A couple of scenes had contrast close to, but not achieving, moiring.