Discuss DVDs and Blu-rays released by Criterion and the films on them. If it's got a spine number, it's in here. Threads may contain spoilers.
Post Reply
57 posts
Message
Author

To be fair, someone needed to have done that. And I cannot because of that restraining order after the Jim Jarmusch 'incident'!
Top

Also, the Q&A has either been replaced by or remodeled into a "New introduction by Soderbergh".
Top

This wouldn't have happened if they'd asked him my questions

domino harvey to Steven Soderbergh wrote:Sex, lies, or videotape? You can't have all three

Give me some credit, I posed fuck/marry/kill for the titular words
Top

If it makes you feel any better, one of the questions they picked for Dead Man was literally Bill Hader asking "Can I be in one of your movies?"
Top

I really don't see the need to upgrade at all. Such a disappointing overall package considering nearly all of the Soderbergh-specific extras were on the preexisting Blu-ray
Top

Sure, the Soderbergh-specific extras were on the previous disc, but audio commentary aside, the older disc roughly had 20 minutes of extras while the Criterion has about 103 minutes. That's quite some more to me.
Top

What about this from the lengthy "Notes on Remastering and Restoration" at the end of the review?


One never says never with restoring films, but this time, we think it’s for real. Steven asks that you destroy all previous copies.

tenia wrote: ↑
Tue Jun 19, 2018 11:42 am
Sure, the Soderbergh-specific extras were on the previous disc, but audio commentary aside, the older disc roughly had 20 minutes of extras while the Criterion has about 103 minutes. That's quite some more to me.

tenia wrote: ↑
Tue Jun 19, 2018 11:42 am
Sure, the Soderbergh-specific extras were on the previous disc, but audio commentary aside, the older disc roughly had 20 minutes of extras while the Criterion has about 103 minutes. That's quite some more to me.

There are 29 minutes with Peter Gallagher, Andie MacDowell, and Laura San Giacomo and 20 minutes with Larry Blake and Cliff Martinez, both recorded for Criterion (and their stuff usually is pretty OK) plus 12 minutes on the restoration. I don't have the disc so can't judge their content, but that's about an hour of new extras that look interesting, on the paper at least.
If the original disc had an hour of interviews, I certainly wouldn't defend the Criterion disc so much, but I find it severe to dismiss so easily the supplements section.
Top

Shalit is apparently still alive and thanks to domino I now know that.

This release is really just great for people like myself who have never seen it for a variety of reasons. I imagine I'll be getting this around pay day.
Top

For those on the fence about this release I thought I would post the notes on the restoration here by sound editor/re-recording mixer:

Larry Blake wrote: NOTES ON THE REMASTERING AND RESTORATIONS OF sex, lies, and videotape

There are so many paths to take from original picture and sound elements to Blu-rays and DVDs, and so much misinformation in the blogosphere regarding these policies, we thought you might like an explanation of the remastering steps we undertook this year, and indeed in previous iterations, in spiffing up sex, lies, and videotape for home-video viewing.

Although the film was released in August 1989, it was not transferred to videotape until that fall. These were the days when the "theatrical window"-the time between theatrical and home-video releases-was as long as nine months, where now it's usually three months and home-video mastering is finished concurrent with the film proper.

Steven Soderbergh worked with Rich Garibaldi of Telecine Tech in Los Angeles for a few days, transferring from the 35mm interpositive (IP) that was made from the cut original camera negative, and had scene-to-scene color correction built in. The master was recorded to standard-definition D-2 composite digital videotape

Rich was using a heavily customized Rank Cintel Mklllc telecine, and as was the standard practice those days, a reel would be tweaked shot-to-shot, optimizing the image for standard-definition televisions, and then recorded in real time. While all efforts were made to keep the film as clean as possible, there was not a later step in which small imperfections were removed.

This tape was the source of all video masters (including for the 1990 Criterion laserdisc) until 1998.

For the 1998 DVD reissue, Sony made a new IP, and this was used to make the first high-definition transfer, to the Sony reel-to-reel HDD-100O format. That same IP was taken out of the vault in 2009, and was scanned to 4K DPX files, which were then to be "down-rezzed" to 2K files that would be the source of the master created for the first Blu-ray release later that year. In addition, for the first time the film benefited from dirt cleanup and splice bump corrections.

For this year's restoration, we not only transferred from the original camera negative but also maintained 4K resolution throughout the whole process. The transfer was done at Deluxe in Culver City, California, and the final timing was done by Joe Gawler at Harbor Picture Company in New York, New York. The work on the dirt cleanup, etc., was redone again, this time at 4K.

In this latest version, two small "errors" were digitally corrected: can you tell us what they are? In addition, one large omission in the end titles was fixed: Diana Strebel was finally given credit as the unit still photographer.

At the original mix in 1989, the final mix stems were recorded on a " Sony 3324 DASH digital multitrack tape. In 1998, the stems were transferred to files, and a 4.0 "discrete" printmaster was created for the initial DVD release, since the film was originally mixed only for two-track matrixed Dolby Stereo. When it came time for the 2009 remastering, everyone felt that it was important to step back further to the original 1989 premixes in order to create an updated version of the track.

The original 2" Dolby SR-encoded 24-track analog premixes and the digital multitrack stems were transferred to Broadcast Wave files at the 24-bit/96 kHz standard. In the mix for this reissue, the premixes were the primary source for the new stems that were created. Extensive dialog editing was undertaken in Pro Tools to smooth out tone variations among camera angles, and to remove multitudes of snap and pops that we were unable to deal with given our 1989 dialog editing workflow.

The music was "upmixed" to full 5.1 from the original three-track (left-center-right) premixes, although reference was made to the 1989 levels relative to dialog and sound effects. In keeping with the approach to the 1989 mix, sound effects were pretty much kept to the front, screen speakers, with minimal utilization of subwoofers or surrounds.

As happy as we were with this revision, one problem remained: there were considerable problems with generator noise during production, and we needed to go back to the original edited dialog tracks, before noise reduction and equalization had been applied during the 1989 premixing. For detailed information on the work at this stage, please see the audio restoration demonstration program in the supplements section of this release. The stems and printmaster for this version were kept at 96 kHz for release on Blu-ray. The sound restoration took place at my company, Swelltone Labs, in New Orleans.

As was the case with picture, there are only two specific, notable changes that Steven and I have made relative to the 1989 mix: can you guess what they are?

One never says never with restoring films, but this time, we think it's for real. Steven asks that you destroy all previous copies.

We welcome your comments.

You never quite realise how noisy a generator can be until you try using one for a low budget film shoot on location.

I truly wish all films released on home video came with such a detailed history of the post-production workflow. That was an interesting read; thanks Chris.
Top

I went through most of the features today, and I concur with Chris on this being a fantastic edition. The stuff about the sound mixes and restoration is fascinating and the new interviews are all really good (I especially liked Peter Gallagher's seething jab at Harvey Weinstein screwing him over for awards consideration), and the Dick Cavett interview is a great find for how delicately it tries to dance around Kafka being a massive bomb (Soderbergh goes right up to the edge of saying that he fucked it up). I will say that the excerpts from the screenplay book leave out my favorite part of that book, which is the whole page devoted to a foot-and-car chase between Soderbergh and a guy who randomly stole his address book.
Top

Great review, Chris. Made me feel good about my purchase yesterday.
Top

I love the design, as well.

Hate to be that guy, but I notice Chris said the laserdisc dint have extras, but it actually did, including a short film not carried over here:

I had the laserdisc. I saw the short, Winston, and it was pretty much like every other student film you ever seen, and probably Soderbergh who requested its omission. And honestly, the package is better off for its absence.
Top

CSM126 wrote: ↑
Wed Jul 18, 2018 4:26 pm
Hate to be that guy, but I notice Chris said the laserdisc dint have extras, but it actually did, including a short film not carried over here:

Yep, my mistake. Will correct.
Top

jazzo wrote: ↑
Wed Jul 18, 2018 6:35 pm
I had the laserdisc. I saw the short, Winston, and it was pretty much like every other student film you ever seen, and probably Soderbergh who requested its omission. And honestly, the package is better off for its absence.

I disagree wholeheartedly. Loved Winston and miss it here.
Top

Tonight I watched the 2009 Blu-Ray side-by-side with the 2018 Blu-Ray to try and find the changes noted by Larry Blake.

I found one of the image changes: 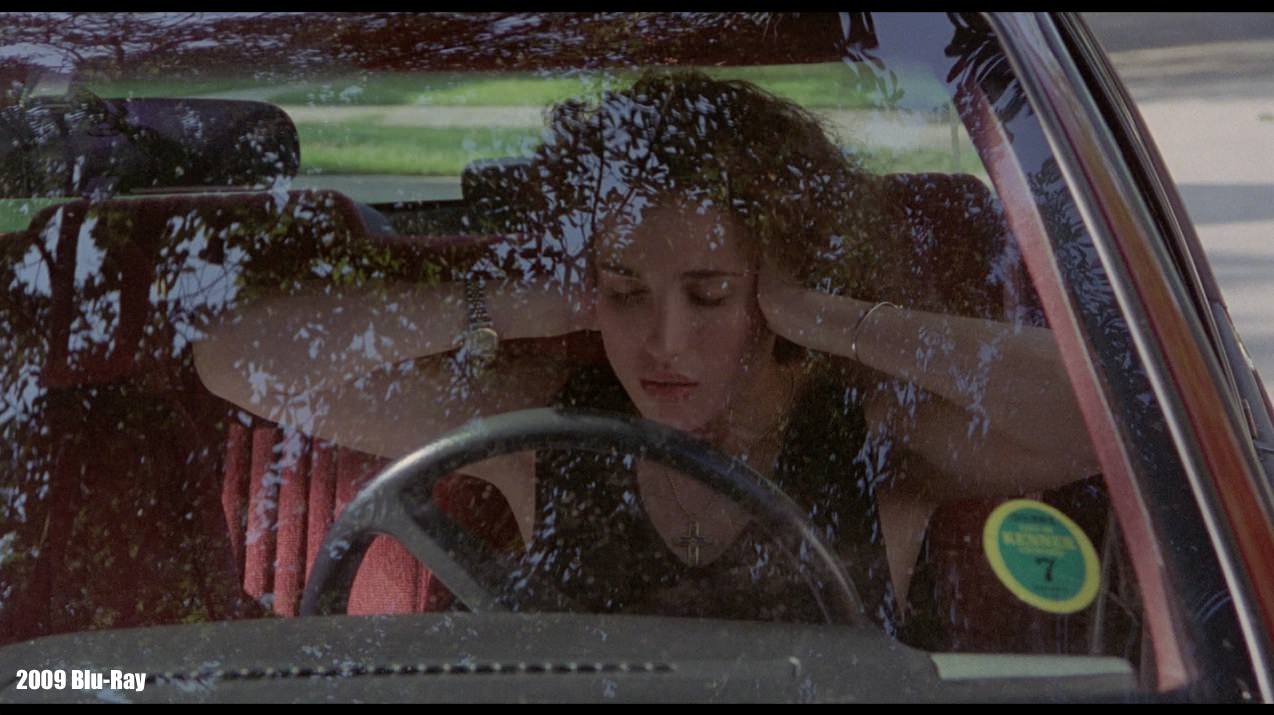 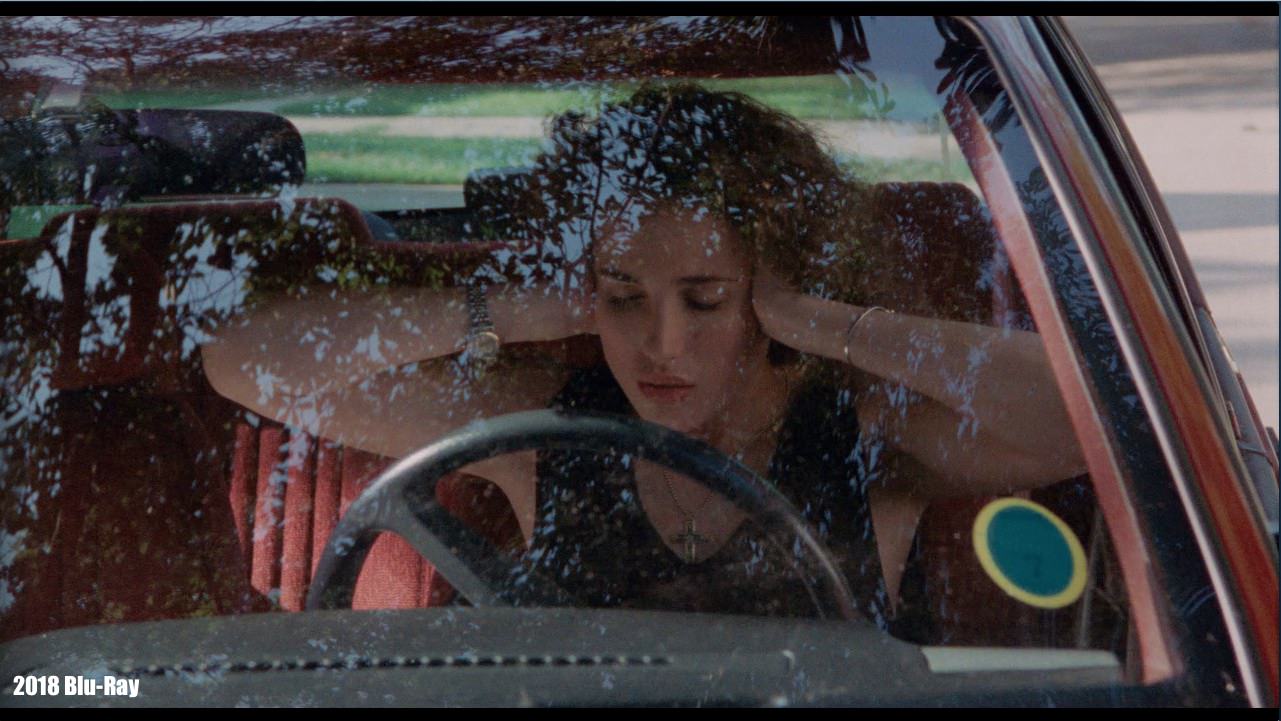 And one of the sound changes:

SpoilerShow
During his conversation with Ann near the end of the film, Graham's line "I've got a lot of problems…and they belong to me" has been changed to "I've got a lot of problems…but they belong to me" with a different line reading for the second phrase
I also found a new error that's been introduced into the film due to the new transfer exposing more image area. 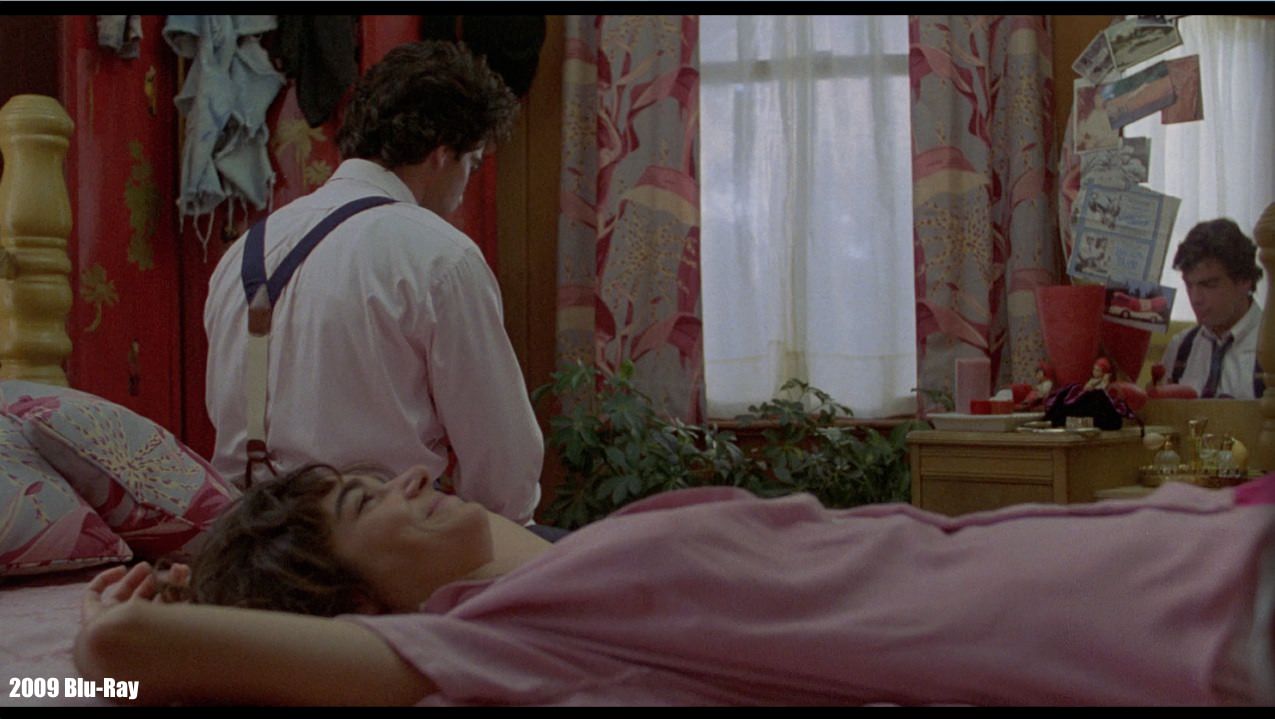 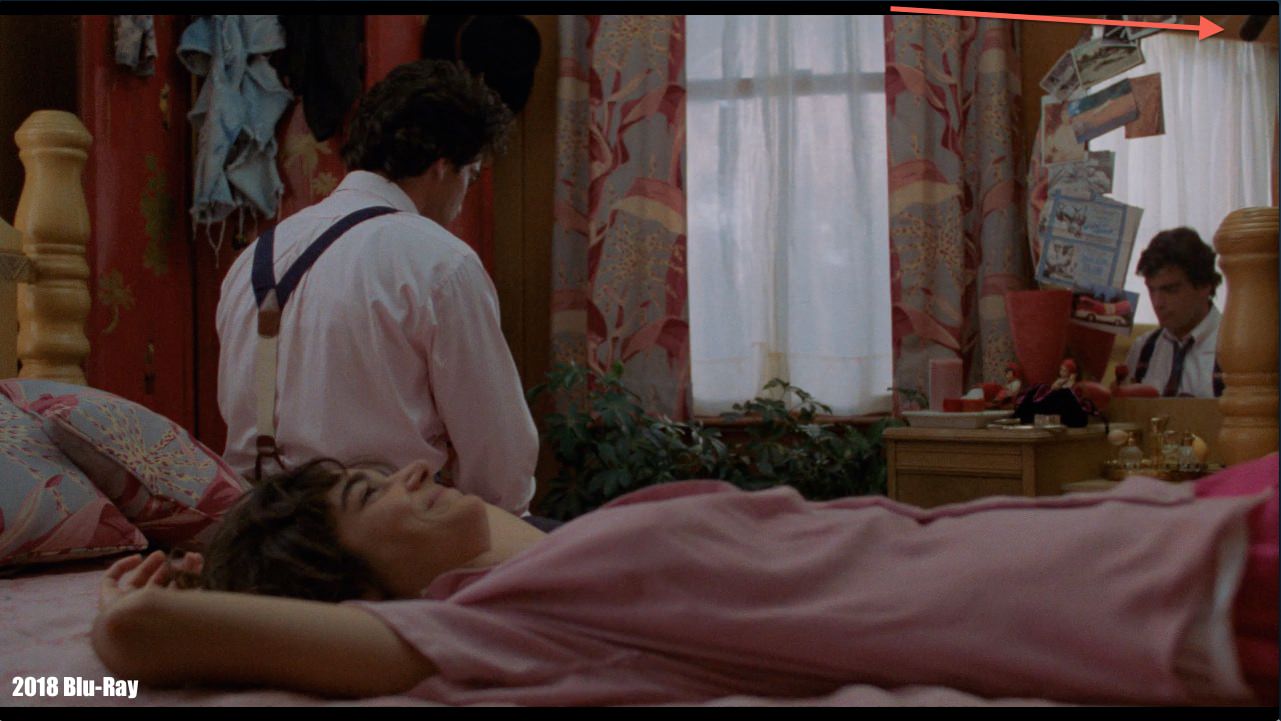 Wow, what attention to detail. I probably would have never spotted both changes without your input. I like the slightly larger screen in the current version even if it shows a boom mic. Thanks for all this info.
Top
Post Reply
57 posts