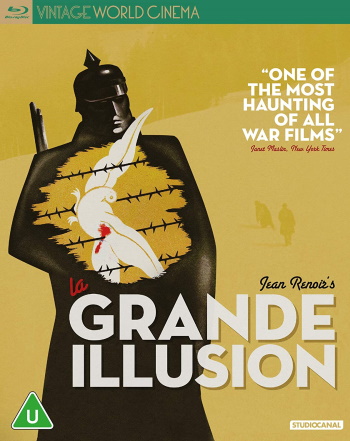 One of the most acclaimed films of all time, and a powerful anti-war statement, Jean Renoir's profoundly humanist La Grande Illusion remains as vibrant, exciting, and wise today as it was when it was released in 1937.

Set in the German prison camps of WWI, the film stars Jean Gabin as Maréchal, and Marcel Dalio as Rosenthal. Like the charming aristocrat Captain de Boeldieu (Pierre Fresnay), these two French aviators were shot down and now spend most of their time escaping from German prison camps before inevitably being recaptured. Between escapes, they do what they can to amuse themselves, but after a tunnel they've dug is discovered, the three are sent to Wintersborn, a forbidding fortress of a prison commanded by former ace pilot Von Rauffenstein (Erich Von Stroheim). Von Rauffenstein cannot help but strike up a friendship with Captain de Boeldieu, a kindred spirit from the doomed nobility.