Tracking down agent Cooper’s lineage I noticed, that Borges likens inspector Lönnrot to Poe’s detective Auguste Dupon and the first Dupon story Murders in Rue Morgue opens with wonderful quote from the esoteric 17th century polymath Sir Thomas Browne: ”What song the Sirens sang, or what name Achilles assumed when he hid himself among women, though puzzling questions, are not beyond all conjecture.”

Whether the rabbit hole goes deeper I don’t know, but on a sidenote I must say, that Browne’s quote reminds me a lot of Ezra Pound’s Canto I. I happened to read his poem The Return the same summer third season premiered and without even realizing the similar titles I immedialety felt like it was aestetically the most Lynchian thing I’ve ever read. https://harpers.org/blog/2008/01/pounds-the-return/
Top

Mondo will be rolling out 60 Greg Ruth prints inspired by the series between now and August: 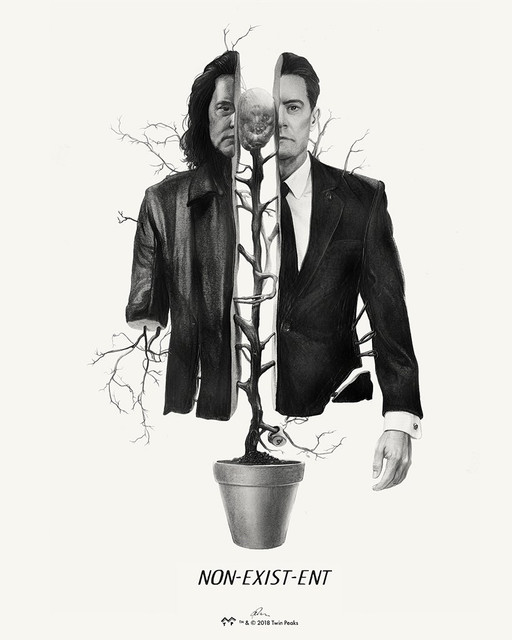 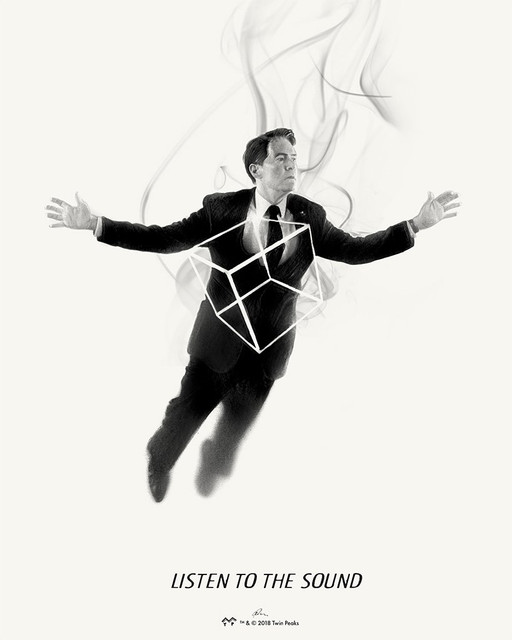 Now that’s how you milk the fans
Top

I don't know if we talked about it after the episode aired, but the moment where Alicia Witt and Caleb Landry Jones' characters are sitting at the base of a tree, after what I think is the murder of Seyfried's character, has really stuck out in my memory as of late. There's a raw element to it that feels even out of Lynch's playhouse for me because it lacks the kind of histrionics the show is known for. It's not spelled out, but you do get a feeling for what exactly is going on and is tragic to watch. I remember it really coming out of left-field for me as much as the more obvious left-field moments.
Top

It was a really interesting move on Lynch's part not to let us too far into the worlds of the young characters who are living in Twin Peaks today, including Seyfried. We get glimpses, of course, of the sorts of things going on in the town, but it would've likely been a needless step to show us too much, and you're right that the result of that is a bit of a haunting shadow left from the glimpses we do get.
Top

The only thing that bugged me about that scene was that I couldn't figure out most of what Steven was saying on the original broadcast.
I was glad to get the Blu-ray release so I could check out the subtitles.
The biggest mystery in the series is surely - why are two women absolutely besotted with such a scrawny, violent, addicted loser?
Why on earth does "everybody love Steven"?
Top

Why on earth does "everybody love Steven"?

I agree that didn't seem to be backed up by any other scenes in the season from what I can remember (I guess Lynch and Frost's implication being that Steven was awfully nice to everybody else and just rough with Becky but if you put such a line in, it'd have been more credible if we'd had seen Steven being warm towards or supportive of other citizens of the town). I'll also say that I found Jones's performance too mannered.
Top

Why on earth does "everybody love Steven"?

I agree that didn't seem to be backed up by any other scenes in the season from what I can remember (I guess Lynch and Frost's implication being that Steven was awfully nice to everybody else and just rough with Becky but if you put such a line in, it'd have been more credible if we'd had seen Steven being warm towards or supportive of other citizens of the town). I'll also say that I found Jones's performance too mannered.

The line is meant to be ironically humorous, right? Apart from Richard Horne (and, yes, Jay Aaseng's "Drunk"), Steven Burnett is the most disagreeable character in The Return; obnoxious, incompetent, and abusive throughout the scenes he's featured in. I saw the adoration he receives from Becky, Gersten, and others to be Lynch's humorously exaggerated take on co-dependency and bad choices (similar to how Shelly has seemingly dumped Bobby now that he is a respectable lawman to carry on with the reprehensible "Red").
Top

Yes, I can buy that interpretation. Wasn't it Shelley who says the line? Been a while since I've dived into The Return (I regularly watch Parts 8 and 18 though).
Top

Shelly says "You guys, my daughter is with the wrong guy," to which Jessica replies"Are you kidding? Everybody loves Steven."
I can't see any trace of irony in her delivery.
Top

This didn't seem to be a big mystery to me. Gersten and to a lesser extent Becky are nearly full-blown junkies and Steven's the one guy they can relate to. It's a very typical and nearly cliche blue-collar thing I've seen with my own eyes at times. It gets almost comical when we see Shelly throw herself on the hood of the car.

Getting back to the scene in question, what's more disturbing about it to me is we don't see the aftermath because it could quite clearly tear at Shelly and Robert the same way Laura Palmer's death did to her own parents at the beginning of the series.
Top

This didn't seem to be a big mystery to me. Gersten and to a lesser extent Becky are nearly full-blown junkies and Steven's the one guy they can relate to. It's a very typical and nearly cliche blue-collar thing I've seen with my own eyes at times.

Good point, but Jessica doesn't seem to be a junkie and she says "everybody loves Steven". And Becky is pretty annoyed when she finds that Steven has used up a lot of their coke to relieve the stress of his catastrophic job interview.
Top

So Paramount has a Twin Peaks Complete Television Collection set planned for October 15 with extras but the specs don't say what they are. And since it says "television collection", it does not appear to include Fire Walk With Me. Based on what little is known, this is a bundle of all three TV seasons.

I'm like, eh. The "Entire Mystery" set had the first two seasons as well as FWWM and substantial extras including the great Sheryl/Ray/Grace double bill of Between Two Worlds and the interview, and the Season Three Set feels definitive as it is.

I'd only buy the entire show again if it ever gets remastered in UHD and only if I take the UHD plunge (which again, I'd only consider if Criterion, Masters of Cinema, Indicator, Arrow and other boutique labels do so; the studios' offerings have no appeal to me).

I'd actually have to ask: who is this for, outside of fans who never upgraded from DVD to Blu-Ray (since the announcement says DVDs as well as Blu-Ray)?
Top

Twin Peaks is surprisingly popular with young people, which means there are always new fans discovering it, so maybe them (though conversely I think young people don’t buy a lot of physical media, so)
Top

I suppose the one thing that they could add would be the commentary tracks from the original UK DVD release of the first season. That's the reason I still have that edition on my shelf (that and the nice slipcover packaging and great menu designs!) despite going on to pick up the "Gold Box" and Blu-ray "Entire Mystery" set over subsequent years.
Top

The CBS set and the third season set are feelikg very definitive for me, I was actually surprised by how complete both felt since studios tend to leave out toks of stuff for later re-releases. I thus dont see either what they can add that would make it interesting over combining both existing sets.
Top

Even with the upcoming anniversary, there may not be an incentive other than to have a (mostly) complete version of the show widely and easily available to consumers.

As far as I know, it’s been at least two years since seasons one and two were properly available on blu-ray in the United States, so some kind of rerelease was inevitable. As to why CBS wouldn’t release the seasons individually or simply release a less lavish version of the Entire Mystery set, I won’t speculate other than to mention that multi-season or all-in-one box sets seem to be preferred options, especially for series that are complete (or as good as).
Top

Oh I too think it's just some kind of repacking.
Top

Lynch posted a very low-res photo on Twitter of the new boxset, entitled Twin Peaks: From Z to A

Likely no reason to double-dip, but I like the idea that if you want to get the entirety of Twin Peaks today, you can pick up a handsome Criterion edition of the film and a single box set for the television series. Sure it would be nice for everything to be boxed together, but that's pretty close, and makes the film stand out as more than just a long episode of a TV show that you watch between the 2nd and 3rd seasons a la that X-Files movie, for example. It's much more than that, from a quality perspective alone.
Top

The Welcome to Twin Peaks site says it's all in 4k and does include FWWM and the material from the Entire Mystery set.


This worldwide Blu-ray only release includes every ‘Episode’ and ‘Part’ of all three seasons of Twin Peaks, the Twin Peaks: Fire Walk with Me feature film and its deleted scenes called The Missing Pieces. On top of over six hours of previously unreleased bonus content, it will also include the special features from Twin Peaks: The Entire Mystery released in 2014 as well as Twin Peaks: A Limited Event Series from 2017. The set is limited to 25,000 copies worldwide and will first hit U.S. and Canada on December 10, 2019, followed by an international roll-out on yet to be announced dates.

So if I understand this correctly, this comes on top of the Complete Television set? This would explain the limited number of copies.
Top

And a little buried in that link, among the new, exclusive content in the Z to A box:

• A special 4K UHD disc with new ultra-high def transfers overseen by David Lynch of the 1990 Twin Peaks pilot, its international version, and the 2017 season’s most acclaimed episode, Part 8.

So, if I'm reading this correctly, the Z to A set will notably contain about 7 hrs of extra behind-the-3rd-season-scenes footage and a UHD with both versions of the '90 pilot and the 3x08 episode ? It's like there's always some more.
Top

• A special 4K UHD disc with new ultra-high def transfers overseen by David Lynch of the 1990 Twin Peaks pilot, its international version, and the 2017 season’s most acclaimed episode, Part 8.

Wait, so it's *not* all in 4K? Finch got me unreasonably excited.
Top

Oh, damn, this sounds worthwhile *and* expensive. I could really do without the die-cut figure of Laura and Cooper, though — all it’s doing is jacking up the eventual price.
Top

I'm surely in, but doing the pilot and s3e08 in UHD but not Fire Walk With Me seems odd.
Top
Post Reply
1288 posts