Discuss DVDs and Blu-rays released by Second Run and the films on them.
Post Reply
14 posts • Page 1 of 1
Message
Author

Stefan Uher's 1967 film is being released on DVD and Blu-ray this year, according to their website. I suspect it will be their next release.
Top

Quirky film. The film is an extended metaphor on the art of creation and its impetus requiring a muse of sorts. The virgin is played by the ‘wife’ from KNIFE IN THE WATER. I have the original English-friendly DVD from Slovakia which was released along with Uher’s THREE DAUGHTERS and THE ORGAN. The latter film would have been a more desirable upgrade since it was the only DVD that was not anamorphic and it suffered from a periodic lack of subtitles. The other two late-60s films are acceptable transfers. I hope Second Run will dip into other classic Slovak films from this period like 322 or DESERTER AND NOMADS. Even Czech classics like THE CRY and COURAGE FOR EVERYDAY would be welcome blu ray releases.
Top

The Deserter and the Nomads is presumably still owned by Sony, of all people, which paradoxically is why it’s shifted from being one of the easier Juraj Jakubisko films to see (it very occasionally popped up in London rep cinemas, which is how I managed to see it about 25 years ago) to just about the hardest.

And Second Run’s choices here are obviously going to be dictated by the availability of high-definition masters, which in the case of Czech and Slovak films are still pretty thin on the ground.
Top

FYI this is Panna zázracnica, the same movie the Slovak Cinema of the 60s series released on DVD as the Wonder Maid, which I didn't realize until I saw Blu-ray.com's placeholder image
Top

Artwork's up on The Arts Shelf. It's gorgeous, as usual. 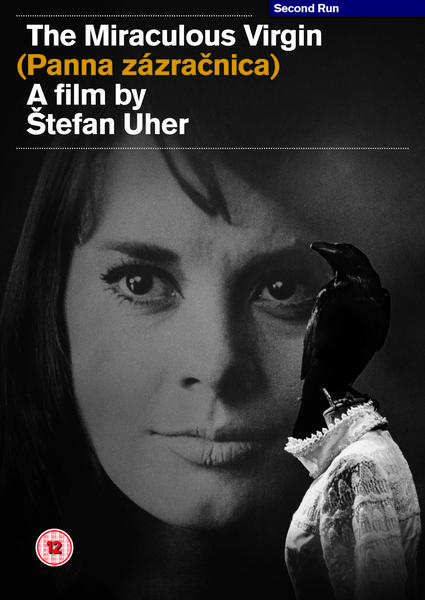 I finally watched my copy via the Slovak DVD and I predict this will be a huge hit here once the Blu-ray comes out. First off, the image quality is already gorgeous on the nearly ten year old DVD: 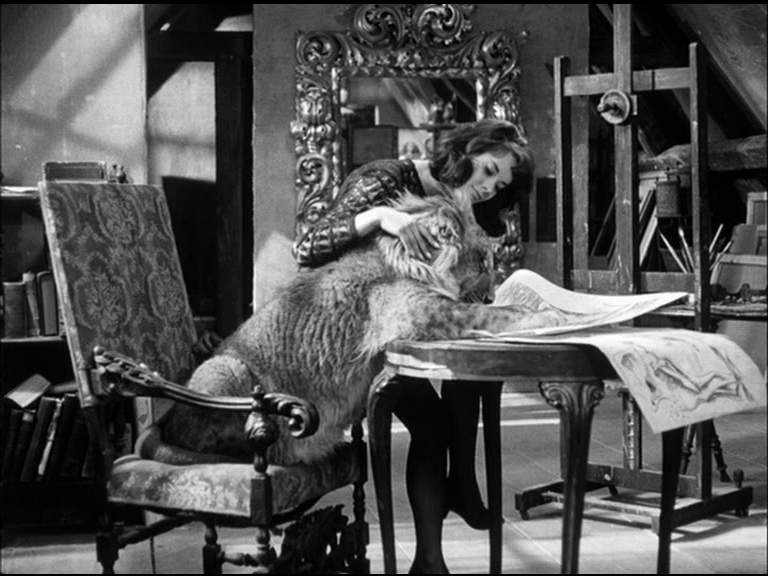 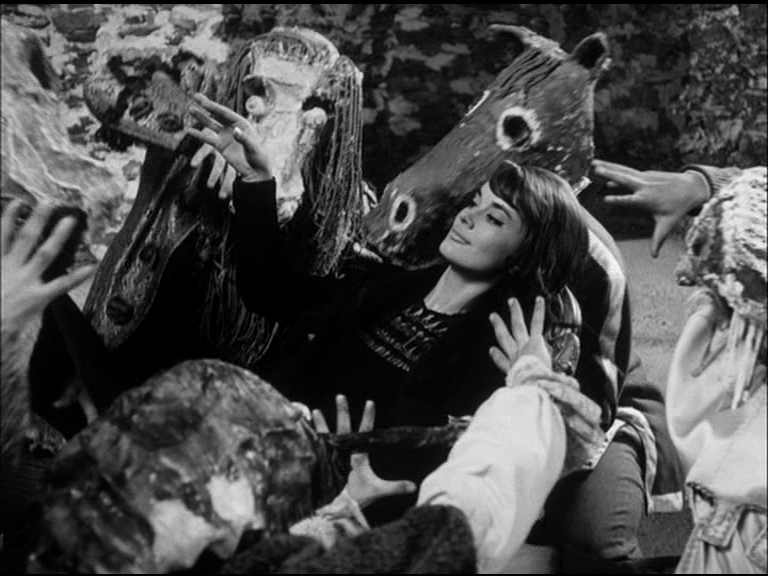 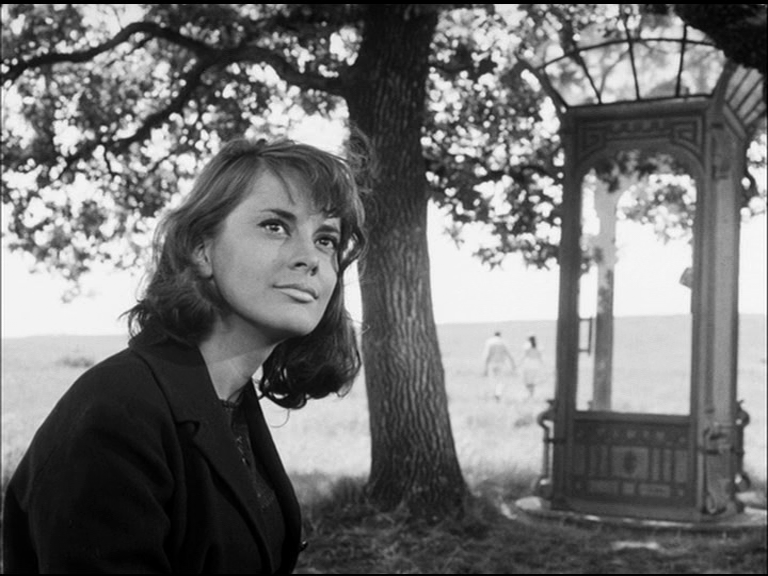 so I imagine the Blu-ray will have access to the same stellar print (or a better one?). The movie is a visual treat, blending inexplicable surrealist touches that make trying to figure out what's going on a fool's errand. I broadly understood the gist of the movie, but I'm not sure the subtitles ever really made anything clearer. The story, or what there is of it, seems secondary to providing unshakable images and sequences that defy normal explanation. I think unchecked crypticism is a crutch art house cinema leans on way too much once the sixties come and go, but I was able to give this film the rope it needs because it is executed with a confidence that told me the filmmakers understand what they're doing, even if I don't! I'm not sure a movie like this qualifies as having spoilers, but some of my favorite moments include:

SpoilerShow
A gang of artists dressed in homemade Zodiac signs sitting in a circle while the conjured muse is spun in an office chair to "choose" her sign; the subsequent visit to the home of the Pisces, a bedroom decked from top to bottom in nautical items (including a fishing net-as-room divider!); death masks delivered in giant white boxes by an 18th century courier; a lone phone booth in the middle of a country estate, anticipating Godard's more well-known usage in Week End; the unexplained transformation of one character into a real lion; and, well, the rest of the movie
I imagine no one here will be disappointed if they pick this up sight unseen, though I hope Second Run's release has some analysis or contextual extras (though I was surprised the DVD had a little writeup explaining the genesis of the film, which was apparently based on a well-known novel, which helped a little)

EDIT: I see the final specs have been announced:


Presented from a brand new 2K restoration, the legendary The Miraculous Virgin is one of Slovak's cinema's most admired and controversial works.

Adapted by The Sun in a Net director tefan Uher from the renowned 1944 novella by Dominik Tatarka, the film is an exquisite, surreal odyssey through the Slovak art scene of the 1960s. The mysterious Anabella (Knife in the Water's Jolanta Umecka) casts a spell over a group of young artists to become their muse, awakening desires and providing inspiration. Few works have embraced or expressed the notion of artistic fervour as wholeheartedly as The Miraculous Virgin.

Second Run present tefan Uher s The Miraculous Virgin on region-free Blu-ray and DVD editions which also includes Uher's breathtaking 1959 short film Marked by Darkness (Pozna ení tmou), an all- new documentary about the film and its legacy produced by the Slovak Film Institute, and a rare vintage featurette 'Looking for Anabella' - a short archival documentary on the filmmaker's search for the titular lead - plus a booklet with a new essay on the film by Michal Michalovi .

BLU-RAY SPECIAL EDITION CONTENTS
The Miraculous Virgin (Panna zázra nica, 1966) presented from a brand new 2K restoration of the film from original materials by the Slovak Film Institute.
Marked by Darkness (Pozna ení tmou, 1959) - a short film by tefan Uher.
The Story of 'The Miraculous Virgin': an all new documentary on the film, the talents behind it and its legacy, produced by the Slovak Film Institute.
Looking for Annabella: an archival documentary on the filmmaker's search for the titular lead.
Trailer
Booklet featuring new writing on the film by Michal Michalovi .
New and improved English subtitle translation.
Region free
Original soundtrack in 2.0 Dual Mono 24-bit LPCM audio

Full details of this release now up at our website
Top

THE MIRACULOUS VIRGIN is OUT TODAY!

Order from Amazon UK - Blu-ray currently just £14.63
or direct from our website.
Top

"A massive departure from his Italian Neorealist-inspired and popular The Sun in a Net and his historically situated The Organ into Cocteau-esque surrealistic cinema... Stefan Uher's The Miraculous Virgin is ripe for rediscovery on Second Run's Blu-ray special edition."
Eric Cotenas at DVD Compare
Last edited by Bikey on Sun Nov 04, 2018 11:01 am, edited 1 time in total.
Top

"The image is extremely impressive - layered contrast, bright, depth and reasonably tight with texture. I thought this dual-layered, 1080P, Blu-ray looked clean and very pleasing in-motion. [...]
MIRACULOUS VIRGIN is a wonderfully imaginative, mixed genre, surreal transcendent effort with a poetic sensibility providing an enjoyable film-experience with themes involving desire, expectation, fantasy, art and much more. On top of that the Blu-ray presentation is sweet.... Strongly recommended to fans of 60's Czech or world cinema in general. I thought it was fabulous on many levels. "
DVD Beaver on MIRACULOUS VIRGIN
Top

"A triumph of Slovak cinema... I was absolutely floored by its vivid imagination and wide range of thought-provoking contrasts. Indeed, it goes down the same path where you will encounter classic mind-benders like Last Year in Marienbad and The Bed Sitting Room, but the journey is very unique. Second Run's new release of The Miraculous Virgin is sourced from a lovely recent 2K remaster that was prepared by the Slovak Film Institute, and is Region-Free. VERY HIGHLY RECOMMENDED."
A terrific review by Dr. Svet Atanasov at Blu-ray.com
Top

"There's someting utterly beguiling about its sheer unpredictability... the whole thing has an off-the-hook quality to it that's genuinely captvating.

The Blu-ray transfer does right by the high-contrast skills of master cameraman Stanislav Szomolányi... An earlier superb Uher documentary short about a school for the blind [Marked by Darkness] adds yet more desirability to a disc maintaining Second Run's impeccable house standards."