Discuss DVDs and Blu-rays released by Criterion and the films on them. If it's got a spine number, it's in here. Threads may contain spoilers.
Post Reply
36 posts
Message
Author

An Angel at My Table 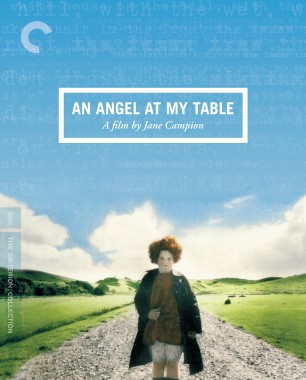 With An Angel at My Table, Academy Award–winning filmmaker Jane Campion brought to the screen the harrowing autobiography of Janet Frame, New Zealand's most distinguished author. Three actors in turn take on the lead role (including Kerry Fox in a marvelous performance as the adult Frame), as the film describes a journey from an impoverished childhood marked by tragedy to a misdiagnosis of schizophrenia resulting in electroshock therapy and a narrowly escaped lobotomy to, finally, international literary fame. Unobtrusively capturing the beauty and power of the New Zealand landscape while maintaining the film's focus on the figure at its center, Campion broke new ground for female filmmakers everywhere and earned a sweep of her country's film awards, along with the Special Jury Prize at the Venice Film Festival.

• New high-definition digital transfer, supervised by director of photography Stuart Dryburgh and approved by director Jane Campion with 5.1 surround DTS-HD Master Audio soundtrack on the Blu-ray
• Audio commentary featuring Campion, Dryburgh, and actor Kerry Fox
• Short documentary from 2002 about the making of the film
• Six deleted scenes
• Audio interview with author Janet Frame from 1983
• Trailer
• Stills gallery
• PLUS: An essay by film critic Amy Taubin and excerpts from Frame’s autobiography, on which Campion based her film

At last, a drop in the bucket to redress Criterion's gender imbalance.

This great trilogy was sort of trampled in the rush to acclaim The Piano, but I find it easily superior (though my favourite Campion film is probably still her wonderful 1984 short A Girl's Own Story - her first feature Two Friends is superb as well).

Unless this is a double-disc, the length (whether it's the theatrical or TV version) won't leave a lot of room for extras, but it would be nice to see some documentary material on Janet Frame, and terrific to squeeze in some of Campion's shorts (though they're more in line with the tone and look of Sweetie). They'd make for one hell of a bonus disc. . .
Top

Is there anything preventing Criterion from releasing both versions? I suspect that the combination of both versions, plus a disc of extra features, may be the reason Criterion has yet to decide on a price.

Speaking of which, how long is the miniseries version?
Top

While I'm all for the inclusion of more female directors in the collection, and grasp that this is part of the New Line deal, but Jane Campion? Ugh. It's been so long I can't remember if I've seen this and Sweetie or both or just the latter. I do know I saw some shorts which I was even less impressed by, and not only because I don't think I've ever seen so much boom in a shot. And this was in the midst of a love affair w/ many things NZ.

So, can anyone explain how wrongheaded I am for being excited about the re-release of Mary Harron's American Psycho, but find Campion trite, bland, and obviously manipulative?*


*Sorry I can't elaborate on these feelings further, 10+ years of disinterest hasn't exactly burned her work into my mind.
Top

Well, it's nice to see some Kiwi directors in the collection. What next - some of Peter Jackon's early slasher flicks?
Top

I for one am grateful the bitch is in the collection. I already have the French collection of her films, plus the German two disc of Das Piano. I think she's terrific, but apparently one can't feel that and be a criterion enthusiast at the same time.
Top

Wow, way to be a martyr.

By pointing out my appreciation of Mary Harron's movie, which isn't to my knowledge worshipped as high film art, I was hardly positioning myself as an overlord of "good taste," rather I was hoping for some thoughtful comments on what makes people give a shit about "the bitch."
Top

Unless this is a double-disc, the length (whether it's the theatrical or TV version) won't leave a lot of room for extras, but it would be nice to see some documentary material on Janet Frame, and terrific to squeeze in some of Campion's shorts (though they're more in line with the tone and look of Sweetie). They'd make for one hell of a bonus disc. . .

According to the scan of upcoming titles the price will be $39.95 - a two-disc set looks likely. I'd suspect the complete television mini-series (possibly the first time seen in the US?) with a cast/director commentary (?), original background material on Janet Frame etc. I agree the shorts are more in line with Sweetie, which also deserves a spot in the CC, but would love to see at least a couple (Passionless Moments so perfect I decided to never bother with the medium).


So, can anyone explain how wrongheaded I am for being excited about the re-release of Mary Harron's American Psycho, but find Campion trite, bland, and obviously manipulative?*

Each to their own, but Campion, right from the start of her work in film, has always had her own eye and visual language, a very rare gift. I've only needed to see The Piano once, so strong the images and soundscape plays in the mind. Her constant exploration of passion, sex, family and female identity may not play cool (the critical hostility to In the Cut an eye-opener), but long may she create her worlds.
Top

I'm actually more excited about American Psycho. It's good to see a woman direct in this genre. I've only seen the Piano and it was a long time ago.
Top

An article about Janet Frame, and this is a link to an obituary after her death in January 2004.
Top

This has been downgraded to a single disc. Is this old news or I just noticed?
Top

It was always a single disc release.
Top

I thought it was a double discer - until now...
And if it never was, then why the high list price?
Top

Criterion obviously realised they were losing money, hence the price hike once again. It was nice while it lasted for all four releases.
Top

Narshty wrote:Criterion obviously realised they were losing money, hence the price hike once again. It was nice while it lasted for all four releases.

Isn't anyone used to Criterion's pricing system by now? Films like this- foreign and lesser known in the States, that is- are always more expensive. Criterion do need to turn a profit you know. Besides, if the price is a huge issue you can get it cheaper by pre-ordering. My copy only set me back twenty-eight bucks.
Top

I guess I was mistaken. I looked again, and I noticed that those films I referred to had commentaries...which is, I guess, the price-raiser.

Very few, I admit. Still, no features on them, and high prices. What's the reason?

Anyway, chalk it up to stupidity on my part. I'll look a little harder next time. Maybe I'm just paying too much for some of these at some store that jacks up the price...
Top

When those films you've listed were released, there was a different market. DVD was new and there wasn't as many expectations for studios releasing titles with many features as they do today. If you ask me why they haven't knocked down the price, it's probably because they are selling at the given price and they don't see no reason to adjust it from a business perspective.
Top

These titles also hit the Christmas market on pre-order discounts... Although premium prices would not deter discerning gift buyers. Autumn has a very strong and varied lineup.. KAGEMUSHA appears to have done exceptionally well earlier in the year so RAN should perform similarly, and the other titles such as ANGEL AT MY TABLE, UGETSU & TALES OF HOFFMANN are all mouth watering...
Top

Maybe this discussion should be moved to the Image buys HVE thread. Criterion prices have gone up about a buck recently from the one stop from which I order for work and it's feasible to believe that as Criterion's exclusive distributor they have some input into their pricing strategy.

Well AN ANGEL AT MY TABLE is shipping at last (from Amazon)! One week delay from official release date...
Top

great news.
now i can expect mine to ship from Amazon.ca in the coming week, then.
it's status changed from "Usually ships within 2 to 3 days" to "1 to 2 weeks".
Top

We had several copies for sale today at the Best Buy I work at in Austin.
Top

PfR73 wrote:We had several copies for sale today at the Best Buy I work at in Austin.

A little off topic I know, but I never realized how good the prices on Criterions were at Best Buy. I got Naked and Man who Fell to Earth this morning there and I was impressed.
Top
Post Reply
36 posts