97 Do the Right Thing

Discuss DVDs and Blu-rays released by Criterion and the films on them. If it's got a spine number, it's in here. Threads may contain spoilers.
Post Reply
183 posts
Message
Author

97 Do the Right Thing

Do the Right Thing 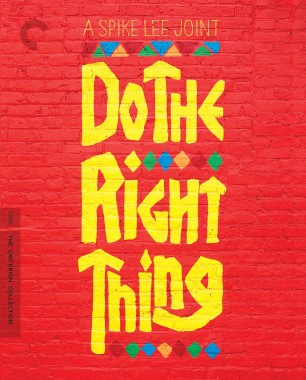 Set on one block of Brooklyn's Bed-Stuy Do or Die neighborhood, at the height of summer, this 1989 masterpiece by Spike Lee confirmed him as a writer and filmmaker of peerless vision and passionate social engagement. Over the course of a single day, the easygoing interactions of a cast of unforgettable characters—Da Mayor, Mother Sister, Mister Señor Love Daddy, Tina, Sweet Dick Willie, Buggin Out, Radio Raheem, Sal, Pino, Vito, and Lee's Mookie among them—give way to heated confrontations as tensions rise along racial fault lines, ultimately exploding into violence. Punctuated by the anthemic refrain of Public Enemy's "Fight the Power," Do the Right Thing is a landmark in American cinema, as politically and emotionally charged and as relevant now as when it first hit the big screen.

I just finished viewing this again. I am showing it to a college orientation class to cover the topic of racism and we are having a forum discussion.

The movie provides a seemingly great openness of plot. You would be hard pressed to place the blame on any one character. Lee balances racism and bigotry with love and empathy in some of the same characters and certainly in the same races overall in a very delicate balance. Meanwhile, they make for very interesting characters, very 3 dimensional.
Top

Just read this on the Digital Bits.


Also coming from the studio (Universal) on 3/7 is The Spike Lee Joint Collection (SRP $26.98), which will include Clockers, Crooklyn, Do the Right Thing, Jungle Fever and Mo' Better Blues, all in anamorphic widescreen video.

I'm assuming that it won't be Criterion's version of Do The Right Thing if the entire collection is that cheap.
Top

The Spike Lee Collection are going to be barebones discs,
as with Universal loving those dvd-18's,
it will be 5 films on 3 discs, 2 flippers and 1 dvd-9.

There's no reason to give up the Criterion disc for that.
Top

How I Made It: Spike Lee on 'Do the Right Thing'
Top

Universal is releasing this on Blu-ray on June 30, day-and-date with a new 20th anniversary edition DVD. It appears to have most of the Criterion extras plus more:


Blu-ray.com wrote:Universal Studios Home Entertainment has announced that they will bring the Spike Lee film 'Do the Right Thing: 20th Anniversary Edition' to Blu-ray on June 30th, day-and-date with the DVD re-release. The film will be presented on a BD-50 featuring 1.85:1 1080p VC-1 video accompanied by a 5.1 DTS-HD Master Audio soundtrack.

Extras for this release include:

* BD-LIVE: Access the BD-Live Center through your Internet-connected player to get even more content, watch the latest trailers, and more!
* Do The Right Thing: 20 Years Later: New retrospective documentary with the cast and crew
* Deleted & Extended Scenes: 11 newly discovered scenes cut from the final version of the film
* 20th Anniversary Edition Feature Commentary by Director Spike Lee
* Feature Commentary by Director Spike Lee, Cinematographer Ernest Dickerson, Production Designer Wynn Thomas, and Actor Joie Lee
* Behind the Scenes: Spike Lee's personal video footage from the set of the film
* Making Do the Right Thing: In-depth documentary on the making of the film
* Cannes 1989 – Follow the film's triumphant screening at the prestigious Cannes Film as Do the Right Thing energizes and astonishes audiences with its bold message.
* Editor Barry Brown: Interview with the editor of Do the Right Thing
* The Riot Sequence: Storyboard gallery of the climatic riot sequence
* Trailers: Original theatrical trailer and TV spots

So hang on to your Criterion edition if you really value "Spike Lee and line producer John Kilik revisit the film's Bed-Stuy locations."
Top

Very good news. I wonder if Criterion raided Universal's vaults in exchange for the extras.
Top

Matt wrote:Universal is releasing this on Blu-ray on June 30, day-and-date with a new 20th anniversary edition DVD. It appears to have most of the Criterion extras plus more ...

So hang on to your Criterion edition if you really value "Spike Lee and line producer John Kilik revisit the film's Bed-Stuy locations."

Well, I plan on hanging onto my Criterion regardless (even though I've upgraded to Blu-Ray, I still keep the standard DVDs for the sake of portability; if not to hang onto any passed-over extras), but I do plan on getting the Blu-Ray. This is one of my favorite movies of all time.

I was thinking about that as well. We know that they got the rights to at least 5 MGM films (including Salo) in exchange for just a commentary from the Raging Bull laserdisc; imagine what they could get with all of these...
Top

An oral history of the film.
Top

This is excellent, and I especially loved how most of the actors refute Lee's oft-repeated line about how only white people question Mookie's motivation
Top

Lee: It disturbed me how some critics would talk about the loss of property -- which is really saying white-owned property -- but not the loss of life. "Do the Right Thing" was a litmus test. If in a review, a critic discussed how Sal's Famous was burned down but didn't mention anything about Radio Raheem getting killed, it seemed obvious that he or she valued white-owned property more than the life of this young black hoodlum. To me, loss of life outweighs loss of property.

To a certain degree I take his point, but I suspect that this is partly due to the structure of the film. The incidents build up through the day, each incident more serious as the day goes on - the pattern continues into the violence at the film's end, with Radio Raheem's death FOLLOWED by the burning down of the Pizzeria. The structural logic of the film implies that it is this that is the climax of the film - the highpoint of the riot. To recognise that this is not the case means having to realise that the film is not structured conventionally in this regard.

There is also the issue that Mookie's actions are more ambiguous and thus more interesting to discuss...
Top

Wow, the difference in colour is actually fairly shocking. I always assumed that the red tinge was intentional, giving the feeling of a really hot day.
Top

What the hell, they seriously adjusted to remove the heat-replicating tint?
Top

Anyone know if Spike's ever commented on the coloring?
Top

I seriously can't imagine watching this film with it looking like that. Look at the picture of Bill Nunn-- it might as well have been captured from any of those straight to HBO movies he found himself shackled to in the 90s.
Top

I agree. I always loved the tint the film had. The Blu-ray looks rather lifeless.
Top

Ditto. The color was almost definitely intentional. I appreciate the additional sharpness and extras, but that is a huge leap in the wrong direction color-wise.
Top

I don't usually play the "I saw it when" card, but that's definitely not the film I saw one hot summer's day in 1989. I think the ashen Ossie and "LOVE-HATE" captures are the biggest giveaways. The different colours on the building frontages were very prominent in 35mm.
Top

cdnchris wrote:Wow, the difference in colour is actually fairly shocking. I always assumed that the red tinge was intentional, giving the feeling of a really hot day.

My thoughts exactly. The Criterion transfer was approved by the film's DP, Ernest Dickerson, as even the Beav notes in his comparison. Until I see evidence that the new Universal Blu-ray is what Dickerson actually prefers, I'm sticking with the Criterion DVD. The difference is too radical to be ignored, even on the grounds that the Universal Blu-ray has better "skin tones."

Also, notice that in the shot of John Turturro, there are BLUE highlights on his face in the Blu-ray grab. The highlights are more natural in the DVD.
Top

I can't think of a worse adjustment. Even the regrettable Melville de-bluing was more aesthetic than the functional purpose the ruddy yellow tint serves in Do the Right Thing
Top

Yep-- I saw this in NY when it came out, and it certainly has been messed with in telecine.
Top

Those colors are guh-ross. Not double dipping on this one. Uh-uh.
Top
Post Reply
183 posts