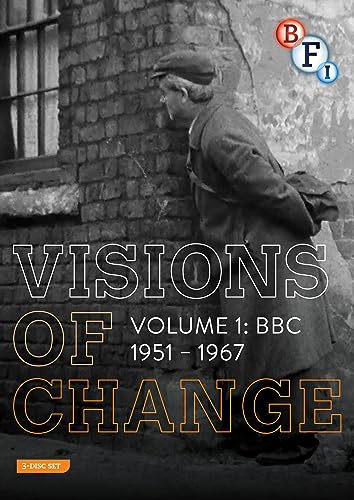 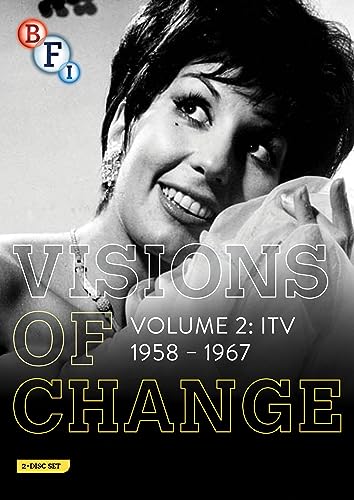 VISIONS OF CHANGE VOLUME ONE: THE BBC (3-disc DVD set)

This three-disc collection brings together a carefully curated selection of rarely-seen BBC TV productions by the leading documentary filmmakers of their day to create an essential survey of early British TV documentaries.

Collecting together nearly 10 hours worth of material, this long-overdue collection brings together works by such influential directors as Philip Donnellan, Ken Russell and Dennis Potter, and provides a fascinating insight into the cultural and social historical landscape of two of the most formative decades in post-war Britain.

This indispensable two disc collection contains over 6 hours worth of programmes made during the 1950s and 60s for the independent TV channels by leading documentary filmmakers of their day.

Bringing together work by award winning directors such as Peter Morley (director of the shocking Fan Fever), Philip Donnelly (whose motto was giving a voice to the people) and Michael Grigsby (whose career spanned six decades in which he explored a great many subjects in a uniquely humane way), this collection provides access to an era of great change in Britain.

Wow! A worthy and exciting addition to the BFI's previous big documentary sets (Free Cinema, the GPO sets, Land of Promise, Shadows of Progress - all of which should be the cornerstone of any serious collection of British film).
Top

And also It's great to finally get some Denis Mitchell in prisitine nick.
Top

This is a major release - and, if I remember rightly, it was already in its early stages when I left the BFI, so it's been gestating for over four years.

Which suggests that curatorial standards will be as high as ever.
Top

NABOB OF NOWHERE wrote:And also It's great to finally get some Denis Mitchell in prisitine nick.

I agree, I can't find his early work anywhere!
Top

And the Colony too! This looks a terrific set.
Top

I think if you had to pick a single Ken Russell from that period, Pop Goes the Easel is probably as good as anything. Especially since it wasn't included on the Ken Russell at the BBC compilation and I believe this is its DVD premiere.
Top


Visions of Change
The Evolution of the British TV Documentary
Volume 1: BBC 1951-1967

After the Land of Promise and Shadows of Progress DVD box sets, the BFI continues its re-evaluation of the British documentary tradition with Visions of Change, an extensive collection of television films made during the 1950s and 1960s, released on 14 December 2015.

Produced by the BBC, these now rarely-seen documentaries reveal how the medium of television allowed filmmakers to approach their subjects in new and exciting ways, creating work which was deeply personal, socially engaged and formally innovative.

Covering a range of topics, and including films by such influential directors as Denis Mitchell, Philip Donnellan, Ken Russell, Dennis Potter and John Schlesinger, Visions of Change provides a fascinating insight into the socio-cultural landscape of two of the most formative decades in the history of post-war Britain.

The programme makers were inspired by the changing face of city streets to capture portraits of life in Britain in different ways, while arts and sciences provided the subject matter for an explosion of factual series in a time of social, cultural and technological upheaval. These programmes were watched by millions of people and made household names of their filmmakers and presenters.

Just seen the 2nd volume has been pushed back to March 2016.
Top

Do we know the fate of volume 2? We are fast approaching March 2017 and still no release date confirmed.
Top

Michael Grigsby made a whole host of interesting looking documentaries for ITV. I wish someone compiled these together and released them. There must be a number of documentary filmmakers whose work for television is never seen anymore - a huge shame.
Top
Post Reply
11 posts • Page 1 of 1