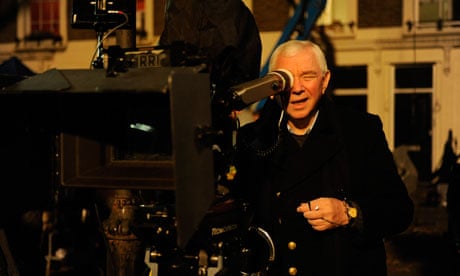 He has two new films out: Sunset Song, set in Scotland from the book of the same name by Lewis Grassic Gibbon and A Quiet Passion, about American poet Emily Dickinson, portrayed by Cynthia Nixon. He seems to have decided to be prolific at the age of 71. Just watched Sunset Song and Long Day Closes and both are glorious. Considered by many as the greatest living British filmmaker. Any fans?
Top

I'm going to see Sunset Song next Friday with Mr Davies being their for a Q and A. So, yeah I'm a fan. Distant Voices, Still Lives is my favorite and am hoping this somehow makes it into the Collection. Dustin, what are your thoughts about Sunset Song?
Top

Absolutely a fan. They actually had a retrospective of his complete (albeit modestly sized) work in 2012, which included the U.S. premiere for The Deep Blue Sea, and Davies was there - I think I posted about it elsewhere in this forum. (To be fair, The Long Day Closes wasn't screened at BAM, but only because Film Forum was running a new print at the very same time - this was right before Criterion released it for the first time on a U.S. DVD and BD.)

Sorely underappreciated in the U.S., that may be changing given the slight uptick in his output and the growing availability of his work - for a while in the not-so-distant past, pretty much all of it was unavailable for home viewing in the U.S. Even Distant Voices, Still Lives has yet to see a DVD release in the U.S., but at least Amazon now offers it through VOD. That was my introduction to his work, thanks to Jonathan Rosenbaum's glowing review.

If you look through the Guardian's press coverage on his work during the past 15 years, it's a bit sad how he's underappreciated even within his own country. The critics love him (Distant Voices, Still Lives won a deserved place in Sight & Sound's 2002 poll for the top ten films of the last 25 years, the only British film to place), but one interview has Davies lamenting how the BBC's drama department still demanded a reference for him when he sent them a proposal. ("Well I've been making films for 30 years, isn't that a good enough reference?") Then there was the 2006 London Film Festival screening of a restored print of Distant Voices, Still Lives ("the 1988 film by Terence Davies that has some claim to being the most significant British film of the last 30 years") which apparently wasn't well attended.
Top

My thoughts on Sunset Song:

Impeccably crafted, shot in glorious 70mm, Sunset Song is a stunning achievement. We've seen sweeping crane shot through swaying wheat field before on screen in Malick films and countless imitators, but not like this. There is certain authenticity in images of Davies films that communicates beyond mere lyricism and beauty. It's in the pacing - Davies is not interested in the prolonged nature porn. The compositions are perfect and they lasts no more than 30 seconds before they fade into the next shot. The nature is worshiped but in a different way than American Westerns. Constantly raining and wind-swept, the Scottish countryside doesn't have that mythic, ethereal quality, but it's more lived-in, its edges dulled by years of cultivation and presence of livestock. It's in the casting too - Deyn, a British model whose face and tall stature truly belong to the era. Always in the center of the screen, erect and defiant, seeing our heroine in the autumn field evokes a lot of different emotions. Equally painterly are the interior scenes - shot on digital to compensate for faster lenses, Davies and his DP Michael McDonough favor naturally dark settings with warmth coming from fireplace and sunlight coming through the window.

Just like many of his films, Sunset Song is a tragedy of a woman caught in the changing times. Considered as the best and most revered Scottish novel, Sunset Song is a lament on time passing, the loss of the way of life and its inhabitant's attachment to the land. This is one of the films I wish to have a better ear for the Scottish language.

Just had a chance to interview him today. Ooof, he is way out of my league. I wish I knew Emily Dickenson poems. But he's gentle and very friendly.
Last edited by dustin on Tue May 10, 2016 6:26 am, edited 1 time in total.
Top

From The Guardian...At a New York retrospective of his work, the storied British director spoke of his love of the American Songbook and how good he is at ‘death and misery’
Top