Does anyone have insights as to whether Criterion has plans to change the flimsy packaging of its Blu-ray releases? I am excited about forthcoming titles (particularly "Wages of Fear" and "Ran"), but I find the packaging more than a little off-putting. I e-mailed this feedback to CC several weeks ago but never received a reply. Thanks.
Top

No doubt they will stick with it. Given that even their new titles that on DVD come in keep cases are being cardboarded, seems like that's their plan. "Premium" packaging for their premium product. Since they've all been single disk (right?), they all could have easily been put in keep cases too, and probably would sell better too.

Why is it Criterion's premium packaging always ends up being flimsy-ass cardboard? No need to answer.
Top

Add me to to the list of people who have sent Mulvaney an email complaining about the BD packaging.

My email to Mulvaney:

I know I am not the first person to write of this, but I must offer my 3 cents.

As much as I love the presentation of the first few Criterion Blu-Ray discs, I just cringe every time I look at or handle the packaging.

I proudly display all of my Criterions (every disc released so far, in fact) in my TV room and have always been a sucker for the care and skill that goes into the packaging of many of the finer discs.

I find it so hard to resolve the disparity of the Blu-Ray discs having such a great disc presentation and such a sub-par packaging presentation.

There is no other way to put it other than to blunty say they are Cheap! Cheap looking, Cheap feeling. Just cheap.

I know it was a big deal for Criterion to offer the BD for the same price as the DVD, but if it was at the expense of quality, Criterion-worthy packaging, then count me as one of many that would be willing to pay a premium for BD Criterions in appropriate packaging.

OK, enough from me. Now I'll go worry about important things in the world, like why I can't get TCM in HD on my cable box.

And Jon's response (bold added by me)

Thanks for taking the time to write in with feedback! Don't worry, the sturdy plastic cases that many of our customers know and love haven't gone away. We didn't want to use the blue case with the built-in plastic topliner, so we've been working on a custom clear plastic case in the blu-ray size and some of our releases will be coming out in that packaging later this year.

We want you to be satisfied with your Criterion purchase(s), so if you are unsatisfied with the Criterion Blu-ray discs that you bought, you may send them to my attention at the address below, and exchange them for any other Criterion title(s) of equal or lesser value. If you choose to do this, please be sure to include your U.S. or Canadian address inside the package as we are unable to sell or send our DVDs outside of North America.

I hope this helps, and please feel free to e-mail me again if you have other questions!

That is great news, kp. Thank you for posting. 8-)
Top 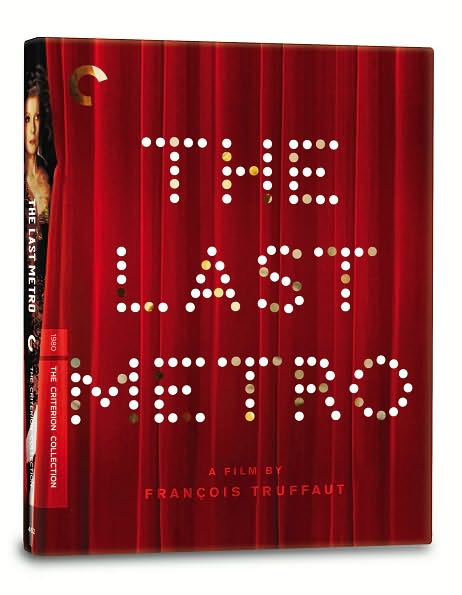 Looks like a digipack to me. Hopefully it will be
Top

So happy to see that the outer cover for TLM is die-cut.
Top

Thanks for the images, I really want The Last Metro, will probably have a big spending spree during the May DVD sales to pick up this as well as some of the other new releases that have caught my eye.
Top

Well, I guess buying The Last Metro and getting X's Los Angeles is a better deal than buying Pandora's Box and getting a Cher concert.
Top

Yeah, that packaging for "The Last Metro" is closely resembling the packaging for Criterion's first blu-ray releases. It's cool to see, though... very nice!

ccfixx wrote:Yeah, that packaging for "The Last Metro" is closely resembling the packaging for Criterion's first blu-ray releases. It's cool to see, though... very nice!

Really? I thought this resembled The Third Man packaging. The blu ray packaging didn't impress me much, so I hope TLM packaging in not similar to Criterion's blu ray packages.
Top

I don't know what either of you are talking about. It's a digipak with a slipcase, so it looks exactly like about half their releases over the last few years.
Top

Matt wrote:I don't know what either of you are talking about. It's a digipak with a slipcase, so it looks exactly like about half their releases over the last few years.

Exactly. Hence my observation that it looks like The Third Man release. It was the first release that came to mind.
Top

You said you hope it's not like the Blu packaging, even though any idiot can see that it isn't. Not to be coarse or anything, but how many more high quality photos of the packaging does one need to be certain about what it looks like?
Top

mfunk9786 wrote:You said you hope it's not like the Blu packaging, even though any idiot can see that it isn't. Not to be coarse or anything, but how many more high quality photos of the packaging does one need to be certain about what it looks like?

Jesus, relax. No need to attack someone based on something of very little consequence. I said it looks like The Third Man release. I didn't want to make a conclusory statement without being 100% certain. I have seen some "high quality photos" of Criterion's blu-ray releases that appear to be the same size as Criterion's DVD releases. For example, the Chungking Express blu-ray release packaging looks like the individual dvd releases' packaging within the Varda box set based on the "high quality photos", when in reality the packaging in the CE BR is much smaller. There is no need for name calling.
Top

In an attempt to divert rapidly escalating hurt feelings....geoffcowgill's witty X / Los Angeles reference went largely unnoticed, so here's a visual aid for the uninitiated. I laughed, at least...

(Schreck pounds the canvass floor of the ring with the meat of his fists in thumping rhythm:)

The crowd picks up the chant. Hair and teeth and fabric and spit and dust bunnies fly... It looks like Dr Snaut has landed a solid right hook on Mfunk and is going in for the second half of a one-two... but Mfunk catches him mid-throw and smashes the meat of his palm up into Snaut's chin, causing his jaws to snap shut before his tongue was tucked fully in. The tip of Snaut's tongue flops and jumps around the ring independent. Sparks explode behind Snaut's eyes as he squawks in pain and reflexively doubles over: on the way down his head whomps right into the cartilage on the bridge of Mfunks nose which was drawn forward by the throw of the chin blast.

Both men collapse to the canvass, stars and tweety birds and bubbles and frying pan pops splat and circle both their heads. The crowd boos & hisses, crying "fake!" In the ensuing mayhem someone swipes the tip of MFunks tongue. Fadeout.
Top

Seriously, all I did was post a picture. No need to turn it into an event

The only thing better than finding Los Angeles by X in my Criterion would be finding Decline and Fall of Western Civilization. Kudos to geoffcowgill.
Top

..and our lovely round card girl:

I'm guessing that we'll be seeing one for the Painleve and PP&P sets too. I'm also glad too see more despite the fact that I've become fond of the clear keepcases.
Top
Locked
3675 posts