Discuss DVDs and Blu-rays released by Second Run and the films on them.
Post Reply
51 posts
Message
Author

The really great news, besides the HD upgrade of what I think is pretty much the definitive Czech New Wave film, is that it also includes Ivan Passer’s wonderful Bohumil Hrabal-inspired short film A Boring Afternoon - and in so doing, it becomes a complete survey of the films that Passer directed in his native language.
Top

Second Run has really increased their pace in terms of BD release. I hope it's because it has become financially sustainable for them.
Top

I'm hoping that the days of DVD only releases are behind us, as a result of this success, if that is the case. Not that the films themselves weren't of merit, but because they deserved a Blu-ray release as well.
Top

I've never seen Intimate Lighting before and I consider myself doubly fortunate to see it in HD for the first time. Blind pre-order when HMV put their listing up.
Top 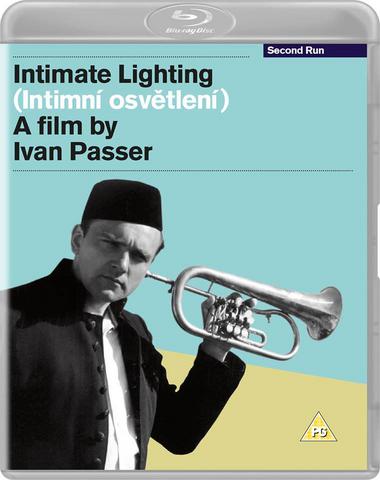 "Through its wonderful observations of life it’s filled with warmth and humour, so it’s a genuine pleasure to watch... an unusual sort of subtle masterpiece"

A 4* review from Ben Nicholson at Cine-Vue
Top

Thank you for adding this film to your catalogue - I'd never seen it previously and was quite taken by it. I look forward to revisiting it in the future; it is the kind of film that feels deceptively lightweight but the closer you look the more it reveals to you, the more you discover in it. I also enjoyed Trevor Johnston's contribution to the booklet.
Top

Finch wrote:Thank you for adding this film to your catalogue - I'd never seen it previously and was quite taken by it. I look forward to revisiting it in the future; it is the kind of film that feels deceptively lightweight but the closer you look the more it reveals to you, the more you discover in it. I also enjoyed Trevor Johnston's contribution to the booklet.

Thank you, Finch. That's exactly how we feel about the film too.
Top

Excellent upgrade from any version I have previously seen. Great to see 4k restorations coming out of Eastern Europe. I noticed the translation in the short used the word “fecking” which is a word I associate with FATHER TED in the same way PORRIDGE used “naff,” is this in order to keep the rating of the package at PG?
Top

A Boring Afternoon 100% definitely precedes it, unless Ivan Passer has misremembered on every occasion that he's discussed both films.

And of course it makes sense, since A Boring Afternoon was literally the first time that Passer was behind a camera calling the shots, since unlike his colleagues on the Pearls of the Deep project he wasn't a graduate of the FAMU directing programme. So it was effectively a calling card that persuaded Barrandov Studios personnel that he could be trusted with a feature.

Oh, and I've just checked my two standard resources for Czechoslovak film data, Václav Březina's Lexikon českého filmů and the Czecho-Slovak Film Database. Březina gives April 1966 as its Czech release month, and the CSFD an even more reassuringly precise 8 April, and I'd be inclined to believe them over the IMDB when it comes to local info.
Top

Thanks Michael, I knew you would have an alternate source. Is the Black Peter commentary your first? I'm interested to hear it due to your detailed and well researched readings on Eastern European cinema we have all encountered elswhere.
Top

It's actually my fourth in toto (after Arrow's The Night of the Shooting Stars - excerpt here - and Indicator's The Deadly Affair and The Snorkel), and second solo, but it's my first for Second Run and my first on a Czech film.

In fact, I originally toyed with the idea of offering them one on Intimate Lighting, but I ultimately didn't think it was a good idea - I'd run out of background info pretty quickly, and it's the kind of film where you really don't want to have to "explain" too much. Whereas there turned out to be a ton of stuff to talk about with Black Peter.
Top

"Remains one of the secret best films ever made... Second Run’s typically superb Blu-Ray package"

"Had more people seen Ivan Passer's sparkling 1965 feature debut, INTIMATE LIGHTING, one of the jewels of the so-called 'Czech New Wave', it would surely feature on more lists adjudicating the funniest films of all time."

It's a simple and beautiful film... [the Blu-ray] looks spectacular with very sharp detail and a beautiful gray scale that pay dividends during the lengthy nocturnal chat that comprises most of the final third of the film. It really looks impressive

Intimate Lighting is simply one of the key films of the Czech New Wave.
It invites multiple viewings and lets us find something new each time... The more specific pleasures are where the film achieves greatness.
It looks terrific... makes for a superb viewing experience.

"The details and truth of life seep through far more memorably here than any dogma ever could."
The Arts Desk on Ivan Passer's INTIMATE LIGHTING
Top

"Ivan Passer arguably never surpassed the films that he made in his native country and language. Both of them, with a total running time of less than 90 minutes, are presented here... Had he never made anything else, his mark on film history would still be indelible."
Michael Brooke reviews INTIMATE LIGHTING in the latest Sight & Sound Magazine
Top
Post Reply
51 posts