Discuss DVDs and Blu-rays released by Second Run and the films on them.
Post Reply
55 posts
Message
Author

...and with cleaned-up subtitles and in the correct 1.85:1 aspect ratio*, so my Clavis edition will soon be redundant.

*Checked with Miklós Jancsó, who double-checked with cinematographer János Kende.
Last edited by MichaelB on Wed May 25, 2011 4:56 pm, edited 1 time in total.
Top

I was hoping that Second Run would tackle this one! I saw new a 35mm print a year or so ago, albeit projected at 1.37:1. I think it is Jancsó's masterpiece. Funny how both this and Szindbád have become two of my all-time favorite films. István Gaál's The Falcons is the other great Hungarian masterpiece that Second Run should pick up, if they haven't worked out a deal already.
Top

Yes! This has been at the top of my Second Run wish-list for a long time. I love this label. Maybe we'll get another early Jancso doc with it.
Top

I don't have anything meaningful today, not having seen the film, but another thanks on putting such interesting titles.
Top

jsteffe wrote:I was hoping that Second Run would tackle this one! I saw new a 35mm print a year or so ago, albeit projected at 1.37:1.

I suspect it was shot open-matte - and it's very very hard indeed to tell by eye what the correct AR should be, as there's scarcely a shot in which the camera and its subjects aren't constantly moving (usually both at the same time). Which is presumably why even Jancsó had to double-check with the man who was actually responsible for the framing - the camera movements were so complicated that János Kende had to take on extra assistants just to keep everything in focus.


I think it is Jancsó's masterpiece.

I'm not sure I'd go quite that far, but for me it's easily the best of the Hungarian colour films that he made between The Confrontation (1968) and Elektreia (1974). Admittedly, I haven't seen Sirocco (1969), but everything I've heard about it suggests that it's a companion-piece to Agnus Dei (1970), which I found very disappointing. To be fair, a Jancsó newcomer would probably find it amazing, but to someone who's seen virtually all his preceding features it looks a little too much like treading water - whereas Red Psalm saw him breaking out of that rut and producing something one of his most aesthetically thrilling films.

Here's my take on it, with apologies for inaccurate guesswork about the aspect ratio. There are also what would normally be considered major plot spoilers, but with this particular film it doesn't really feel like them - it's not exactly a conventional narrative feature.

Oh, and here's a clip, which should illustrate why it's so hard to work out the correct aspect ratio! But there does seem to be a modicum of headroom in the shots when the camera briefly stops moving.
Top

Nice write-up of the film in your blog entry, MichaelB; I hope you get to do the liner notes for the DVD release as well. Apparently the scenarist Gyula Hernádi got the initial idea for the film when he came across a collection of 19th century Socialist hymns in the Hungarian national library. (I'm pretty sure a French-language interview is where I found this comment; I could dig up the citation if you're interested.) In that way the English/French release title of Red Psalm/Psaume Rouge is equally appropriate as the original Hungarian title. Lately I've wondered whether the film also doesn't implicitly allude to the youth movements of '68--I see that you mentioned this in your blog entry too.

In fact, I agree with your observation that the film's Marxist propaganda dates it. In that respect, one could argue that some of his earlier black-and-white 'scope films such as The Round-Up (1965) hold up better today. However, I still feel that his overall artistic vision in this film is so remarkable that it overcomes that limitation. Red Psalm is sheer visual poetry, it's really unlike anything else that has been done before.

The only two Jancsó films which I haven't seen from that period are Sirocco and Agnus Dei; they may not be as strong, but I'd still very much like to view decent copies of them one day.
Top

jsteffe wrote:Nice write-up of the film in your blog entry, MichaelB; I hope you get to do the liner notes for the DVD release as well.

Actually, I'd recommend Raymond Durgnat's essay, if they can clear the rights.
Top

MichaelB wrote: Actually, I'd recommend Raymond Durgnat's essay, if they can clear the rights.

Thanks, MichaelB--I wasn't aware of this essay. So what didn't Raymond Durgnat write about? If there was ever a Renaissance man in film studies, it was him.
Top

Sirocco is an astonishing film. A bit more narrative-y than Red Psalm and Elektra, which are the other two Jancso highlights of that era.
Top

This is one film I would have loved to see in Blu Ray.
Top

kekid wrote:This is one film I would have loved to see in Blu Ray.

I'd love to see all of Jancsó's 1960s and early 1970s films in pristine Blu-ray editions, but the economics just don't add up.

Mind you, if anyone knows any benevolent millionaires with a passion for classic Hungarian cinema who don't mind taking a thumping loss on their investment, do please point them in Second Run's direction.
Top

kekid wrote:This is one film I would have loved to see in Blu Ray.

I'd love to see all of Jancsó's 1960s and early 1970s films in pristine Blu-ray editions, but the economics just don't add up.

Mind you, if anyone knows any benevolent millionaires with a passion for classic Hungarian cinema who don't mind taking a thumping loss on their investment, do please point them in Second Run's direction.

Let me make it clear that I did not intend to criticize Second Run. I appreciate them making this film available to us, even if it is not in Blu Ray format, and I understand that they are working under prevailing constraints.
However, I cannot quite agree with MichaelB's argument. Yes, economics of releasing limited-appeal films on Blu Ray are a serious consideration. However, if we go through what has been realeased on Blu Ray we will find a number of examples of limited appeal films. I do not have information on the sales potential of various films, but I would have thought that some of the Zulawski's released by Mondo Vision, some of the Pedro Costa's, and the Brakhage collection will have limited appeal to mass audiences. But they have come out in wonderful editions. (You may have other, better examples). They came out because someone with passion for them decided it was worth doing even if it did not make money. Which directors and films are lucky enough to find such passionate advocates seems to be a matter of chance. Clearly Zulawski found it in Mondo Vision (and based on exchanges going on on this forum they are no millionnaires). I just wanted to express a wish that Jancso would find such an advocate. I can do that without getting my head chopped off, right?
Top

Believe me, if anyone put Jancsó out on Blu-ray, I'd use every platform I have to trumpet it from the rafters.

But Kekid's comparisons don't stand up under scrutiny. First of all, attempting to draw comparisons between UK and US labels ignores the fact that the latter have access to a much bigger market. (Yes, I know that the overwhelming majority of Second Run's releases are region-free, but import sales are pretty negligible in the wider scheme of things).

Secondly, Criterion is a comparatively rich company with a great many profitable titles, so they can afford to risk a loss on a labour-of-love title like the Brakhage release, which must have cost an absolute fortune to produce given the amount of experimentation with scanning and encoding that they had to do. Second Run doesn't have any Armageddons or Benjamin Buttons to fall back on - a hit for them is Marketa Lazarová or Valerie and her Week of Wonders.

I'm not familiar with the economics of Mondo Vision's operation, so can't comment on specifics there - except to say that their Żuławski releases are all on DVD so it's a slightly strange example to bring up given that the original complaint was about Red Psalm not being on Blu-ray!

Anyway, the fact remains that Second Run is currently the only label anywhere in the world that's really trying to push Jancsó in English-friendly form now that Clavis's releases seem to have stalled. I've already pitched his films to three UK labels who have already moved into Blu-ray and the response made a brick wall look friendly and inviting. Based on comments you've made elsewhere, I'm guessing you're in the US, where the rights to the bulk of Jancsó's catalogue are presumably up for grabs. So there's nothing to stop you from lobbying US-based labels, and we'll all be hugely grateful to you if you succeed.
Top

MichaelB wrote: So there's nothing to stop you from lobbying US-based labels, and we'll all be hugely grateful to you if you succeed.

I asked Criterion about this title a few years back and they told me that it was one of their most heavily requested titles.
Top

It's probably tied up with Kino or the New Yorker catalogue or something like that.
Top 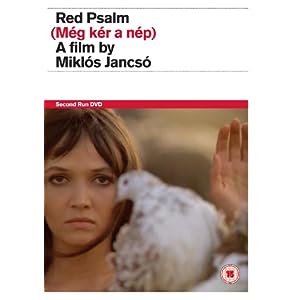 The release date has been put back to mid October.
Top

As Bikey explained in the Kung Fu Master thread, all Second Run releases have been delayed a few weeks while they sort out the repressing and restocking of their back catalogue, destroyed during the recent Sony DADC fire.

Which is a particular pity in this case, as I really can't wait to see the new transfer - I can't even watch my old Clavis DVD as I lent it to Second Run so they could make sure that their version was superior.
Top

I thought the delay was due to the fire. 10th October to be exact. To think the rioters kept JD Sports intact, and were happy to burn classic European cinema. They have their priorities all wrong.
Top

That does go more in line with the rest of their Jancso's, but I was really loving the other one. Honestly how is it that SR consistently gives DVDs two great covers when most companies have trouble with one.
Top

knives wrote:That does go more in line with the rest of their Jancso's, but I was really loving the other one. Honestly how is it that SR consistently gives DVDs two great covers when most companies have trouble with one.

Simplicity. It's effectiveness can be underrated.
Top