Discuss DVDs and Blu-rays released by Eureka/Masters of Cinema and the films on them. If it's got a spine number, it's in here.
Forum rules
Please do not clutter up the threads for MoC titles with information on pre-orders. You can announce the availability of pre-orders in the MoC: Cheapest Prices / Best Places to Buy / Pre-Orders thread. Any posts on pre-orders in any other thread will be deleted.
Post Reply
205 posts
Message
Author

I'm wondering if anyone here has anything to add about Kino vs. MOC. I'm tempted to get the MOC due to the (what seems to be) incredible package and the earlier shorts being included. The picture quality of the blu rays and the fact that I have the rest of the Kinos, however, has made it hard for me still to decide what package to pick up. Can anyone comment at this point on a comparison of the two?
Top

I'd go for the MOC because though the picture quality is obviously lesser it is not lesser by much and the MOC package is one of the best ever.
Top

They're both great and worth having, but I'd go for the Kino: the picture quality is pretty significant to my eye, and I'd put the visual essays on the Kino over the commentaries and booklet on the MoC. Obviously, ymmv.
Top

Honestly the biggest thing for me probably is having the Arbuckle shorts...which is why I've always been waiting to just get the MOC. Are they as hysterical as the rest of the set/the rest of Buster's silent stuff?
Top

Does MOC have the restored version of Hard Luck?
Top

Yes it does, with the complete ending. I haven't seen the Kino release, but warmly recommend the MoC. The roundtable discussion in the massive booklet is a genuinely great read.
Top

I know this is the last thing prospective buyers will want to hear, but you probably need both. The Keaton shorts are an incredible body of work, and you'll want to see them on BluRay, but the MoC set also includes all the Arbuckle / Keaton shorts - as 'bonus features' go, this is as massive as it gets - and the book is an absolute wonder. Keep your eyes open for a Eureka or Amazon special and you'll probably be able to get your moneysworth without even cracking open the DVD cases.
Top

Drucker wrote:Honestly the biggest thing for me probably is having the Arbuckle shorts...which is why I've always been waiting to just get the MOC. Are they as hysterical as the rest of the set/the rest of Buster's silent stuff?

They're pretty good, but they're distinctly Fatty Arbuckle shorts with Buster Keaton in them, rather than Buster Keaton shorts. They don't have the sort of skewed, autistic logic that Keaton's films tend to build their situations on, but they're definitely full of good timing and gags and performances and so forth.
Top

Yeah, they're very good examples of a quite different kind of humour, and it's fascinating to watch Buster develop his persona in somebody else's world. Once he started making his own movies, he very quickly came up with an entire fictional world predicated on that persona.
Top

Drucker wrote:Honestly the biggest thing for me probably is having the Arbuckle shorts...which is why I've always been waiting to just get the MOC. Are they as hysterical as the rest of the set/the rest of Buster's silent stuff?

They are the closest thing the movies have had to Tom & Jerry or Looney Tunes episodes. Essentially live-action cartoons; surreal, crazy, full of non-stop motion, all the more amazing because it's humans doing all that impossible stuff.

Rather different from Keaton's personal style, but very enjoyable.
Top

Blu-Ray upgrade coming in the next quarter
Top 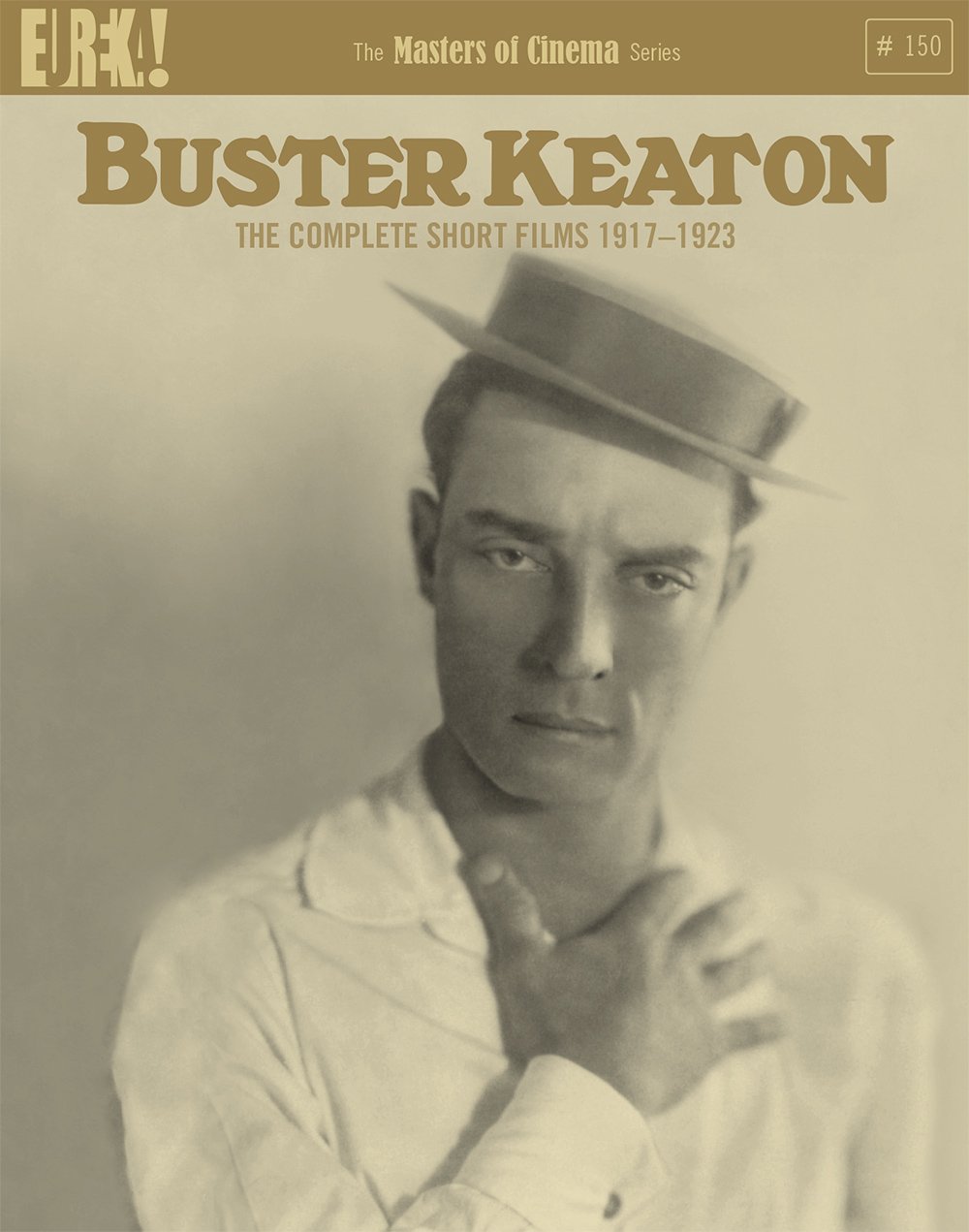 I hope the book from the DVD edition will be included here.
Top

I'll be waiting for a Beaver review before I decide whether to upgrade. If the 1920-1923 shorts are only as good as my Kino versions, I'll probably stick with the DVD set.
Top

1080p presentations from new restorations
Multiple scores on selected shorts
Audio commentaries by Joseph McBride on The ‘High Sign’, One Week, Convict 13, The Playhouse, The Boat, and Cops
Newly discovered version of The Blacksmith containing four minutes of previously unseen footage
Alternate ending for Coney Island
Alternate ending for My Wife’s Relations
That’s Some Buster, a new exclusive video essay by critic and filmmaker David Cairns
An introduction by preservationist Serge Bromberg
The Art of Buster Keaton, actor Pierre Étaix discusses Keaton’s style
Audio recording of Keaton at a party in 1962
Life with Buster Keaton (1951, excerpt) - Keaton reenacts Roscoe Arbuckle's "Salomé dance", first performed in The Cook
PLUS: A 184-PAGE BOOK containing a roundtable discussion on Keaton by critics Brad Stevens, Jean-Pierre Coursodon, Dan Sallitt; a new essay and detailed notes on each film by Jeffrey Vance, author of Buster Keaton Remembered; a new essay by Serge Bromberg on the two versions of The Blacksmith and other discoveries; the words of Keaton; and archival imagery.
Top

So happy they've retained the book and I can ditch the DVD box.
Top

I know it's probably too late now for the producer of this set to do anything about it, but there are apparently a number of correctable errors that feature in these new Lobster restorations that have made their way into both the French Arte release and this year's Kino set. Chief among them are a number of intertitle gags that have been translated in such a way (presumably from the originals into French and then back into English) that they now no longer work as gags. Descriptions of these issues and comparisons to intertitles found on older sets, including the original MoC release, can be found here.
Top

Sadly, I can't find where I read that on FB and quote the exact sentences, but it seems that the set could have been delayed by Eureka following Eddie's post to correct what can still be corrected.
What I recall though is that if that was a lucky call : the post has been been caught 12 hours before the discs replication at Sony.

We'll see what happens precisely. In the meantime, I'll try to gather additional confirmation about that.
Top

I'm very happy to confirm that this was indeed the case. In fact, it wasn't just Daydreams and Love Nest that were problematic: there were a couple of dodgy intertitles in Hard Luck as well. All have been fixed.

All 32 titles were checked during this process, but the vast majority clearly featured original intertitles - it was the ones with Lobster reconstructions that needed close inspection. Although even then most of them were word-for-word identical to the originals.

I can also confirm that the corrected discs have all been signed off, and so hopefully the manufacturing process will already be under way. And I can't imagine too many people complaining about the delay, given the reason.
Top

Just got an email saying it's been dispatched, pretty quick turnaround given the intertitle corrections!
Top

Anyone else's Keaton set a bit wonky? The top of the front and back cover has been folded over a bit. Boxset otherwise looks mint.

I have a question about book included with this release - is it glued together properly? Maybe it's just me, but I often have problems with thick booklets. Especially bad one was with "Passion of Joan of Arc" book - it actually fell to pieces after first reading, even though I honestly tried not to open it too wide.
Top

I only read a few sections of it but the book seemed fine in mine, didn't open it that wide but didn't notice any gluing problems either.

I've been working my way through this the past few weeks (didn't get any of the past sets) and I'm having a blast. I hadn't seen any Arbuckle shorts so the 13 or so included were a fascinating introduction. Now I'm almost done with the second disc so I'm finally at the Keaton-starring shorts. I vaguely remember seeing a few shorts like "One Week" and "Hard Luck" when I was a kid at the pre-Cinefamily Silent Movie Theatre so I'm really enjoying revisiting them.
Top
Post Reply
205 posts