Discuss DVDs and Blu-rays released by Eureka/Masters of Cinema and the films on them. If it's got a spine number, it's in here.
Forum rules
Please do not clutter up the threads for MoC titles with information on pre-orders. You can announce the availability of pre-orders in the MoC: Cheapest Prices / Best Places to Buy / Pre-Orders thread. Any posts on pre-orders in any other thread will be deleted.
Post Reply
10 posts • Page 1 of 1
Message
Author 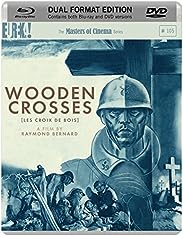 The film that most firmly established the talent of French director Raymond Bernard before his epic adaptation of Victor Hugo's Les misérables, Wooden Crosses [Le croix de bois] was widely hailed at the time of its release in 1932 for its searing depiction of the horrors of the European front during World War I; subsequently, Bernard was named soldier of honour of the 39th Infantry Division.

Adapted from a novel by Roland Dorgelès (a former corporal of the 39th), Wooden Crosses offers a kaleidoscope of cinematographic technique to present a visceral, enveloping recreation of one regiment's experience of battlefield hell. (Its entire cast is comprised of war veterans.) It is an epic tapestry that rivals John Ford's Four Sons and Lewis Milestone's All Quiet on the Western Front in both its poetry of trauma and steadfastness of conviction that war must be held in contempt.

From a gorgeous new Pathé restoration carried out for the centenary for the start of the Great War, Raymond Bernard's Wooden Crosses retains a ferocity that continues to reverberate across generations. The Masters of Cinema Series is proud to present this new restoration of the film in a special Dual Format (Blu-ray + DVD) edition.

I've extremely happy for this release, less to get the film in a Blu-ray edition (though I can't wait for that), but to see the reputation of this film elevated (I think it is still virtually unknown in the UK), especially with all of the commemorations for the First World War occurring.

There is not much more that I could add to my previous post on the film, but this will definitely be getting my number 1 slot in the War Films List vote.
Top

Add me to the list of those who have never heard of it. I think I'll blind buy this after reading some of the glowing reviews.
Top

Though very similar films in terms of content, I think I prefer it to All Quiet on the Western Front. IMO, there is a more general sense of urgency, while maintaining a very somber meditative tone. I also wish it was more well known in the US (outside of film enthusiasts/critics).
Top

We can confirm that WOODEN CROSSES will be released on 30 March 2015 in a Dual Format (Blu-ray and DVD edition) as part of the Masters of Cinema Series. From Raymond Bernard, the director of the epic and definitive French screen adaptation of Les misérables. Alongside All Quiet on the Western Front and Paths of Glory Movie, WOODEN CROSSES is perhaps the greatest depiction of World War I ever put on screen. Presented from a dazzling new restoration carried out by Pathé in 2014 to mark the 100 years since the start of the war. Available to pre-order now from Amazon http://amzn.to/1CipaxG" onclick="window.open(this.href);return false; For further details http://bit.ly/1CTtq4L" onclick="window.open(this.href);return false;

Like Les Misérables, extras are going to duplicate the French release.
Top

It is indeed very similar to All Quiet on the western front but I think it's sadder, bleaker than All Quiet. There is some kind of hope in All Quiet I didn't find in Wooden Crosses.
It's very well crafted (though it also contain an overly extended battle sequence, just as I find the bombing sequence in All Quiet overly extended), well played and quite fine from a writing point of view.
It's a very good movie overall, well paced, and the restoration is also marvelous.

Hopefully, Eureka will include all the extras in HD : Pathé placed them on a separate DVD so they're in SD in France (which is too sad for the restoration featurette).
Top

Is it just me or does the MOC blu-ray look no better than the Eclipse dvd. Some grabs look like just a blown up image, with no greater resolution & a cropped image, not to mention darker.
Top

Unless it's just Gary now making absolutely zero attempt to match frames, I would say the source used for the new restoration was a different negative from a different camera than whatever was used for the transfer on the Eclipse DVD. Gary theorises about this in his review. Comparison 3 for instance is a completely different shot. If that is the case then all bets are off when it comes to differences in darkness and cropping (and don't forget the aspect ratios are not the same). As for detail and resolution, I think it looks much better than the Eclipse version. Try blowing up one of the DVD grabs yourself!
Last edited by EddieLarkin on Sun Mar 15, 2015 7:06 pm, edited 1 time in total.
Top

Dr Svet's review of the Pathé and Moc. I think toggling back and forth between the two shows some pretty clear differences in favor of the Pathé. Svet's screencaps for the MoC seem to have treated it better than Gary's.
Top
Post Reply
10 posts • Page 1 of 1