Yes, both are available for the first time on DVD in the U.S.
Top

Extras: To be announced
Top

Coming October 2nd on DVD and Blu-ray!
Newly Remastered in HD from a 4K scan of the restored fine-grain master!

B&W 83 Minutes 1.33:1 Not Rated
One of the all-time great Hollywood chillers! A murderer is targeting disabled young women in a New England town, and Helen (Dorothy McGuire, Gentleman’s Agreement), a mute servant in a Gothic mansion, is terrified she's next. Mrs. Warren (Ethel Barrymore, Deadline – U.S.A.), the invalid, bullying mistress of the house, warns Helen to leave at once, rather than rely on her weak son and stepson for protection. But even as Helen is packing her things, she suspects she may be too late and the murderer is closer than she ever imagined. This terrifying and suspenseful thriller was produced by David O. Selznick (Duel in the Sun), directed by Robert Siodmak (Cry of the City), shot by Nicholas Musuraca (Out of the Past) and written by Mel Dinelli (The Reckless Moment), based on a novel by Ethel Lina White (The Lady Vanishes). The wonderful cast includes George Brent (Dark Victory), Kent Smith (The Night Stalker), Rhonda Fleming (Those Redheads from Seattle), Elsa Lanchester (Witness for the Prosecution), Sara Allgood (The Lodger), Rhys Williams (The Farmer’s Daughter) and James Bell (I Walked with a Zombie). The great Ethel Barrymore received a supporting actress Academy Award® nomination. 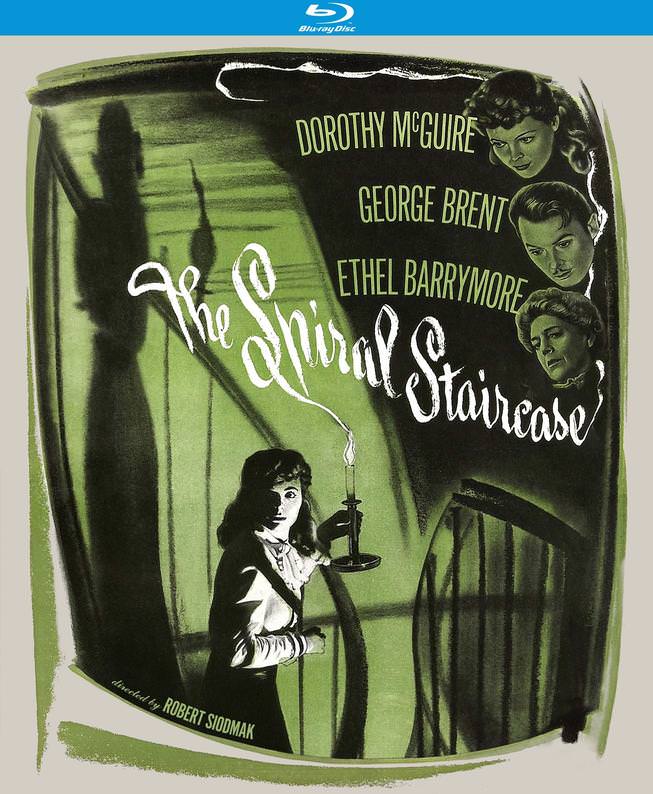 That is a great cover.
Top

Color 97 Minutes 1.85:1 Rated R
Time is running out for Dexter Cornell (Dennis Quaid, The Big Easy, Far from Heaven). He has just 24 hours to find out who poisoned him... and why. In his bizarre and deadly search, everyone has a secret. Everyone is a suspect. Even the woman (Meg Ryan, Sleepless in Seattle) who loves him. Directed by Rocky Morton and Annabel Jankel, creators of superstar "Max Headroom," D.O.A. pulsates with explosive action and sizzling performances by Quaid and Ryan, two people who find themselves suddenly living on the edge. It's a night on the run, filled with fear, danger... and passion. The stellar cast features Charlotte Rampling (Farewell, My Lovely), Daniel Stern (Celtic Pride), Jane Kaczmarek (TV’s Malcolm in the Middle), Robin Johnson (Times Square), Brion James (Blade Runner), John Hawkes (Winter’s Bone), Robert Knepper (TV’s Twin Peaks), Jack Kehoe (Serpico) and Elizabeth Arlen (The First Power).

Very underrated little neo-noir with some fantastic visuals. Ryan and Quaid were the rare real-life couple who had a lot of on-screen chemistry. Interesting how the film’s directors, who were also in a long-term relationship, recorded separate commentaries
Top

beamish14 wrote: ↑
Mon Aug 06, 2018 4:39 pm
Very underrated little neo-noir with some fantastic visuals. Ryan and Quaid were the rare real-life couple who had a lot of on-screen chemistry. Interesting how the film’s directors, who were also in a long-term relationship, recorded separate commentaries

Annabel Jankel lives in the U.K. and Rocky Morton lives on L.A. They divorced in 2005 and had two kids together.
Top

Damn you aren't kidding with that Insider thing
Top

I Bought a Vampire Motorcycle (1990) with optional English Subtitles

Color 101 Minutes 1.85:1 Unrated
When a Satanist biker is killed by a gang of Hells Angels, an evil spirit he was summoning possesses his old Norton Commando motorcycle. So, when unsuspecting local courier Nick "Noddy" Oddie (Neil Morrissey, TV’s Men Behaving Badly) becomes the bike's new owner, little does he know that it runs on blood and has a habit for killing Hells Angels and anyone else who gets in its way. Veteran British TV director Dirk Campbell (In the Night Garden…) made his feature film directorial debut with this cult classic which co-stars Michael Elphick (The Element of Crime), Anthony Daniels (C-3PO of the Star Wars franchise) and Burt Kwouk (Cato Fong of The Pink Panther films).

Color 101 Minutes 1.85:1 Rated R
Hollywood superstars Liam Neeson (The Grey, Taken, Run All Night) and Sandra Bullock (Gravity, The Heat, Ocean’s Eight) co-star with Oliver Platt (Funny Bones, The Ice Harvest) in this outrageously offbeat action-comedy about what happens when a gutsy undercover cop suddenly loses his legendary nerves of steel. The only way Charlie (Neeson), a respected D.E.A. agent traumatized by a hair-raising run-in with some ruthless gangsters, can continue to do his job is with the embarrassing treatments of his attractive nurse (Bullock) and the questionable psychotherapy provided by his highly unstable support group. And since he's stuck in a deep-cover sting operation until he nabs a wisecracking, trigger-happy Mafia leader (Platt) who scares him to death, Charlie can only hope to fake his tough-as-nails image long enough to make this one last bust... and make it out alive. Veteran television writer Eric Blakeney (TV’s Wiseguy and 21 Jump Street) made his directorial debut with this high-caliber comedy hit co-starring Mary McCormack (High Heels and Low Lifes), Michael DeLorenzo (TV’s New York Undercover), Richard Schiff (TV’s The West Wing), Mitch Pileggi (Walter Skinner of the The X-Files franchise) and Frank Vincent (Goodfellas).

Color 86 Minutes 1.85:1 Rated R
They’re not bad girls… they’re just behaving that way! Minnie Driver (Grosse Pointe Blank, Hope Springs) and Mary McCormack (K-PAX, Gun Shy) star as best friends who take on low-life thieves in this hilarious high-energy action-comedy. It all starts when Shannon (Driver), a nurse at a London emergency room, and Frances (McCormack), a struggling American actress, overhear bank robbers on a radio scanner making off with a fortune. They make contact and demand a cut at the loot. But when the stubborn felons refuse to hand over a penny and threaten their lives in return, the girls decide to raise the stakes and give the thugs a run for their money. Packed with daring heists, double-crossings and high-speed hilarity, High Heels and Low Lifes is the most fun you can have this side of the law. Funnyman Mel Smith (Radioland Murders, Bean) directed this hilarious action-comedy co-starring Michael Gambon (Gosford Park), Kevin McNally (Pirates of the Caribbean franchise), Mark Williams (Harry Potter franchise) and Danny Dyer (The Football Factory). Screenplay by Kim Fuller (Spice World and Tracey Takes On…) from a story by Fuller and Georgia Pritchett (TV’s Veep).

I remember being surprised at how much I enjoyed Gun Shy back when it was released, but literally the only thing I remember about it now is the final shot, sans context; I'll be curious to see if it stands up as a modest but fun comedy two decades later.
Top

Blu-ray.com's review is up and it doesn't appear to have gotten that new 4K master that Kino announced when they announced the title.
Last edited by dwk on Tue Aug 07, 2018 10:21 pm, edited 1 time in total.
Top

Not sure what the Blu-ray.com reviewer, who's usually all over the place with his reviews was watching. You have to blind not to see the difference between the two releases.

This restoration was done by Disney and all their later restorations are 4K scans of the OCN. We're trying to get more detail regarding this transfer.
Top

The Blu-ray.com reviewer is useless anyway. I can’t think of any review he’s done where the Video Quality section had anything to do with the video quality. He just rambles about nonsense. “Grass is green. Clothes are made of fibrous fabric. Skin tones are available. Outdoor scenes feature nature. I give it two out of five.”

I mean, here’s an actual quote: “Clothing is adequate, mixing ornamented evening wear with more militaristic outfits.” How does that tell me anything about the video quality of the disc? Between Mr. Orndorf and Dr. Bassoon, Blu-Ray.com is like reading the result of someone filtering an essay through three languages on babelfish.
Top

From the same reviewer's review of Argento's Opera:

It never had a US release?
Top