Discuss DVDs and Blu-rays released by Criterion and the films on them. If it's got a spine number, it's in here. Threads may contain spoilers.
Post Reply
266 posts
Message
Author

Even with the added specs, I'm still leaning towards not buying it. I already own the R2 Optimum 2-disc set and already have the theatrical cut, the extended cut, and the Bertolucci/Thomas/Sakamoto audio commentary of the theatrical cut. The other extras just don't sound interesting to me. The Optimum disc already has good video transfer and a damn good making-of documentary, which I doubt any Criterion extra would be able to top. "Interesting" extras would be an interview with John Lone, Joan Chen, composer Cong Su (who is probably the only Oscar winner not appearing on the Criterion disc), but even those wouldn't necessarily make me want to buy it.
Top

I think, taking aspect ratio into account, the Optimum might even be considered *better* than the more expensive Criterion.

Admittedly, I still haven't watched my copy of the Optimum (this holiday, I'm finally sitting down and watching all those epic DVDs of mine that I never find time for)
However, one point in Criterion's favour; I always heard the Optimum Television Edit was very mediocre picture quality? Even so, brighter, sharper (but still SD) picture vs inferior picture that *doesn't* miss out on 20% of the image. I'd still call it even (at least for specs; then Optimum wins for the much lower price)
Top

CSM126 wrote:OK, as far as which versions of the film are included here, I think we have something of an answer. The criterion page has changed to reflect a run time of 164 minutes, which would be the length of the theatrical cut if I'm not mistaken. And the features list the "Extended television version". So I was right: Theatrical cut and Extended cut. Yay me.

Latest blog post clarifies this: the theatrical release is the director's cut, the television version is an earlier contractually-demanded alternate.


Bertolucci wrote:I would be very pleased to present the theatrical version for The Last Emperor, but I'm perplexed on presenting the director's cut, because I wouldn't know what else to say about a version that in my opinion is not much different from the other one, just a little bit more boring (as very often the director's cut can be). That's my sincere feeling.

I've asked this before, but is Criterion going to release more Bertolluci? I would definitely buy a criterionized version of Last Tango in Paris...
Top

Mental Mike wrote:I've asked this before, but is Criterion going to release more Bertolluci? I would definitely buy a criterionized version of Last Tango in Paris...

Before the Revolution has been planned for ages. (I'd recommend the Italian R2 RHV - 2-Disc and subbed, if you aren't set on just getting a Criterion.)

Last Tango SE has been announced for this year by MGM, so there's no chance of a Criterion.

Still no site of the brilliant and essential The Spider's Stratagem, an r1 La Luna, or The Tragedy of a Ridiculous Man.
Top

zedz wrote:Latest blog post clarifies this: the theatrical release is the director's cut, the television version is an earlier contractually-demanded alternate.

Ha! That's wonderful. If the theatrical cut wasn't here then I think it would go against Criterion's "mission statement." Now knowing that it's also Bertolucci's preferred cut makes me smile. The "director's cut" label has become a marketing tool more than an artistic victory anyway.
Top

souvenir wrote:If the theatrical cut wasn't here then I think it would go against Criterion's "mission statement." Now knowing that it's also Bertolucci's preferred cut makes me smile. The "director's cut" label has become a marketing tool more than an artistic victory anyway.

Good news indeed. I'm very happy to be wrong about it. I'd always heard that Bertolucci had disowned the theatrical cut in favor of the long version. Turns out it was the other way around. It's been a while since I've seen either one, but I always preferred the theatrical version (largely because I have the attention span of a four-year-old). Now I don't have to feel like a heretic for doing so.
Top

Anyone know how long the extended TV version is? (Sorry if this is already mentioned earlier in the thread). And is it 1.33:1?

The beaver will be on it soon, I suppose, to give us the final look, right?
Top

The beaver will be on it soon, I suppose, to give us the final look, right?

I'm sure Gary will... I haven't gotten a chance to see it yet.
Top

Interesting that the framing of the theatrical vs television versions is, despite the same 2.2 AR, very different in some of those caps. Strange.

Is the difference in quality between these two versions just a result of compression? Also seems strange to me. Looks to me like contrast levels differ.
Top

It's 2.0 not 2.20, and the amount of information lost is devastating, I don't understand how anyone can praise this set regardless of the quality of the picture when enough of the picture is gone for a scene to change meaning. Example: 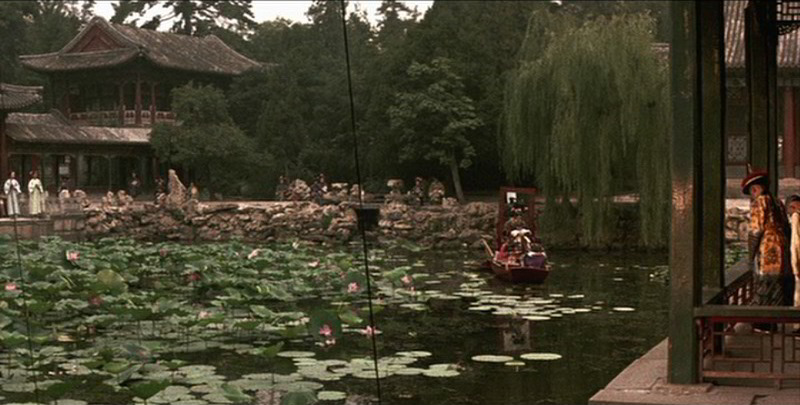 From three people on a porch to one and a hint of a second.
Top 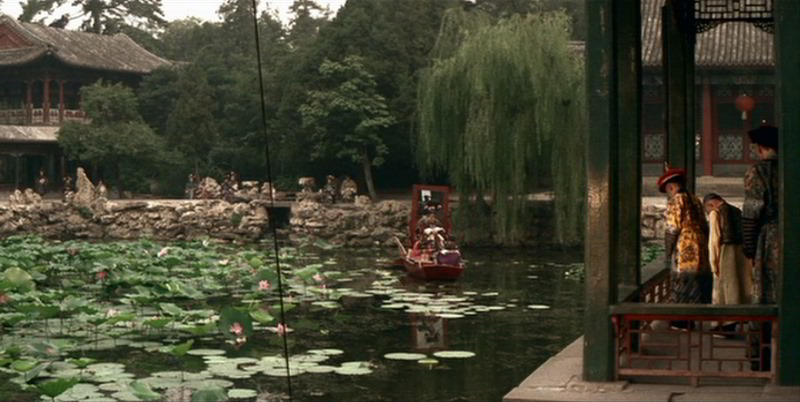 Yeah, and the cropping looks just as bad in the theatrical version. I will NOT be buying this release and Criterion should have known better.
Top

Denti, you're right, I misread which was which, and yet Soy Cuba is also right: now all of the information is missing from one side, changing the spatial focus of the shot. Also look at all the caps on the Beaver that feature a lone figure central to the frame, the reformatting brings them closer/fills up more of the frame, diminishing their isolation within these shots.
Top

You did pick the most damning comp Domino - it was the one that really jumped out at me as well. Whether you pick the Criterion TV or theatrical screenshot, both are much worse compositions than the original at 2.35.

2.0 AR is just not defendable. I'm sure it's a lovely package and I still might get it but it's surely compromised for no good reason. I congratulate Gary for being able to work up enthusiasm in spite of that. I had hoped they were letting Storaro have the theatrical cut according to his whim and would slip the TV version in as 2.35, but no such luck.

On the other hand, I might blow it off and try and get the R2 now. Decisions...
Top

Being no great fan of this film, I hit the jackpot getting to save a whole sack of loot...
Top

I haven't seen this film, but I am an O'Toole fan. How big is his part in it?
Top

It`s a sad thing indeed that they changed the AR that much. Don`t really understand how they can do something like that.
Will be getting it nonetheless though, but still....
Top

Never mind the AR - it's the colors I have a problem with now. It looks so cold and drab. And it's a shame because I was really thinking of "upgrading" to this new Criterion being a big fan of the film and all but now, I'm not so sure.
Top

What they should have done is release the theatrical version in both ARs.
Top

denti alligator wrote:What they should have done is release the theatrical version in both ARs.

As great as that would've been, it's none too feasible in regards to the number of discs it would've pushed the set to. I'm also sure that it would've gotten Vittorio's knickers in a twist. The only solution for fans of the film is to buy the R2 as well, I guess.
Top

Lino wrote:Never mind the AR - it's the colors I have a problem with now. It looks so cold and drab. .

Thats the first thing I thought, even above the 2.0ism. The film loses it's mythical pallette and turns into Crime Drama Colorville, cold and grey.


Cronenfly wrote: I'm also sure that it would've gotten Vittorio's knickers in a twist. The only solution for fans of the film is to buy the R2 as well, I guess.

I think their decision to honor a dilletante's desire to say "the work I did must not remain the work I did. We must make it What I'd do now," is not to be admired.

Ex post facto "directors cuts" are one thing as an add on bonus. "Cinematographers cuts" made decades after the fact, when the original film indulged the artisans involved without interference (i e some of the scope-to-academy controversies w Russ Metty), are odd to me and should be against the rules. That's CC hobnobbing in telecine. How can people trace the ideas and development of cinematographers visions over the decades if you cannot observe the changes in their form and theories, if you allow their Current State to whitewash their old work? WHo sits around and says the "new concept" is better than the old "work completed"?

When your cinematographer has gone insane, and wants to radically restructure what to some is considered a pre-existing masterpiece on its own terms, what to you do? When does it end. When does CC so "down boy! This film is finished as far as we understood it."
Top
Post Reply
266 posts