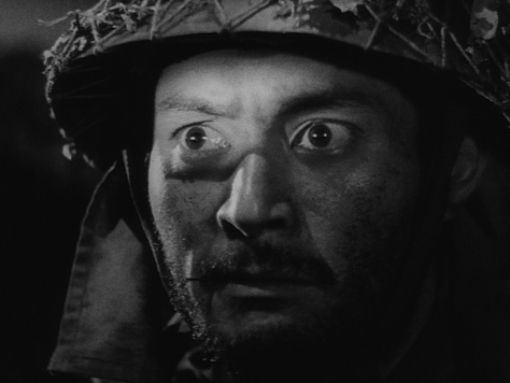 One of the towering masterpieces of Japanese and world cinema, this three-part war epic has rarely been seen in the UK, at least partly because of its dauntingly gargantuan nine hour length. Director Masaki Kobayashi (Harakiri) was attracted to Junpei Gomikawa’s source novel because he recognised himself in the character of the protagonist Kaji, an ardent pacifist who came of age during the aggressively militaristic 1930s and 40s.

In part one, No Greater Love, Kaji is relocated to a mine-supervising job in Manchuria, where he is horrified by the use of forced labour. Part two, Road to Eternity, sees him conscripted into the Japanese army and forced to fight in the name of an aggressively imperialist cause. Part three, A Soldier’s Prayer, deals with the consequences of Japan’s defeat, not least for Kaji himself.

Throughout, Kobayashi unflinchingly examines the psychological toll of appallingly complex decisions, where being morally ‘right’ risks outcomes ranging from ostracism to savage beating to death. As Kaji, Tatsuya Nakadai (Sanjuro) is in virtually every scene, providing a rock-solid emotional anchor – and a necessary one in Japan, where the film was hugely controversial for being openly critical of the nation’s conduct during WWII. But it’s this willingness to confront national taboos head-on that makes it such a lastingly powerful experience.

Arrow presents Masaki Kobayashi’s epic The Human Condition in the aspect ratio of 2.35:1. Arrow presents the entire film in a couple of ways: the 3 part international version, with each part presented on their own individual dual-layer disc, and then the 6-part Japanese version, which more or less breaks up the individual longer versions on each disc into two separate parts, using seamless branching. The presentation is delivered in 1080p/24hz. This is a Region B release and a player that can playback region B content is required for North American viewers.

The source materials do limit things mildly, and it seems to somewhat vary from part to part or even scene to scene, depending on the quality of the materials, but overall this does look very pleasing. The opening credits for each section can look heavily damaged, and when the first part started it didn’t bode very well, but after the credits finish the damage becomes less frequent and/or noticeable, and, in fact, most of the film (all three parts) is pretty spotless. Having said that, though, specs and scratches do appear, but they rarely draw attention, only getting heavier during what I suspect might be reel changes. Some of the more frequent issues that can be a bit more noticeable are instances of flicker or pulsing, along with the frame maybe jumping a bit. These latter source problems are, at the very least, not consistent, though, through the 9-and-a-half-hours. Also of note is when someone is speaking Russian or (what I assume is) Mandarin, Japanese subtitles do appear on the right hand side of the frame, burned into the print used unfortunately. The Criterion DVD featured these subtitles as well so it’s possible the same source materials were used here (I didn’t receive a copy of the booklet so I’m not sure where these transfers were sourced from).

The digital transfer itself is perfectly fine, though. Compression doesn’t appear to be an issue, allowing details to be sharp. These details can pop, particularly in the various fields, delivering a stunning amount of detail where you can just about make out the individual blades of grass. Contrast looks decent and the gray scale is nicely rendered. To me it looked quite filmic and pleasant, a beautiful upgrade over Criterion’s DVD edition, which now shows more obvious compression. 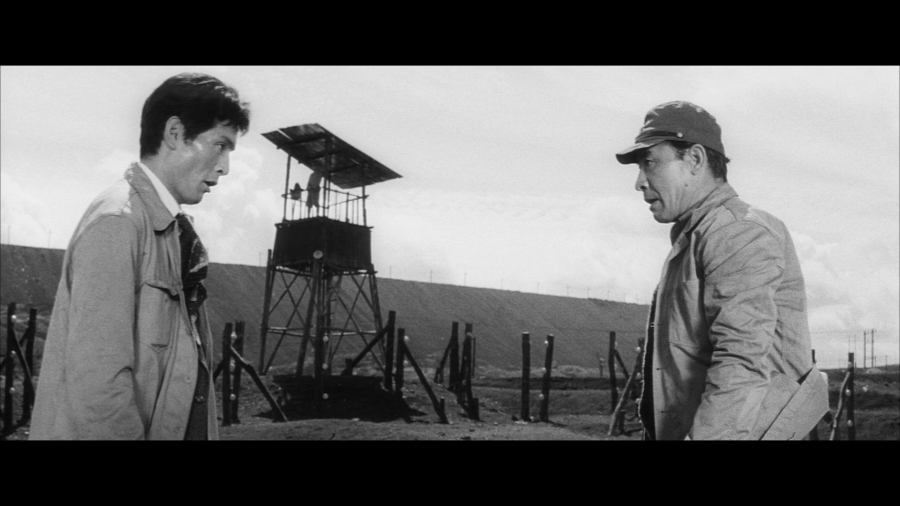 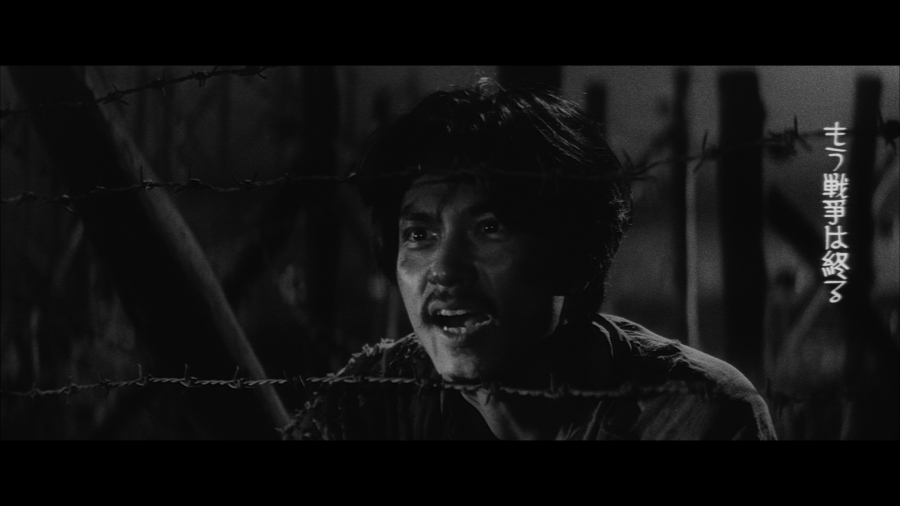 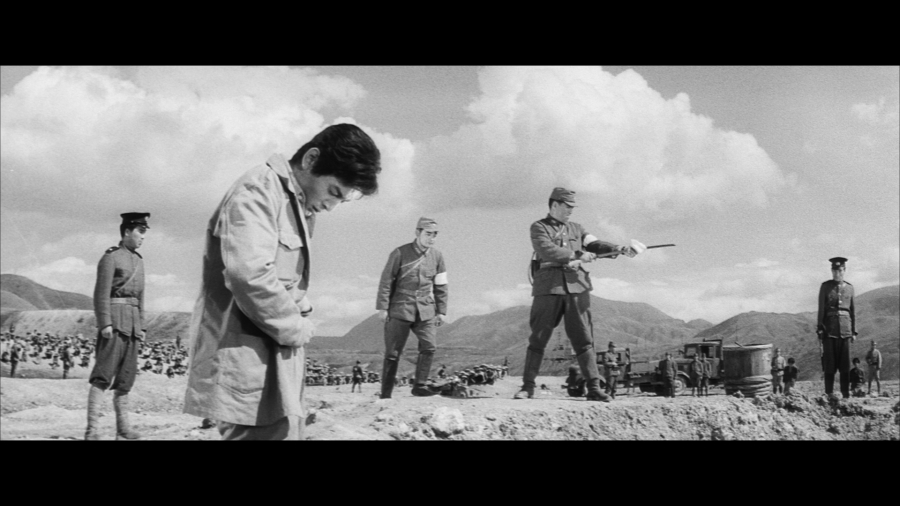 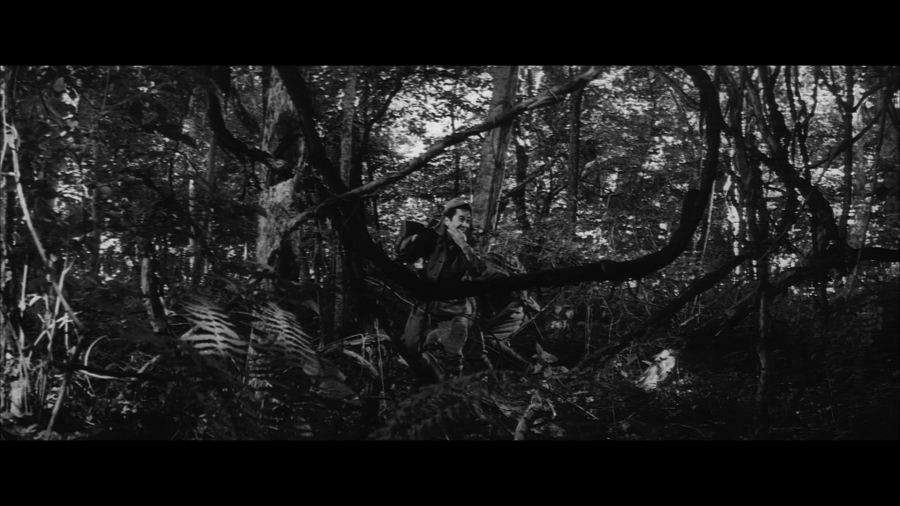 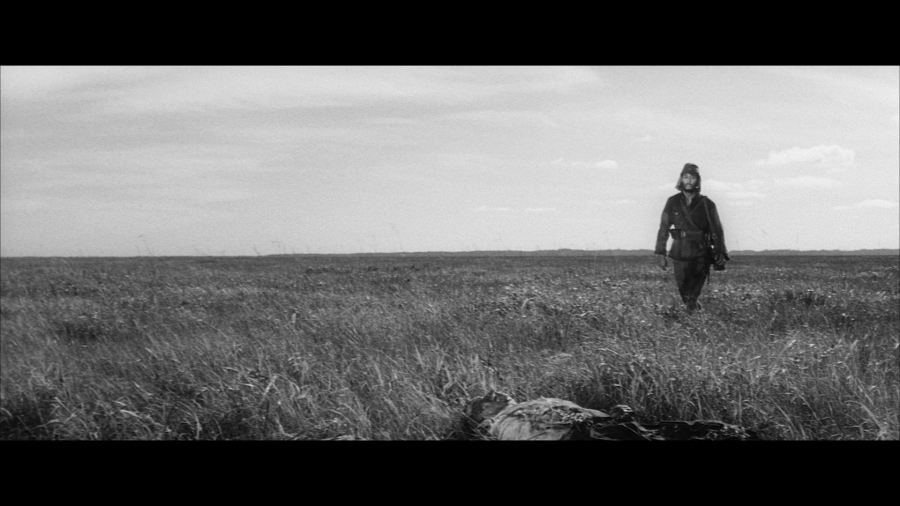 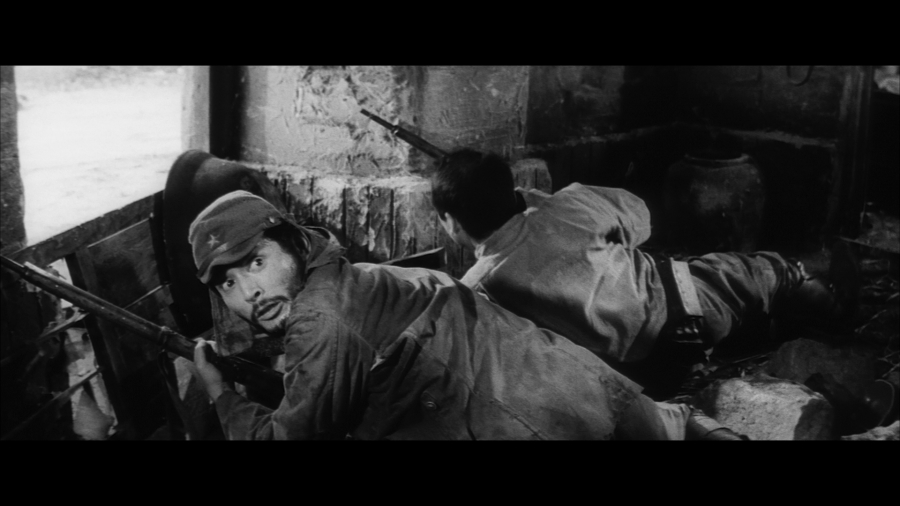 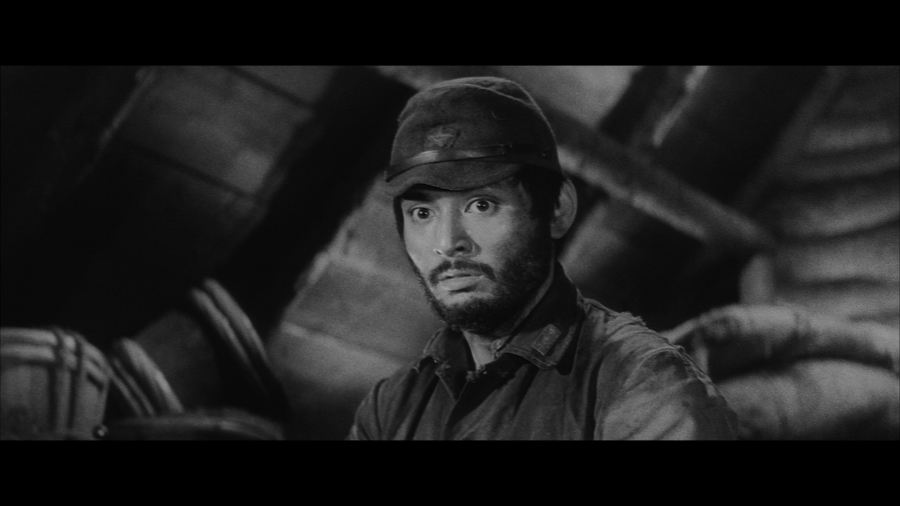 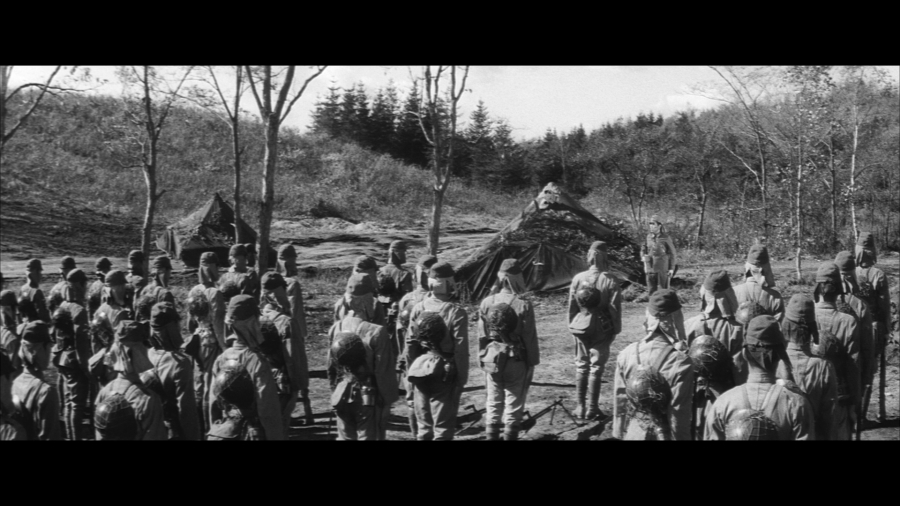 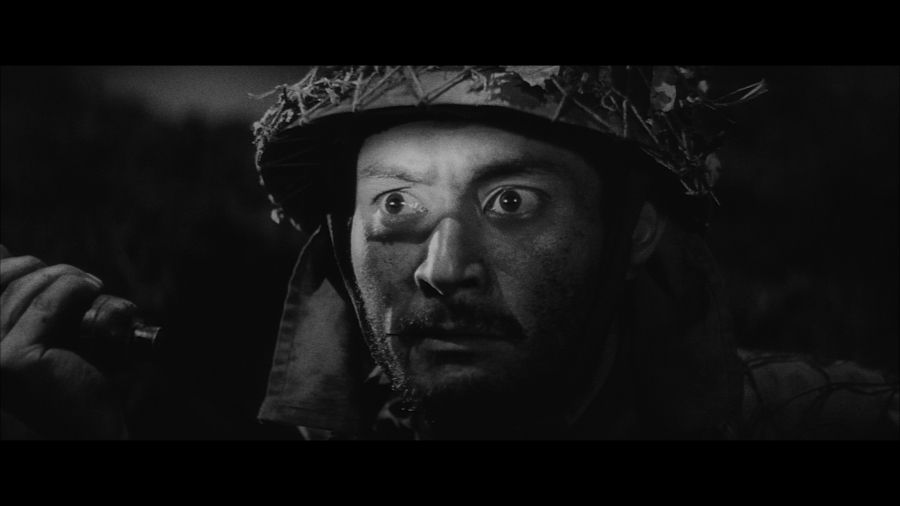 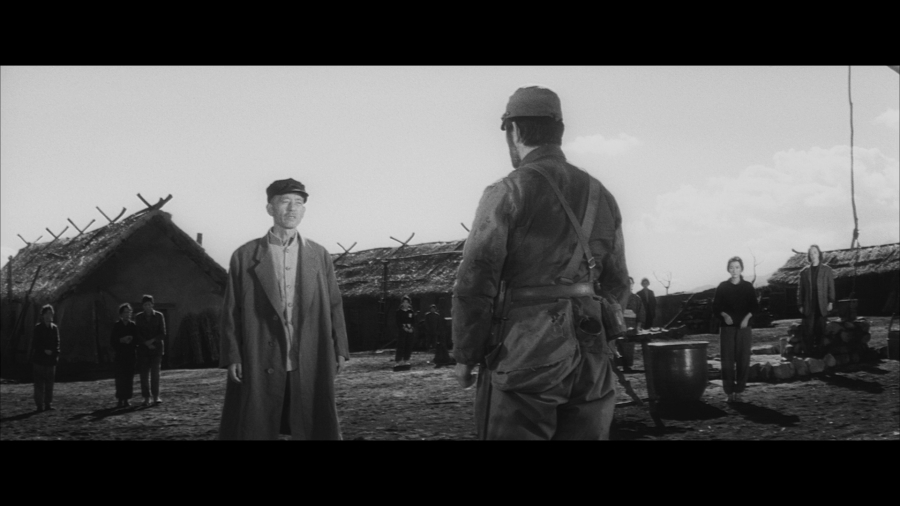 The first two films present lossless 1.0 PCM mono tracks, while the third film presents a lossless 2.0 PCM stereo surround track. Age limitations are the primary issues for the first two tracks, with audio sounding a bit flat and tinny. Some background noise is audible, and a few pops occur throughout. Still, dialogue does sound clear, doesn’t come off distorted, and the music, though flat, didn’t present any glaring problems.

I was again caught off guard when I threw in the third film in, forgetting it actually made use of a surround presentation (the Criterion DVD presented it as a Dolby Digital 4.0 track). It’s an odd mix, though. Sound effects and music do fill out the environment and there is noticeable direction present, like soldiers moving from one side to the other through bushes, where it the sound moves appropriately between speakers. The third part also has a couple of action scenes that actually make decent use of the surrounds. What again threw me off, though, similar to the Criterion DVD, is how voices actually don’t focus entirely on the center channel as I would expect. Instead voices spread out to the other speakers, even the rears, which is an incredibly odd effect since the sound effects themselves don’t do the same thing. Since the Criterion DVD shows the same thing in its presentation I’m taking a wild guess that’s just a side effect with how the mix was originally created. I was able to look past it but it’s really odd at first.

In all, though, the tracks are fine enough, limited either by age or technology of the time.

It’s not a loaded special edition surprisingly; in fact, it probably has less material than Criterion’s already fairly slim DVD edition (slim in terms of supplements I should stress). But, similar to how I felt about that edition (and then moreso with Criterion’s Zatoichi box set) I’m actually okay with that. After almost ten hours (that I admittedly went through over a few days) the last thing I really wanted to do was go through special features.

Arrow does include a handful of on-disc features, all courtesy of Phillip Kemp. He first provides a 20-minute introduction found on the first disc, where he talks about Kobayashi’s career up to The Human Condition, focusing quite a bit on work critical of Japan during the war (special attention is paid to The Thick Walled Room and then his actual service in the Japanese military. He also gives some background to the production and talks about the film’s primary character and his journey.

Kemp also provides commentaries for a few scenes in the film, which are then spread out as separate video features over the three discs, two on each disc. Surprisingly, in total, they only run 32-minutes. I admit that I started thinking “why bother” as I was probably into the fourth one, but there is some good material here, so I’m ultimately glad Arrow did “bother.” The first two, which focus on the train arrival of the Chinese prisoners and the execution scene, allows Kemp to provide some decent pointers about the film’s presentation of Japan’s military at the time and Kaji’s early compromises on his beliefs, foreshadowing things to come. He also talks about a scene censored by the Japanese board in the third commentary. The other tracks don’t live up to the promise of the first couple I guess, though since they’re so short, but they have a few things I wasn’t aware of (like a couple of the Russians were played by Americans), and I did ultimately enjoy them. Kemp’s dry delivery doesn’t really help things along, but he does offer a decent scholarly slant to the release.

As mentioned in the video review, viewers do have the option to view each part as a whole (as it was shown internationally) or in six-parts (each film separated into two films) thanks to seamless branching. As far as I can tell the versions have the same, it just seems to give you the option to break during the midway chapter title cards. Each disc also presents the Japanese theatrical trailer for their respective film.

Arrow also includes a booklet featuring an essay as well as a reprint of an interview with Kobayashi. I did not receive a copy of the booklet (I am working off of check discs and not the finished package) so I cannot comment on it right now, but will update once a I receive it.

So no, not loaded, which would seem odd for such an epic film but I honestly didn’t mind. Kemp’s contributions may be a bit maddening in delivery but they’re otherwise fine. I was more than happy with what was here and I think admirers of the film will be as well. (Note: my grade will reflect the assumption that, as usual, Arrow’s booklet will be at least “very good” and worth the read. Once I see the booklet I will update the grade if I feel that it is needed).

Though maybe open to improvement in a couple of areas I was still very pleased with Arrow’s release of this/these great film(s). The presentation is excellent, clearly besting Criterion’s previous DVD, and I enjoyed the supplements, even if there isn’t much. A highly recommended release! 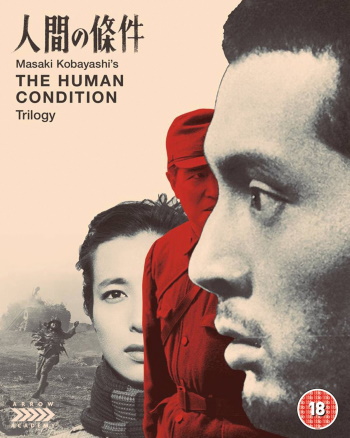 Eclipse from the Criterion Collection

Masaki Kobayashi Against the System (DVD)